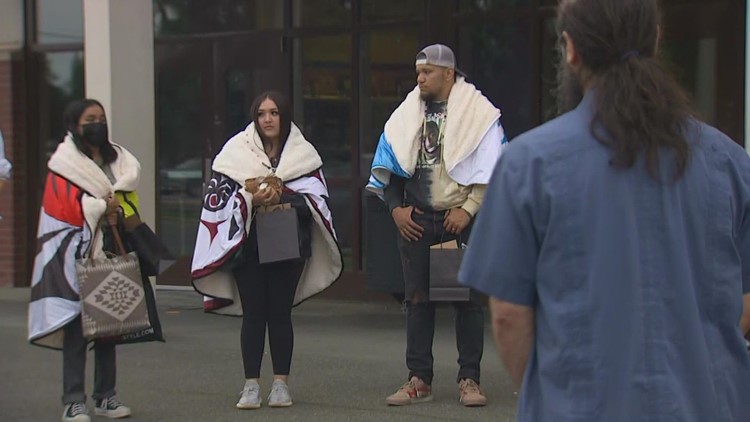 An informal ceremony was held outside Puyallup High School to honor three students who recognized the country’s tribal roots.

“We went into it thinking they wouldn’t have anything recognizing the tribal lands that the school is actually on,” Young said.

For Young and Duenas, that was just unacceptable. So they made sure that didn’t happen.

While Young produced a flag honoring his tribe, Duenas approached class vice president Stephanie Vasquez Pedro and asked her to include the land recognition in her speech.

“I had the platform to advocate for them and amplify their voices and get the land recognition,” Pedro said. “I was ready to face the consequences. I just wanted the Puyallup tribe to get the recognition they deserve.”

Members of the Puyallup tribe held a ceremony honoring the students for standing up and ensuring the tribe was recognized.

Duenas wonders why it was overlooked in the first place.

“I just want to know why they decided to put an end to this now and why they chose to do this behind the scenes and not just put it out there and try to do this on the sly.” she said.

“If this country continues to go unrecognized during the ceremonies, then I feel like we’re going back in time,” Young said. “It’s like they want to wipe us out. But we are still here and want to make sure you still know you are on our ancestral land and respect the tribe.”

The Puyallup Schools District sent KING 5 a statement, saying in part that the district is “trying to understand and address this issue through discussions with representatives of the tribe, and looks forward to sharing Native American history and culture.” honor and indigenous peoples.”

NBC ‘Days of Our Lives’ Spoilers: Clyde makes huge mistake, Will and Leo clash, and Jan might get desperate