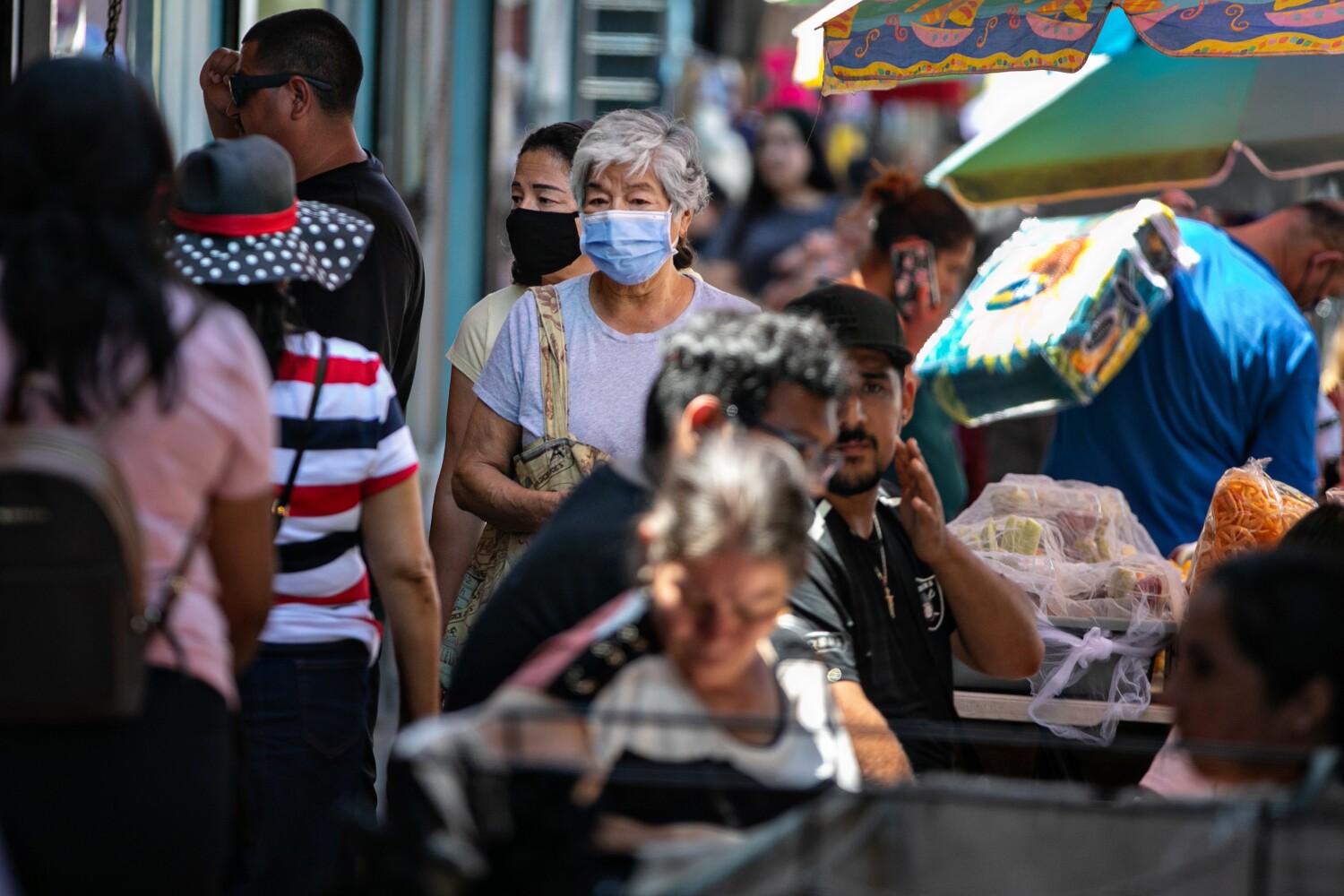 As California suffers another intense coronavirus wave, the prodigious spread of the BA.5 subvariant is increasingly coming into the focus of scientific investigation, with experts saying it could replicate far more effectively than previous versions of Omicron.

Compared to its ancestors, the newest Omicron subvariant, BA.5, may have an enhanced ability to make large numbers of copies of the coronavirus once it enters human cells, a possible factor as to why the Omicron wave occurs in this one summer was problematic.

BA.5 is by far the most dominant version of the nation’s circulating coronavirus, which accounts for an estimated 65% of new cases in the week ending Saturday, according to the US Centers for Disease Control and Prevention. BA.5 arguably combines aspects of last summer’s Delta variant with older versions of the highly contagious Omicron family, Dr. Eric Topol, director of the Scripps Research Translational Institute in La Jolla.

“You may recall the term ‘Deltacron’ being used prematurely many months ago in the pandemic. But the ability to infect cells for BA.5 is more similar to Delta than the previous Omicron family of variants,” Topol wrote in a blog post.

In many ways, this wave of the pandemic has felt different than other Omicron waves earlier this year. Health experts say the behavior of the ultra-contagious strain shows the need for prudent precautions.

Citing a preprint report from Australia, Topol pointed to data in a laboratory study that suggested BA.5 produced far more copies of the coronavirus compared to an earlier Omicron subvariant, BA.2.

“There are more copies of the virus because BA.5 has a much better ability to enter cells…which might explain why this version of the virus has caused a lot of trouble, more so than other Omicron subvariants,” Topol wrote in his post.

If BA.5 maintains its position as the main dominant variant for a while, it could eventually stabilize the situation in California and eventually point to a situation where there will finally be a fall in cases, said Dr. Peter Chin-Hong, an infectious disease expert at UC San Francisco.

However, a possible turning point in this scenario is the emergence of another Omicron subvariant, BA.2.75, which is a cause for concern in India.

“And I know it’s super discouraging,” Chin-Hong said. Still, he said, there are ways to live life while taking steps to reduce risk.

Common measures public health officials recommend include staying up to date on vaccinations and booster shots, taking tests before attending gatherings or events, and wearing masks indoors or in crowded public settings.

Regardless, BA.5 appears to duplicate the earlier Omicron characteristics of “immune escape,” the ability of the virus to escape the human body’s immune response induced by vaccination or previous infections.

The first omicron subvariant, BA.1, which spread quickly across the US after Thanksgiving, already had dozens of mutations that made it difficult for our immune systems to recognize them.

“What has happened now is that BA.5 has overlaid BA.1 with mutations that make it even harder for our immune system to recognize,” Topol said.

Also of concern were initial data from the Australian study that indicated reduced efficacy of Evusheld, a monoclonal antibody, against BA.5.

“Another feature of immune escape is that our monoclonal antibodies don’t work that well,” Topol said.

The question of whether BA.5 leads to more severe diseases in humans has not been clarified.

Data from South Africa suggests BA.5 did not change the risk of hospitalization compared to previous versions of Omicron, Chin-Hong said.

The number of coronavirus cases across the country has been at a consistently high level for months, infecting a significant number of people and disrupting business operations. More and more corona-positive patients are being treated in hospital.

For the week ended Thursday, California was reporting an average of more than 15,500 new coronavirus cases per day. Per capita, that’s about 278 cases per week per 100,000 inhabitants. That’s down about 12% from the previous week, but officials and experts say the apparent decline could be partly due to data disruptions during the July 4 bank holiday weekend.

Los Angeles County’s coronavirus case rate has been relatively stable over the past week but remains high at about 5,400 cases per day. That is 373 coronavirus cases per week per 100,000 inhabitants per capita.

The official numbers are almost certainly a large undercount due to the widespread use of home testing, the results of which are not reliably reported.

Although a significant proportion of these patients are not hospitalized due to complications from COVID-19 and may have tested positive for another reason after seeking medical attention for another reason, officials say they are due to the additional required Services nonetheless place a particular drain on resources to prevent them from spreading the virus.

And as long as transmission remains elevated, healthcare systems are unlikely to see much relief.

“Obviously, with more cases, we’re seeing more people needing medical attention — and not just in our hospitals, but also in our emergency rooms and emergency centers, which are filled with many people needing treatment for their COVID-related illness,” LA County Public Health Director Barbara Ferrer said during a recent briefing.

COVID-19 deaths are also beginning to rise in LA County, from about 50 a week in early June to now nearly 100 deaths a week. At the peak of the Omicron wave that winter, LA County was reporting more than 500 deaths a week.

In previous waves, dominant strains like Delta last summer or Alpha before lasted relatively long and were not quickly displaced by their successors, meaning that someone infected might enjoy a high level of protection for several months.

That time frame has been significantly reduced in the Omicron area. Only since April have three different sub-varieties – BA.2, BA.2.12.1 and now BA.5 – been considered the dominant variety nationwide. This rapid succession means someone can become infected with an earlier release of Omicron and then reinfect themselves with a newer version a few weeks later.

“Many people who have recently been infected can probably get the virus again in three or four weeks, as opposed to the old days where they have a three-month window period,” when re-infection is less likely, Chin-Hong said.

Chin-Hong said he knows people who, after being infected, thought it gave them an opportunity to “go out even more and not worry as much” only to be stuck with reinfection. “That mindset isn’t great when you have the Omicron subvariant changing of the guard,” he added.

While some people remain asymptomatic or have mild symptoms, others report severe symptoms, including high fevers, a raging sore throat and brain fog, and fatigue that can last for weeks — or potentially be the start of a long COVID where symptoms of the disease can last for months or years.

It is also likely that some who have previously avoided contagion are no longer using certain protective measures they previously took, or are exposed to family members and friends who have relaxed their protective practices.

People “take more risks; they move they travel,” Chin-Hong said. Even in San Francisco, a number of people aren’t wearing masks in places where they were once ubiquitous, meaning there’s less peer pressure to wear a mask in areas where it was once commonplace, Chin-Hong said.

These measures are still largely voluntary in many public settings at this time, but the recent spike in coronavirus-positive hospital admissions has brought LA ​​County closer to potentially issuing a new mask mandate that would apply to indoor public spaces. The county already requires masking on public transit and at airports, health care facilities and nursing homes, and workplaces that have had three or more coronavirus cases in a two-week period.

If current trends continue, LA County could transition from the mid-level COVID-19 community — defined by the U.S. Centers for Disease Control and Prevention and Factors in Case and Hospitalization Rates — to the high level as early as Thursday .

If the county is in the high COVID-19 community level for the next three consecutive Thursdays, health officials are poised to implement a new universal mask mandate in indoor public spaces for those ages 2 and older beginning July 29.

Once seen as a trailblazer, Kevin de León tumbles after leaked racist tape

California opens the door to suing gun makers and dealers