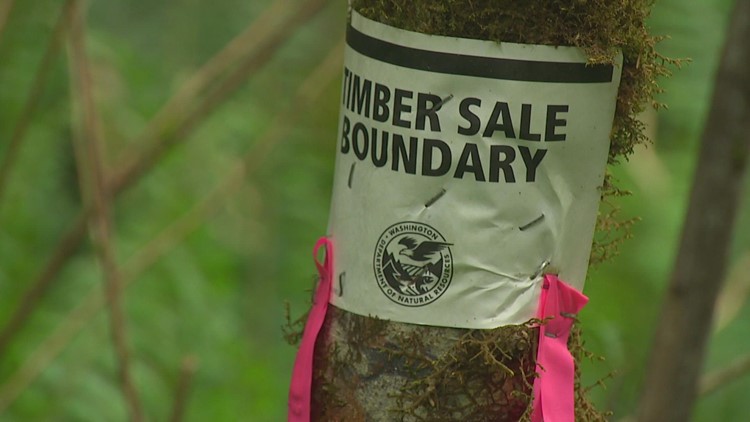 A DNR spokesman said the project will likely be delayed rather than cancelled.

THURSTON COUNTY, Wash. – The Washington Department of Natural Resources is putting plans to harvest 16 acres of timber on hold after concerns were raised by Thurston County neighbors and commissioners.

The property near Summit Lake was set to be auctioned for harvest this summer. Last week, Thurston County Commissioners sent DNR a letter raising concerns about the potential project’s environmental impact, including landslide risks and potential water and soil runoff into homes and the lake below the property.

“The research on which the county’s letter is based does not use the best available applicable science,” said Kenny Ocker, spokesman for the DNR.

He said there was a “very low” risk that the project will cause geological problems or water quality problems, but the state will look into the claims.

While the state has withdrawn its application for the project, the harvest is likely to still take place, perhaps in the fall, according to Ocker.

The trees, mostly alder, are on state trust land. Ocker said state and federal laws permit the sale of lumber on these properties to support the state, typically in the form of education funding.

Most of the proposed sale near Summit Lake would go to the University of Washington, Ocker added.

JC Davis, who lives next door to the state-owned property, said, “It felt really good” when he heard the state was reviewing the county’s claims.

Davis and his wife started an online petition urging the state to cancel the sale. His family has owned a lakeside property surrounded by woods since the 1950s.

“If we take away what makes it so peaceful, it becomes less special,” Davis said.

He knows the state has the legal right to sell the trees on the land next to his home. The state harvested it in the 1950s. He said that doesn’t make it right.

“I think it’s time for them to take a look at their old policies,” Davis said, “that mindset isn’t for the modern world.”

Davis said he and others in the neighborhood will ask the state to cancel the sale at Tuesday’s State Board of Natural Resources meeting.

‘Methuselah’ bristlecone pine may no longer be world's oldest tree