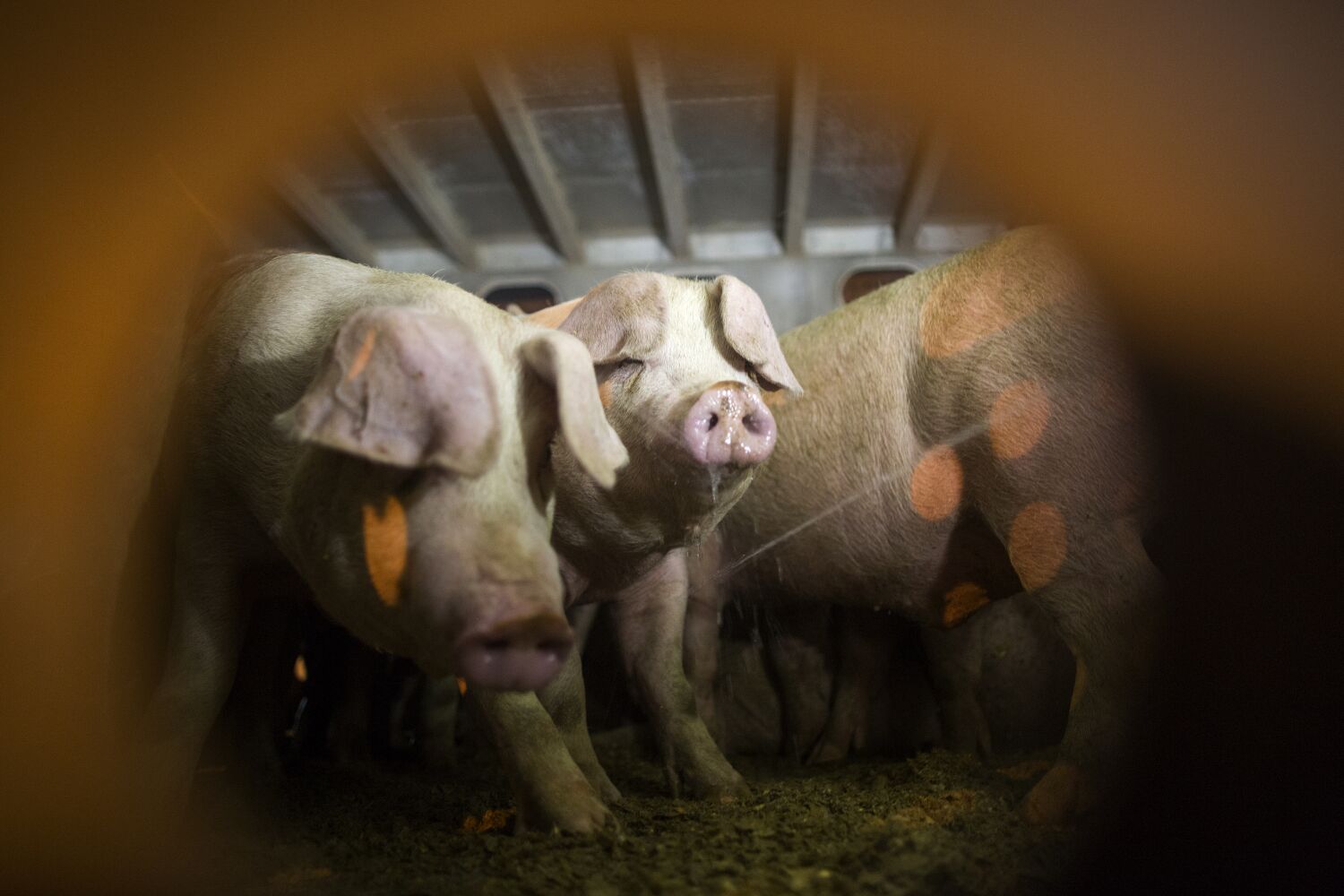 The Supreme Court on Tuesday will hear the pork industry’s challenge to a California animal welfare law that would prohibit breeding pigs from being confined in cramped metal cages for most of their lives.

Two general questions are at stake: Can a state enforce regulations within its borders that force companies in other states to change their practices? And can voters insist on standards of morality and decency that include the humane treatment of animals?

In 2018, 63% of California voters approved Proposition 12, a ballot measure to ban the sale of eggs or meat derived from extreme farming of laying hens, breeding pigs or veal. The law should come into full effect this year.

While some of the biggest meat packers, including Hormel and Tyson, said they could comply, the National Pork Producers Council sued, claiming the law was unconstitutional because it would require farmers in the Midwest and North Carolina to use the species and changing the way they raise and restrict their breeding pigs.

California produces less than 1% of the pork sold in the state, producers told the court, but “Prop. 12 will change the pork industry nationwide.”

To comply with California law, breeding pigs would need to be given larger pens in which they could stand and turn around, or they could be confined in an open area with other pigs. Manufacturers said these changes would increase their costs by 9%.

“The practical implication of Prop. 12 is that commercial activity outside of California must comply with California regulations, and therefore [it] is extraterritorial regulation of the $26 billion interstate pork market. Consumers across the country will pay for California’s preferred sow management practices,” they told the court.

The pork producers lost before a federal judge in San Diego and the 9th Circuit Court of Appeals, who said they had no constitutional claim. But in March, the Supreme Court agreed to hear the industry’s appeal, and the Biden administration sided with the pork producers in the case.

“California has no legitimate interest in the welfare of animals outside of the state,” said Solicitor General Elizabeth B. Prelogar. “States may not otherwise regulate extra-state entities by banning products that do not pose a risk to public health or safety based on philosophical objections to extra-state production methods or public policies that have no impact on the regulating state.”

In defense of the law, prosecutors said the law governs what happens in California.

It “only restricts the products that companies want to sell within California borders,” they said. “With the approval of Prop. 12, California voters chose to ban the sale within the state of pork products they considered immoral and potentially hazardous to human health.”

The California attorneys also claimed that the pork producers challenging the law do not represent the entire industry, noting that three years ago “nearly a third of the country’s pork industry had switched to sow farms to allow for group housing” in which Breeding pigs could be bred to roam freely.

“Pork produced this way can be marketed as ‘crate-free’ under USDA regulations” and separated from other pork products, they said.

The Constitution states that Congress “may regulate commerce … between the various states.” Congress hasn’t ruled the housing of breeding pigs, but the court overturned state laws aimed at protecting businesses from outside competition. In contrast, in this National Pork Producers vs. Ross case, the court will decide whether a state law is unconstitutional because it will have strong regulatory effect in other states.

The United States Humane Society and several animal rights groups have challenged the Justice Department’s claim that Californians have no “legitimate” interest in preventing cruelty to animals.

“California citizens do not want to be complicit in patronizing or condoning the abuse and cruel treatment of these intelligent, social animals,” wrote Katherine A. Meyer, director of the Harvard Animal Law and Policy Clinic.

She noted that in the Dobbs v. Jackson Women’s Health Organization decision overturning Roe v. Wade, the court said that issues of “profound moral and social significance” were “clearly” left to the people. If so, she said, “Californians should be able to choose not to be complicit in such blatant animal cruelty in relation to the food sold in their state.”