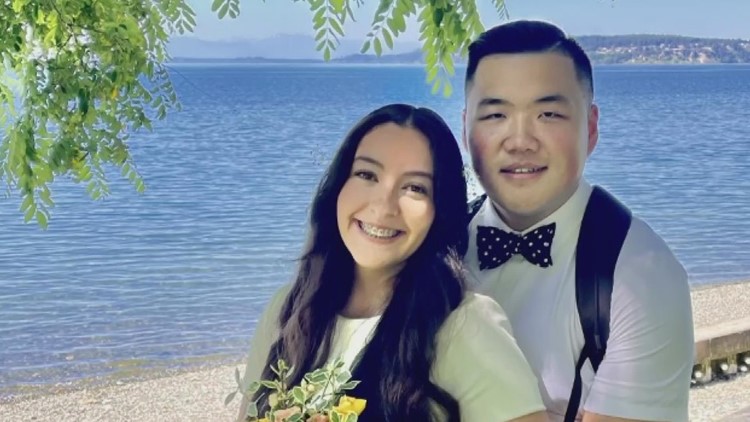 The couple was already engaged, but they decided not to wait any longer to get married after walking away from the accident with only minor injuries.

BOTHELL, Wash. — Their love story picked up steam years ago, but it was cemented on a Bothell street.
The light aircraft Allen Kang and his fiancee Rosseana Morales crash-landed in Bothell on July 20 after losing their engine.

“The engine was off,” said Kang, who was piloting the experimental plane.

“The seatpost was at the limit,” added Morales, who was in the cockpit with him.

It all started when the couple took their plane home from Tacoma to Everett after visiting friends.

As the engine died, the plane began to fall.

“First I got a (gasp) how scary that is,” said Morales, who has a background in aviation. “I just remember telling everyone you were training for it. ‘I love you, just glide. Let’s find the best place to land.’”

Paine Field was still about 10 miles away and Interstate 5 was full of cars.

The next best option was 228th Street Southeast—a busy Bothell arterial road during the day but less busy at night.

Surrounded by streets and subdivisions with hundreds of houses, Kang made the decision to drop the plane.

“What’s going through my head is that the freeway is full and I’m not taking anyone with me. It’s us and nobody else,” said Kang, who has been flying for six years.

They cut some power lines but suffered only minor injuries.

“To be honest, I see him as my hero,” Morales said. “He’s a hero who saved so many lives that night. I think that made our relationship a lot stronger.”

So strong that the couple married on the beach in Steilacoom just 5 days later.

They were already engaged and planning to tie the knot in about a year, but after walking away from a plane crash together…why wait another minute?

“In the end we thought we had just survived the worst that can happen. Let’s do it,” the couple joked.

Now the pilot and co-pilot begin life as husband and wife; the ultimate wedding crashers.

“It’s a very scary moment, but one that has helped me appreciate my life more and appreciate our relationship,” said the newly named Rosseana Kang.

“I can’t imagine what I would do if I were alone,” her husband added. “I was lucky to have her with me.”

The NTSB and FAA are still investigating the cause of the engine failure.

There’s a GoFundMe helping with the couple’s medical bills.

https://www.king5.com/article/news/local/bothell-plane-crash-survivors-marry/281-38866ebe-ae00-4360-9cc1-e9475ac9831a Survivors marry after walking away from Bothell plane crash