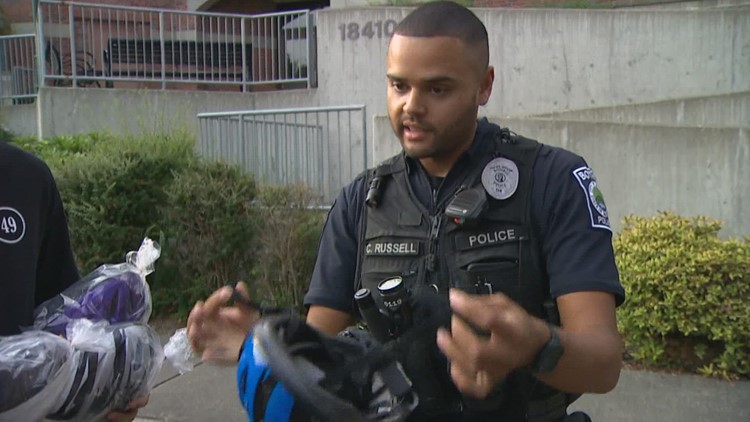 A Bothell police officer gave out free bike helmets with the help of a man whose story helped generate state funds for helmets.

BOTHELL, Wash. — Two men who, in their differing experiences, survived a traumatic brain injury handed out free helmets to children in Bothell on Friday in hopes their stories can make a difference.

Coby Russell suffered a head injury after being hit by a car when he was 8 years old.

‘Left in the middle of a road. Suspect drunk driving, not sure,’ Russell said.

Russell said he was walking his bike to hang out with friends when he was hit. He had to learn to walk again and is still struggling with memory problems.

“Pretty bad memory loss when it comes to names and dates,” Russell said.

The experience prompted him to consider a career in law enforcement, specifically to confront DUIs. Russell studied criminal justice at Washington State University and has been an officer in the Bothell Police Department for two and a half years.

On Friday, he was handing out bike helmets to children during a cultural event at Bothell Town Hall. What made his effort even greater was who was with him.

Russell was joined by Ryker Schellings, another survivor of a serious head injury.

In 2019, Schellings suffered traumatic brain injury after falling while skateboarding near Greenlake in Seattle. Since then, Schelling has made progress in his recovery.

“I want to encourage all people and all people to save your brains and wear your helmets,” Schellings said.

KING 5’s coverage of the Schellings story helped generate government funds for first responders to distribute helmets, which the Bothell Police Department participated in by giving away an estimated 100 helmets to the community.

For Russell, the endeavor is as fulfilling as it is important.

“If you fall and scrape your knee or elbow, it will heal. But the brain is going to be a much more difficult journey and if we can hand out as many helmets as we can to make sure that doesn’t happen to anyone, perfect,” Russell said.

Panic! at the Disco return to the stage

Unsafe speeds and reckless driving: Deadly Windsor Hills wreck 'is the tip of the iceberg'

How the Climate Elite Spread Misery

Photos: Summit of the Americas puts Los Angeles in the spotlight