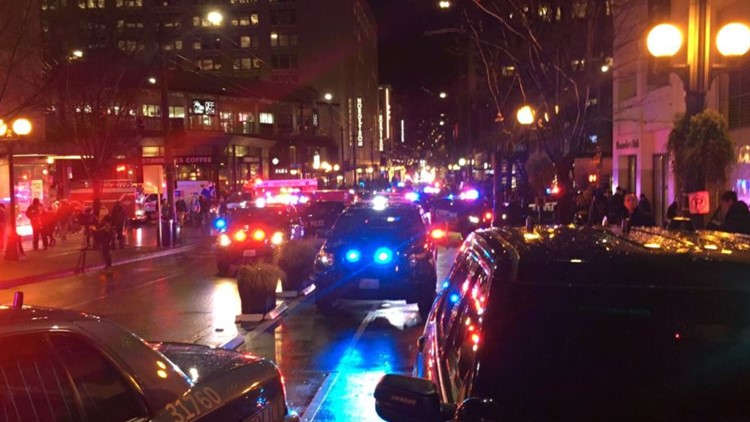 Prosecutors argued that Marquise Tolbert was with William Tolliver when they were involved in a shootout with Jamel Jackson.

SEATTLE — One of three defendants accused of involvement in a deadly shooting in downtown Seattle in 2020 has been found not guilty by a jury of murder and assault.

Marquise Tolbert and William Tolliver were charged with six counts of first-degree murder and first-degree assault.

Tolbert was also charged with first-degree unlawful possession of a firearm. He was found guilty of those charges and sentenced to 48 months in prison – a judge gave him about 31 months that he had already served.

Tolliver was also charged with second-degree unlawful possession of firearms.

Prosecutors argued Tolbert was with Tolliver when they were involved in a shootout with Jamel Jackson on January 22, 2020 at the corner of Pine Street and Third Avenue.

Jackson told a judge he was inside the McDonald’s before stepping outside and exchanging words with the two before shots were fired. Jackson told the court Tolliver fired first, hitting Jackson in the right thigh. Jackson said he drew his gun when he saw Tolbert’s gun.

Tolbert’s attorney argued that Jackson drew his gun first and Tolliver fired first. “Marquise Tolbert was not the first to shoot. He wasn’t the second to shoot. And if he did, it was because he was trying to save his life,” said Tolbert’s attorney, Emily Gause.

The firefight took place during rush hour. Six passers-by were injured. A woman walking in the area was killed.

WATCH: Father of son shot in gunfight testifies in court