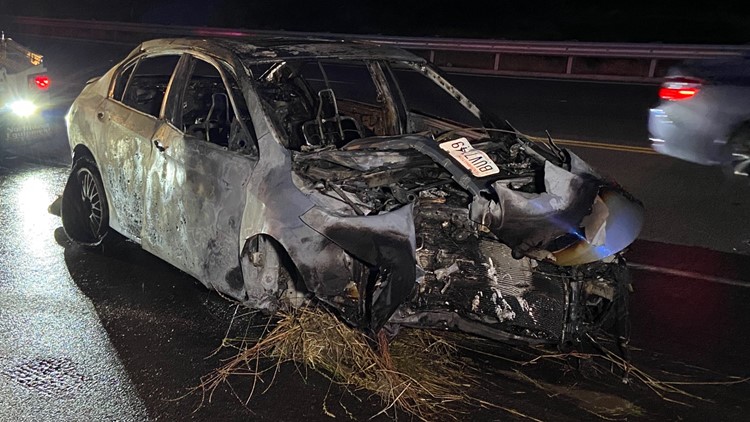 Police said someone in a stolen BMW shot a man’s vehicle on Wapato Way East after an altercation at a traffic light and then drove the vehicle off the road.

FIFE, Wash. — A 50-year-old man was taken to the hospital early Wednesday morning after a fire accident near Interstate 5 in Fife. Police said someone in a stolen BMW Shots fired at the man’s vehicle on Wapato Way East after an altercation at a stop light and then drove the vehicle off the road.

The BMW, which police said was stolen from Bellevue, was found fully aflame on Pacific Highway East about a mile from the accident.

Police were alerted to the incident around 3am after receiving a report of a vehicle off the road near the Wapato Way flyover, according to Fife Police Sergeant Tom Thompson.

The victim’s vehicle struck a roadside guardrail and knocked over a street lamp before descending the embankment and catching fire.

The 50-year-old man was taken to Tacoma General Hospital with unknown injuries.

Shortly after police arrived at the scene, a vehicle matching the description of the suspect vehicle was found about a mile away on Pacific Highway East near Porter Way, completely ablaze. Police believe the stolen BMW was intentionally set on fire to destroy evidence.

This is the car believed to have been dumped by the suspect and set on fire. That was on Porter Way in Milton. @FifePD confirms that it is a stolen BMW from Bellevue. They currently have no suspicious descriptions. @KING5Seattle pic.twitter.com/HIZHgMvnBw

“There is no reason this vehicle caught fire other than that it appears it was likely set on purpose,” Thompson said.

The 50-year-old told police he didn’t know who the person in the stolen vehicle was.

So far, no suspect description has been released. Anyone with information or who has witnessed the incident is asked to contact Fife Police.

https://www.king5.com/article/news/crime/fife-shooting-wapato-way-east-car-fires/281-7e46ab4e-a5c5-42f8-a7bb-cb5272c02729 Suspect in stolen BMW accused of shooting at car, running it off the road before setting BMW on fire in Fife