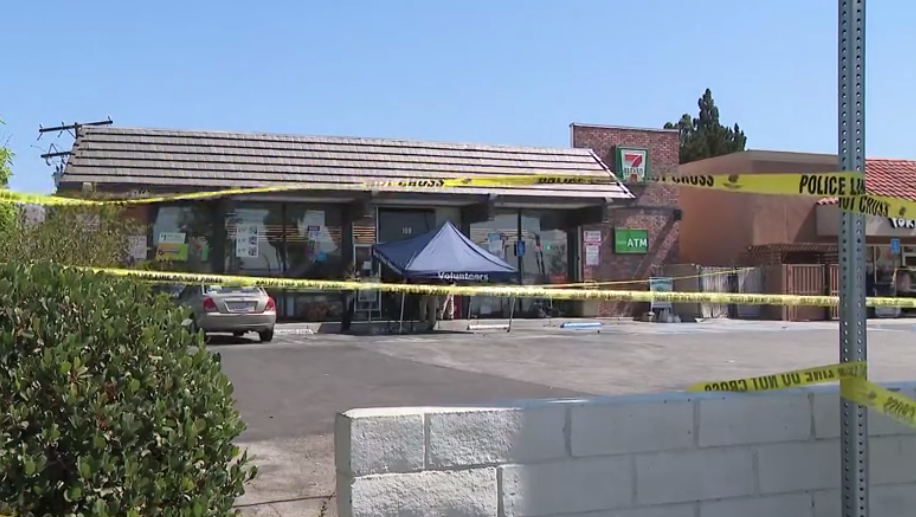 Police are looking for a suspect after six 7-Eleven stores were robbed in Southern California, killing two and injuring three others in shootings. Authorities believe at least four of the robberies were linked.

“Our hearts go out to the victims and their families. We are gathering information about this terrible tragedy and are working with local law enforcement,” 7-Eleven said in a statement from KTLA-TV Channel 5. “Right now, our focus is on the safety of franchisees, employees and customers.”

The robberies in Brea, Santa Ana and La Habra – and possibly more – could be linked, Lt. Brea Police Department’s Chris Harvey. A male suspect with a similar description was cited in all three of those robberies involving gunshots, Harvey said. The suspect was last seen wearing dark clothing and a dark mask and fled before officers arrived at the scene.

Riverside Police Officer Ryan Railsback confirmed that the Riverside shooting appeared to be connected to the others.

“Our detectives work closely with the other law enforcement agencies investigating these crimes,” Railsback said.

The first robbery took place in Ontario. According to a press release, police were dispatched to the 7-Eleven at 636 N. Vine Ave. shortly after 12:00 p.m. Monday following reports of a robbery. called.

“During the robbery, the suspect showed a pistol and demanded money from the clerk,” Ontario Police said in the press release. “However, the suspect did not fire the pistol and the victim was not injured in the incident.”

About 40 minutes after the Ontario robbery, police responded to another at the 7-Eleven at 2410 W. Arrow Route in Upland. No shooting was reported in this robbery.

According to Railsback, at 1:50 a.m. in Riverside, a customer was shot dead during a robbery at the 7-Eleven on the 5100 block of La Sierra Avenue.

“The suspect pulled out a gun and robbed the clerk,” Railsback said. “The customer was way ahead. After robbing the seller for unknown reasons, the suspect shot and killed this customer.”

The victim, in his 40s, was treated by paramedics from the Riverside Fire Department and taken to a hospital, according to a press release. Railsback said he was in serious condition.

Less than two hours after the Riverside robbery, Santa Ana police responded to reports of a shooting outside a 7-Eleven on the 300 block of East 17th Street.

Matthew Rule, 24, of Santa Ana, was shot and killed in the parking lot around 3:25 a.m., police said. He sustained a gunshot wound to the upper body and was pronounced dead at the scene.

Police believe the suspect robbed Rule and did not enter the store. It’s unclear if Rule was a customer of the 7-Eleven or why he was there.

Shortly thereafter, at 4:55 a.m., La Habra police responded to a robbery at the 7-Eleven on East Whittier Boulevard, where police found two victims, the employee and a customer, with gunshot wounds, according to a press release. They were taken to a hospital by paramedics from the Los Angeles County Fire Department. La Habra Police said both are expected to survive.

“There have been several 7-Eleven robberies, and a handful of them have had shootings as well,” Harvey said. “The initial belief is that ours and those of La Habra and Santa Ana are all connected, but that’s not confirmed yet and I expect there will be more.”

On Tuesday, Los Angeles police said they were looking for a man believed to be connected to four armed robberies at convenience stores and donut shops early Saturday in the San Fernando Valley. The suspect was also described as wearing dark clothing and a black face covering and brandishing a handgun during each robbery, police said.

Investigators have not linked those raids to those at 7-Eleven stores two days later, but assistant chief Alan Hamilton said they are not ruling out the possibility that the incidents are related.

Try the Del Taco drive-thru on foot: L.A. without a car