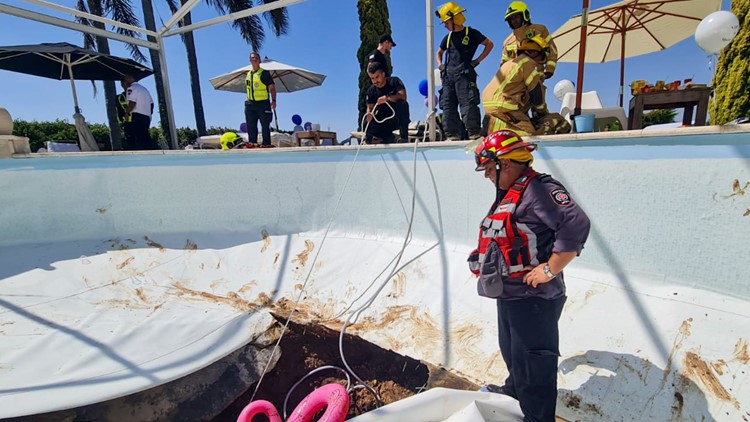 The fatal incident happened at a pool party in Israel. Video from the scene shows the sinkhole quickly swallowing everything, including water and inflatable toys.

WASHINGTON – The body of a man who was sucked into a huge sinkhole that opened at the bottom of a swimming pool in Israel has been recovered and a couple have been arrested in connection with his death, Israeli news agencies report.

The Jerusalem Post reported that it took rescue workers several hours to find the 32-year-old man, who was pronounced dead after being discovered at the bottom of a 15-meter (nearly 50-foot) tunnel.

The man has been identified as Klil Kimhi from Tel Aviv. His exact cause of death was not determined. The hole reportedly opened spontaneously during a company pool party at a villa in Karmei Yosef, Israel.

The couple who own the villa, a man and woman in their 60s, were arrested Thursday night and are suspected of causing the death through negligence, police said. A court ruled on Friday to release her under “restrictive conditions of house arrest” for five days.

Ynet News reported that the tunnels that opened up under the pool were in danger of collapsing, slowing rescue efforts as crews worked to reinforce them. A rescue dog was also used in an attempt to locate Kimhi.

Video of the sinkhole shows water and inflatable toys being rapidly sucked into a hole in the bottom of the pool while people walk and stand near the edge of the gaping pit and scream in Hebrew as people seated at the pool’s edge. A man approaches the hole, slips and is nearly pulled in before backing away.

A 34-year-old man who was also at the party fell into the pit but suffered only minor injuries, local media reported. Newsweek reported that four other people managed to get out of the rapidly emptying pool without being sucked in.

Israeli media, citing witnesses who said the party was attended by nearly 50 people, six of whom were in the pool, also reported that the homeowner built the pool without proper permits.

Sinkholes often form as a result of geographic faults or cracks in the ground that allow water to pool below the surface. As this water evaporates or dissolves into the surrounding soil, it leaves a cavity in the ground that can collapse under pressure.

Professor Shmuel Marco of Tel Aviv’s geophysics department told Ynet News that the sinkhole was likely the result of human intervention, possibly during the construction of the pool.

“It’s likely that water seeped under the pool and eroded the soil there,” he told the outlet. “There are no known natural sinkholes in this area.”