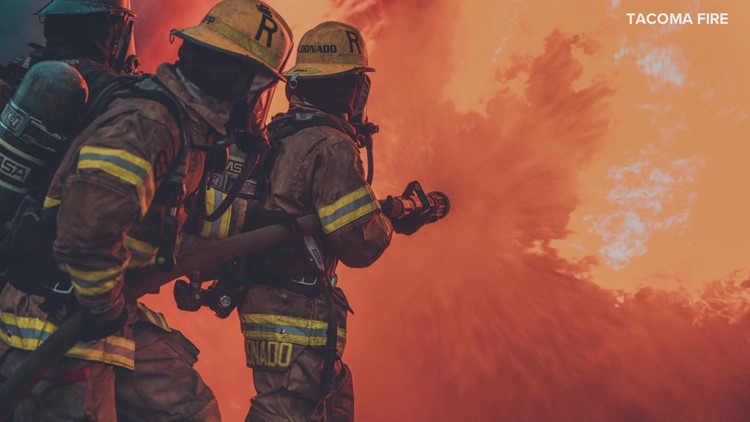 They fight the flames, they rescue accident victims, they leave in the danger is not gone.

But just as often, they are severely affected by work.

Tacoma Fire Chief Tory Green attributes some of the stress to an increase in call volume in recent years.

“We recognize that many of our employees have suffered,” Green said.

The department oversees an area of ​​approximately 240,000 people that includes the cities of Tacoma, Fife and Ficrest. On any given day, the fire department ensures that there are at least 79 firefighters on duty.

Green said the strains were severe, adding that 37% of firefighters across the country are clinically qualified with post-traumatic stress disorder, or PTSD.

Green, a nearly 30-year veteran at the Tacoma Fire and made chief in 2019, said he learned that more of his employees were seeking help from the department’s peer support team, which provides mental health counseling and support.

Working with the support team and the firefighters union, Green developed a plan to produce a video to promote mental health awareness.

“The whole point of this video is to remove the stigma that prevents people from seeking help,” Green said.

In September 2021, Green reached out to Tacoma Firefighter Cody Shea, who is a videographer hobbyist and had previously produced a short video for the department.

Shea is a five-year Tacoma Fire veteran and previously worked as an EMT in Seattle. But he returned to his roots in Tacoma.

Shea interviewed several members of the department and quickly realized that he had a story that would take more than five to seven minutes to tell.

“I realized very quickly that this is a darker side of the job. It’s something that doesn’t get a lot of airtime,” Shea said.

The video became an hour-long documentary entitled The Call We Carry. It contains accounts of what firefighters regularly see at work.

“We have a front row seat to trauma every day. So when people come to work today, they are not responding to good events. They react to everyone else’s bad events,” Green said.

The film was screened among faculty members and will be shown publicly in October.

For Shea, the project went beyond documenting the experiences of his colleagues.

“It immediately piqued my interest because I have a lot of experience with it, with myself and my family members, basically just a firefighter kid,” Shea said.

Shea’s parents are retired firefighters from the Seattle Fire Department. They witnessed the same hardships of the job, only back then, Shea said, they had even fewer resources to seek mental health help.

“The culture that both of my parents were in their prime in the early ’90s was that the stigma of being firefighters was rampant in Seattle. When you’re struggling with things, you haven’t really talked about it. You kinda just suck it up, put on a smile, put on your uniform and you go back the next day,” Shea said.

Shea said he hopes his film can let his colleagues know that there are solutions to deal with the stress of the job.

“We didn’t want to leave people in the dark. We wanted to show them the light at the end of the tunnel and I think we succeeded,” said Shea.

The Call We Carry will be showing October 4-6 at 6 p.m. and 8 p.m. at the Blue Mouse Theater in Tacoma. Tickets are free and available here.

If you or someone you know is in crisis, you can call the National Suicide Prevention Hotline 988. It is available 24 hours a day.