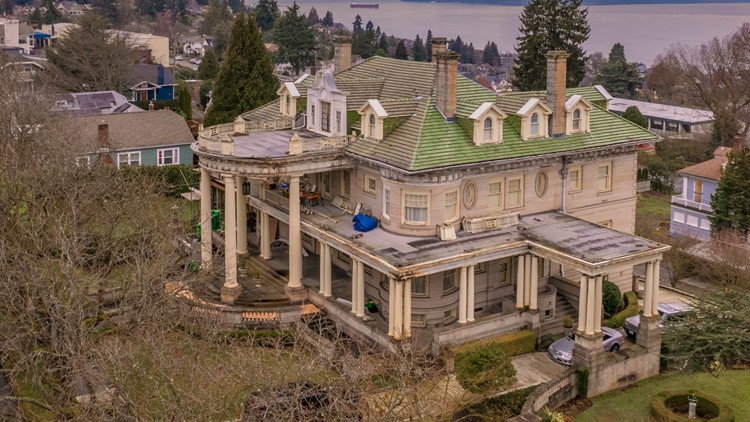 The new owner, Ashley Burks, wants to launch the “White House of the West” by the summer. #k5evening

TACOMA, Wash. — For years, Ashley Burks has admired the Rust Mansion from afar.

“It’s royal,” she said. “It’s big. It has a lot of history. It’s an amazing piece of property. It’s an iconic piece of Tacoma.”

And now, after a $2.5 million private sale, the real estate developer owns the home. Burks gives himself only a few months to restore The White House of the West to its former glory.

“This is a massive undertaking, to say the least,” Burks said. “But I knew I had to do it and I wanted to do it.”

For Burks, this is an affair of the heart in more ways than one. She dedicates the project to commemorate her late husband, Bryan Meade, who died of a heart attack in 2017 at the age of 36.

“He had a saying, ‘You can do anything you put your mind to. You just have to put your energy into it,'” Burks said.

Burks will not be renovating this six-bath, seven-bedroom home alone. She works with general contractor Sam Calabrese, who says the work is almost entirely cosmetic, but the biggest challenge is replacing materials with something appropriate.

“A lot of this stuff was handmade,” Calabrese said. “It’s just not something you could go to Home Depot and take off the shelf, so that was certainly a challenge.”

Calabrese is hammering away at the cladding and working on the front of the house. Neighbors pass by, wondering what’s going on. Many in Tacoma feel a sense of belonging to this house.

The Rust Mansion was built for one of the wealthiest men in the Northwest. Smelter King William Rust and his family moved into the 18-room house in 1906. The entire top floor served as maids’ quarters.

“This is one of the bedrooms in the maids’ quarters,” Burks said during a tour that takes us into a room covered in debris. “As you can see, it’s quite a lot of work. We have been actively removing wallpaper that is already peeling and its accompanying adhesive and we need to repaint the walls. It looks like a mess now but it’s going to be great when we’re done.”

Burks has a vision for the home. She does not plan to modernize or modify. She uses historical photos as a point of reference.

In the 1970s the mansion was converted into apartments. Floors were damaged. Bathrooms have been rendered useless. But in every room there are traces of a glorious past.

“Throughout the house you’ll find green, gold and pink,” she said.

It’s true. Pink flowers appear on stained glass, etched in a fireplace design and on wallpaper.

“Honestly, it adds a lot of character,” Burks said.

A project like this means Burks gets a hundred questions every day. But their answers are all based on a painting of the Rust Mansion hanging in the living room. It’s the idealized version of the house she’s trying to bring to life in a matter of weeks.

KING 5’s Evening will follow the revamp in a series of stories to air over the course of a few months.

Morrison House/Sotheby’s International Realty is the exclusive agent for the Rust Mansion.