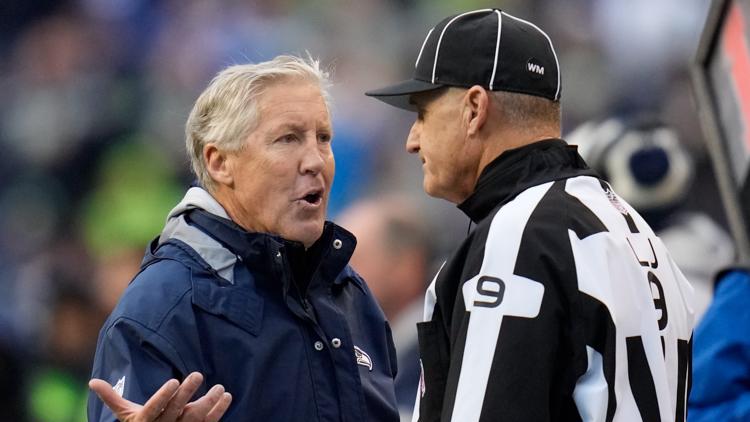 The Seahawks’ division title chances were dashed Sunday with a loss to the Panthers, who were winless on the road earlier this season.

SEATTLE — It was another slow start for the Seattle Seahawks on Sunday as the unassuming Carolina Panthers took a 17-0 lead at Lumen Field.

Despite some uncharacteristic mistakes in the first half, Geno Smith put the Seahawks back in the game with two touchdowns in the second quarter.

The comeback effort ultimately failed for the Seahawks, further hurting the team’s chances of catching the San Francisco 49ers in the NFC West title race.

Here are three takeaways from the week 14 defeat:

Tyler Lockett set a franchise record with a touchdown catch in his sixth straight game and made one of Smith’s two scoring passes in the first half.

Since 2015, Lockett has contributed regularly to the passing game and continues to lead the Seahawks with his work on and off the field.

The Walter Payton Man of the Year Award nominee has been an integral part of this season’s seamless transition from Russell Wilson to Geno Smith for the Seattle offense.

The Seahawks struggled to keep a healthy run back on the field in their narrow win over the Los Angeles Rams last week, and Seattle’s inability to move the ball on the ground again plagued Sunday’s offense against the Panthers.

Travis Homer led the Seahawks with just 26 rushing yards as both Kenneth Walker III and Deejay Dallas were sidelined through injuries.

Geno Smith had his worst performance of the season on Sunday and will need more consistency from the running game to keep his balance with the Seahawks offense.

This continues to be a trend for the Seahawks. Week 14 was the Seahawks’ fourth straight game to rush for at least 150 yards and the second of the last three in which Seattle’s opponents surpassed 200 yards on the ground.

Carolina is far from an elite offensive rushing unit, yet both Chuba Hubbard and D’Onta Foreman individually surpassed 70 yards and the Panthers rushed for 224 yards.

LeBron James says Lakers ‘are who we are.’ They stink