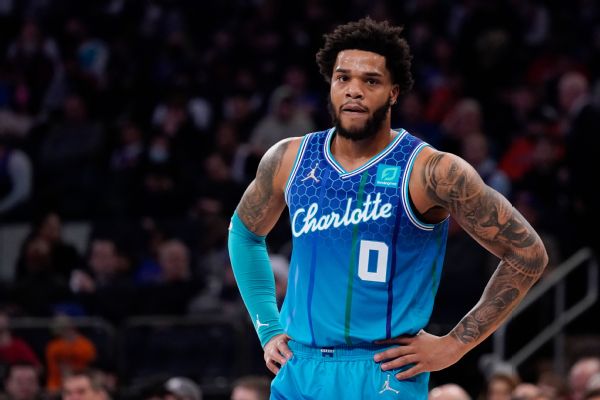 The Charlotte Hornets and restricted free agent Miles Bridges are gaining momentum in talks for a new deal, and there is optimism a settlement could be reached in the near future, sources told ESPN on Friday.

Apparently, the sooner Bridges and the Hornets can reach an agreement, the sooner he can begin serving an NBA suspension, which is expected to be imposed for his role in an off-season domestic violence case. Bridges, who was accused of assaulting his then-girlfriend in June 2022 in front of her two children, pleaded guilty to a felony charge in November and received a three-year suspended sentence rather than jail.

Bridges’ case remains under investigation by the league and it’s unclear how long he faces a ban, sources said.

Bridges, 24, and his representatives at Klutch Sports have been in constant contact with the Hornets organization and the sides are working together on Bridges’ plans to work with local domestic violence groups and community organizations to help re-adjust to the Charlotte community.

If an agreement cannot be reached with Bridges, he would remain a restricted free agent this summer in a market that includes teams with ample salary cap room and need to improve the wing position of their rosters.

The NBA suspended former Charlotte player Jeffery Taylor for 24 games in 2014 after he pleaded guilty to charges of domestic violence.

As a restricted summer free agent, Bridges was believed to be close to signing a $100 million offer sheet that Charlotte would likely have adjusted to keep him. The arrest and charges have changed that calculus, and now Bridges is working out the details of a new deal directly with Charlotte.

The Hornets, who came into play 8-24 on Friday, have struggled without Bridges, the team’s top scorer last season, as other key players have lost time to injuries.

Bridges accepted the punishment and conviction without officially pleading guilty in the case. He was arrested by Los Angeles Police Department on June 29 on a domestic violence warrant and was later released on $130,000 bail. In July, Los Angeles County District Attorney George Gascon’s office filed three domestic violence charges against Bridges — who initially pleaded not guilty to all three.

During his three-year probation, Bridges must complete 52 weeks of domestic violence counseling and 52 weeks of parenting classes, and do 100 hours of community service.

Dodgers release Trevor Bauer: Risky move, but the right one