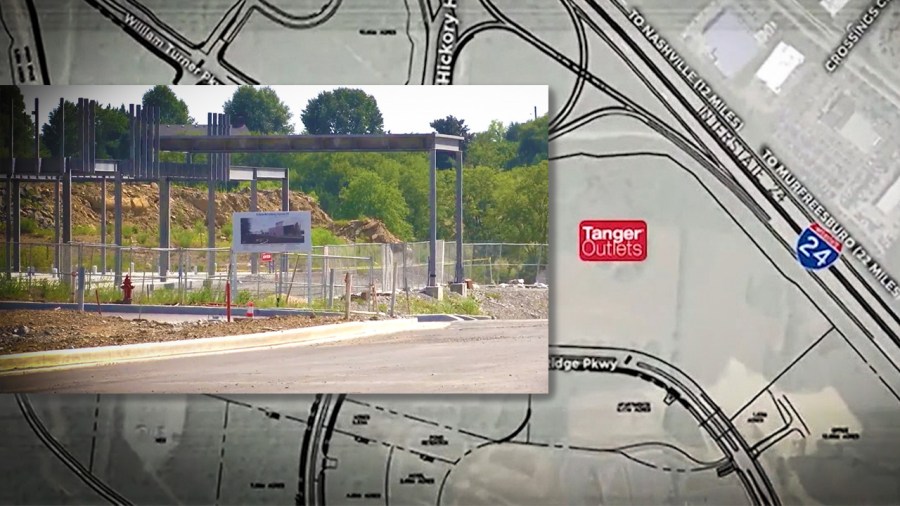 She said the COVID-19 pandemic has brought the project to a halt, but work is now being ramped up again in an area that needs development like this.

“When the recession started in 2008 it was really when all the stores started closing, all the restaurants started closing. Our last retail store was TJ Maxx and now they’re gone, I think it’s been almost two years,” Styles said. “So we actually travel 30 minutes for food and any shopping opportunities. So leaving Tanger open onsite and they’ll have 4 restaurants on site plus 65 stores, I mean, that’s a big win for us. ”


Tanger Outlets Nashville will be part of the Century Farm development on more than 300 acres along Interstate 24 at Hickory Hollow Parkway. The mall will be approximately 280,000 square feet and they are aiming to open in the spring of 2023. The Century Farms mixed-use development includes hundreds of new apartments and a six-story office building for the system. Community Health System.

“We are one of the last areas with room to grow and you have to have the space to build something new and envision a new design,” she said. “So with the existing 330 acres, or for the Century Farm, it’s a perfect fit. And the organization that’s building Century Farms, Oldacre McDonald, they’ve got a lot of experience in building this. They are the people who did Nashville West. And so I can say Century Farms is Nashville West on steroids – more room, more opportunity, so much more variety. ”

“Let’s be clear. We’ve never had a market-priced apartment here in decades. When some of these apartment complexes were first built, they were on the market right then and there. , but definitely not since then,” she said. . So that makes it attractive.”

However, she pointed out that southeast Davidson County is inundated with rental housing.

“For me, I have to say while I’m happy to have a few market-rate apartments, I don’t need more,” she said. “Yes, what I need more than a townhouse, a single family home, I will even buy an apartment. Because at the moment home prices are going up, what we need to do is give homeowners an opportunity to both create an equity period.”

Styles also helped lead the effort to transform Antioch’s former Hickory Hollow Shopping Center. The Metro Nashville government will spend $24 million to purchase rental space at the now-closed Global Mall and purchase an office building east of the center for $20 million. The city said in addition to medical services from Vanderbilt University Medical Center, the city will seek community input on other additions to the development such as childcare or Small business opportunity.

“I think investing in this area, really starting out will be the announcement of Century Farms and knowing that the people who are doing that project are going to have such a huge production going southeast,” Styles said. speak.

She explained that now is a balance in deciding what developments will be approved for her county and one of her priorities is not to do any planning just for the The condominium does not come with retail or restaurant opportunities.

“The apartment complex says we want mixed use (we will bring commercial space and we will bring in restaurants, or coffee shops and shops) that is much more perceptive than those who said we just wanted to build a bunch of apartments,” she said. “When there are no amenities and when there is nothing for the community, well, it is just greed. What I have tried to do, is that I do not do any re-planning for the apartment company if there is land. Unfortunately, there were several projects that I inherited, which were planned for apartments. And I try to work with those individuals and see if they’re willing to sell or if they’re willing to sell to a home builder. And that’s how we maintain the association. Because if everything you have is rental property, you don’t have the people being bought into the community itself. “

The story of The Great Escape festival 2022 – in glorious photos

A Nation Asks: Are We Ferocious Lions or Peaceful Cats?

The Next Pandemic: Anxiety Over Life Itself

‘The Young And The Restless’ Spoilers: Camryn Grimes (Mariah Copeland) Announces That She’s Getting Married In San Diego