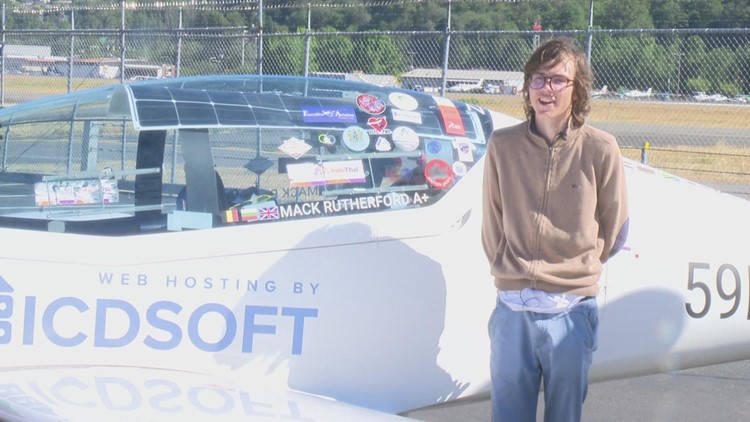 17-year-old Mack Rutherford stopped at the Museum of Flight in Tukwila.

TUKWILA, Wash. – A 17-year-old is trying to break the record for the youngest person to fly solo around the world, and one of his stops was at Seattle’s Museum of Flight over the weekend.

“You can basically go anywhere on an airplane, there’s very little airspace to circumnavigate,” said Mack Rutherford, who arrived at the Museum of Flight Friday afternoon and is staying with a host family in Seattle.

The teenager has gone places some people can only dream of.

“You can actually see the whole country passing you by, so I could see every single part of the world that I’ve traversed from the air, so India, Africa, the US, everything, it’s so special, all of those different places,” Rutherford said.

Rutherford has been a licensed pilot since he was 15. Now Rutherford is trying to become the youngest person to fly solo around the world. He has been flying in an ultralight since March 2022, when he took off from Bulgaria. Since then he has traveled to more than 20 countries. His desire to reach new heights runs in the family.

“So my passion grew, when I was 10 years old I started flying a lot with my dad and that’s really when I started to love flying,” Rutherford said.

Rutherford is making a quick pit stop at the Museum of Flight this weekend. He still has a long way to go and plans to complete his world record journey by next month and return to Bulgaria where it all started.

“It doesn’t matter how young or old you are, just follow your dreams and work towards them and eventually they will come through. It can be difficult at times, but if you keep working at it, they will come true,” Rutherford said.

Interstate 95 crash: At least one dead in wreck on Academy Road exit in Torresdale section of Philadelphia