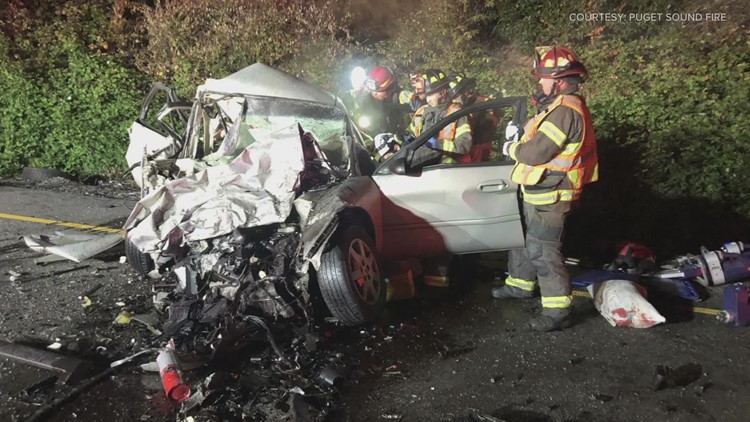 TUKWILA, Wash. — A teenager was killed in a wrong-way collision on Interstate 5 near Tukwila late Thursday night, according to the Washington State Patrol (WSP).

The WSP said a 46-year-old man was traveling the wrong direction north on I-5 at about 11:30 p.m. when the accident occurred. A 19-year-old’s car was hit and burst into flames within minutes, authorities said. The teenager did not survive.

The northbound lanes on the S 188 slip road near Tukwila were closed for several hours during the investigation. All lanes were reopened early Friday morning.

Officials gave no information on the wrong-way driver’s condition or whether charges were pending.

Puget Sound Fire, Tukwila Fire Department, South Kitsap Fire and Rescue and Medic One were at the scene of the fatal crash.

Puget Sound Fire, Tukwila FD, SKFR and Medic One at the scene of a serious vehicle collision NB i5 off S 188 on ramp, all lanes closed. WSP detects, expect long delays. pic.twitter.com/pfZfK6tDV8

https://www.king5.com/article/news/local/19-year-old-killed-wrong-way-accident-i-5-near-tukwila/281-fbf9a5d6-aa1d-4cfb-9fcf-50cbe133cdd6 Teen killed in wrong-way crash along I-5 highway near Tukwila

The Times podcast: Crimes for rhymes?