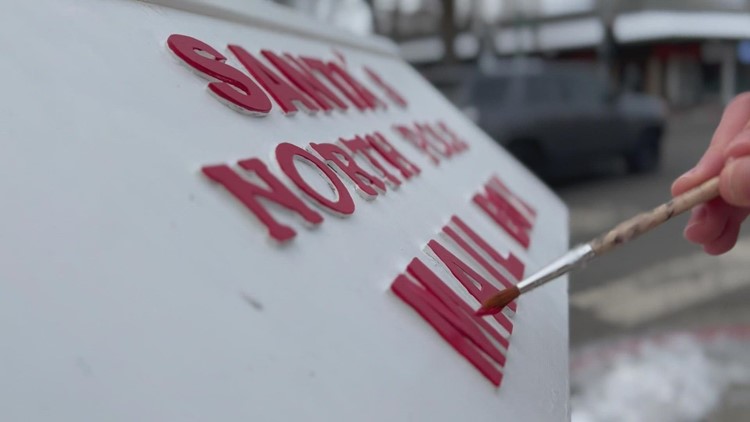 Austin Picinich painted several “Save Our Salmon” murals around the city. Then he was asked to participate in a project to bring joy to the holiday.

KIRKLAND, Wash. — A 17-year-old artist just received a “Giving Back” award from the Kirkland Downtown Association and Amazon for his community contribution.

Austin Picinich first caught the attention of the City of Kirkland when he organized hundreds of volunteers to support his project, called Save Our Salmon Through Art (SOS). He has directed the painting of numerous “Save Our Salmon” murals calling attention to salmon restoration projects in the creeks north of Lake Washington.

The city contacted his services to paint a local staple for the holiday.

Santa’s Arctic mailbox has been a holiday tradition since 2016, and after many harsh winters, the mailbox looks a bit dated.

Picinich said: “The city contacted me so I could give the mailbox a fresh coat of paint and make sure it looked great to all the kids who were sending letters to Santa.

The vintage red and white mailbox was on the corner of Kirkland Avenue and Lake Street for the last month, and Austin says his favorite part is what happens after the kids mail in.

“Kirkland has a wonderful group of elves who volunteer to help Santa and write letters to each child,” says Picinich.

Celestina Hendrickson with the Downtown Kirkland Association said they are a small nonprofit and could not have accomplished holiday miracles like this without volunteers and enthusiasts like Austin.

The elves volunteered to say that Santa reads all the letters first and they help answer them so all the kids know he got theirs. They have written replies to more than 1,000 children this month and will be sending responses to every child on official Arctic letterhead by Christmas.

https://www.king5.com/article/news/local/teen-giving-back-award-kirkland-santas-mailbox-amazon/281-a4ef9838-1bd5-4431-a79d-96eea8cc0004 Teen receives ‘Giving Back’ award from city of Kirkland, Amazon for giving Santa’s mailbox a fresh coat of paint

Most of U.S. faces a 'bomb cyclone.' Why California is spared

Elevator-Pitch Horror Is Here to Stay

Why Is Israel Kowtowing to India Over ‘The Kashmir Files’?

US to send $3.75B in military aid to Ukraine

Are banks closed on Election Day?