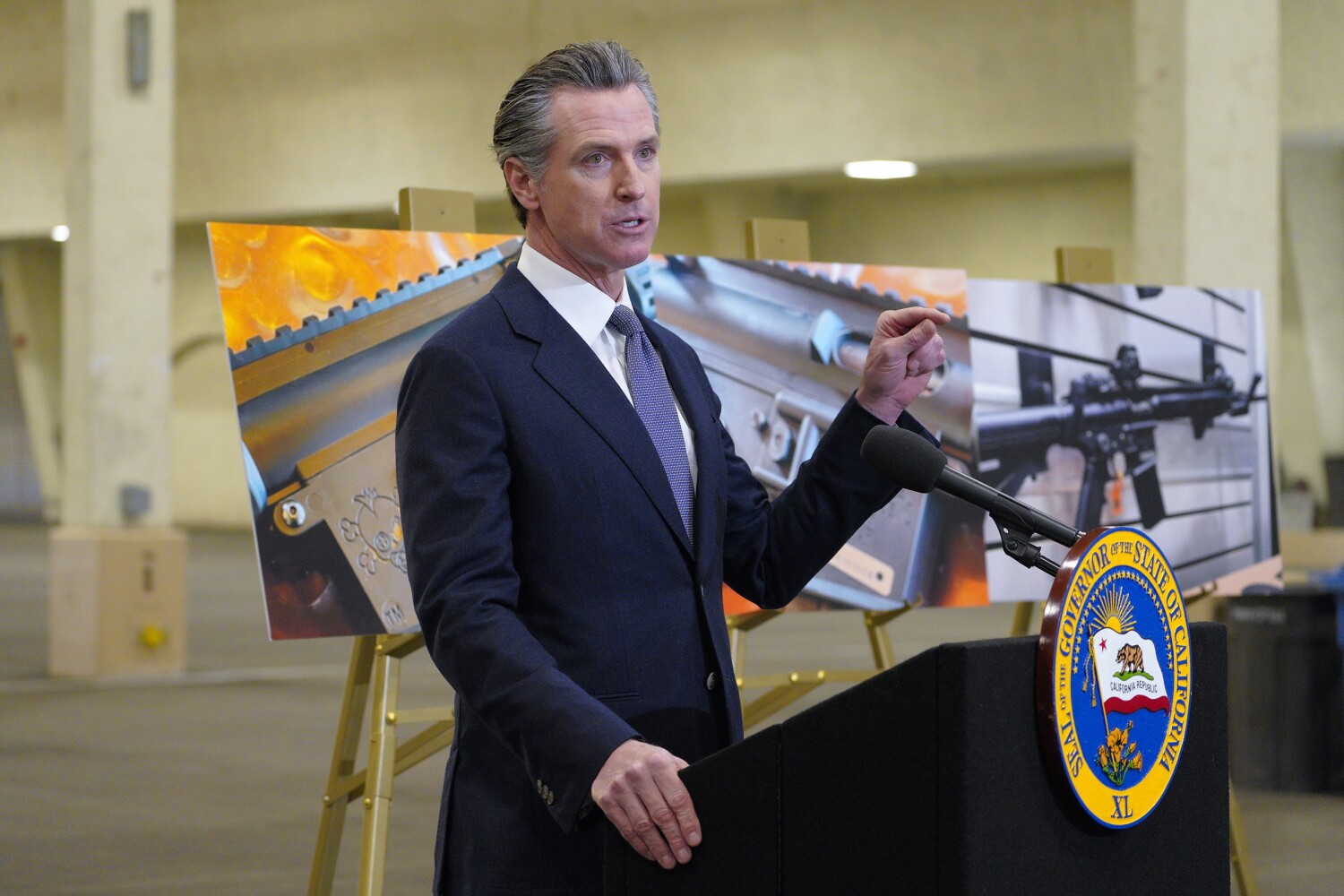 Gov. Gavin Newsom and leading Legislative Democrats on Wednesday vowed to speed up legislation that would require school officials to investigate credible mass shooting threats, allow private individuals to sue gun manufacturers and dealers, and enact more than a dozen other policies aiming to reduce gun violence in California after the violent attack on a Texas school.

“We will control the controllable, the things that we have control over,” Newsom said during an event at the state capitol. “California is leading this national conversation. As California moves, other states move in the same direction.”

State leaders said Tuesday’s shooting of at least 19 children and two adults at an elementary school in Uvalde, Texas, prompted them to look more closely at how California could step up its efforts to combat gun violence. The announcement also gives the governor and heads of state a place in the national gun control debate amid outcry for tighter gun restrictions and growing anger at federal inaction.

“California already has strong laws on background checks, age limits on purchases and restraining orders to prevent gun violence,” said assembly spokesman Anthony Rendon (D-Lakewood). “Yet if there is anything else we can do, we are compelled to do it.”

Newsom’s support for bills currently pending in the legislature — in this case more than a dozen proposals — is rare this early in the legislative process and could pressure Democrats to pass the law. Whether the promise to speed up voting means new gun laws will go into effect sooner than normal remains to be seen.

Most of the laws passed by majority vote this year will go into effect on January 1 or later. For the gun violence legislation to go into effect immediately with Newsom’s signature, it must be supplemented with an emergency clause that requires the support of two-thirds of lawmakers in both the Senate and Assembly.

“I’m confident that some of these bills can get to our desks with the emergency provisions attached so they can go into effect immediately,” Newsom said. “Some may be a more traditional process.”

“First, can you take a moment to grieve with these families and find out what actually happened?” he posted on Twitter. “We need to address these issues head-on. Stop the political posturing and let’s come together to address the root causes of this violence.”

Gallagher pushed back on the need for further gun restrictions, arguing that California gun laws had failed to prevent mass shootings in the state.

The Texas shooting comes after a recent spate of mass killings in California.

A gunman attacked attendees at a lunchtime banquet at a Taiwanese church in Laguna Woods on May 15, killing one and injuring five. This shooting came just weeks after a shooting in Sacramento that killed six people and injured a dozen just blocks from the Capitol.

California has dozens of laws that limit who can buy a gun, when, and what types of background checks are required for purchases. This year’s proposals aim to empower individuals, school officials and local governments by holding the arms industry accountable to victims of mass shootings.

The most sweeping measure, Senate Bill 1327, would allow private individuals to sue gun manufacturers or dealers and anyone who imports or sells assault weapons, .50 BMG rifles, and ghost weapons. The bill is modeled after a Texas law that would ban most abortions after six weeks and authorize citizen-led civil lawsuits against providers and clinics.

The bill passed the Senate by a 24-10 vote on Tuesday and will now go to the Assembly. It was prompted by Newsom, who in December urged state lawmakers to use the US Supreme Court’s refusal to block Texas’ abortion law as impetus to draft a similar bill in California that would target the gun industry.

Another prominent measure on the list of expedited actions is Senate Bill 906, which would require school officials to investigate any threat of mass shooting and report the potential violence to law enforcement. The investigation could include searching a student’s property, e.g. B. a book bag, a car or a school locker.

State Senator Anthony Portantino (D-La Cañada Flintridge) said his goal is to add an urgency clause to his bill so it goes into effect early with Newsom’s signature. Newsom and lawmakers said they plan to finalize as many of the bills as possible before they go on summer recess on July 1.

“With an event like today and the tragedies of the last two weeks, we are more than urgent,” said Portantino. “Under pressure from the governor and my colleagues, we will do everything we can to implement these legislative changes as quickly as possible.”

Other proposals include a bill to restrict gun advertising to minors and another that would further crack down on ghost guns in California. prosecutor. Gen. Rob Bonta is sponsoring another high-profile bill that would authorize the California Department of Justice, local governments and gun violence survivors to sue gun manufacturers, importers and dealers if they are “irresponsible, reckless and negligent in the sale or marketing of guns their products into.” California,” according to an analysis of the proposal, Assembly Bill 1594.

“Another shooting,” Newsom tweeted. “And the GOP won’t do anything about it. Who the hell are we if we can’t protect our children? This is avoidable. Our inaction is a choice. We now need nationwide, comprehensive and sensible gun protection.”

Newsom hit back at Texas Gov. Gregg Abbott on Wednesday, who said earlier in the day gun laws in places like New York, Chicago and California are ineffective and don’t provide real solutions to gun violence.

“I didn’t even want to bring it up, but Governor Abbott just checked the name of the state of California,” Newsom said. “I would warn him not to do that.”

Newsom pointed to 2020 data from the Centers for Disease Control and Prevention showing that California had a lower firearm death rate and fewer firearm-related deaths than Texas. “So many of us who feel deep fear and anxiety, I hope you look to the state for leadership, for demonstrable leadership,” Newsom said.

“We are determined in this fight. We will not give up. We do not give in to cynicism. We’re going to turn that around.”

United Farm Workers members march again to the Capitol, where their clout is growing