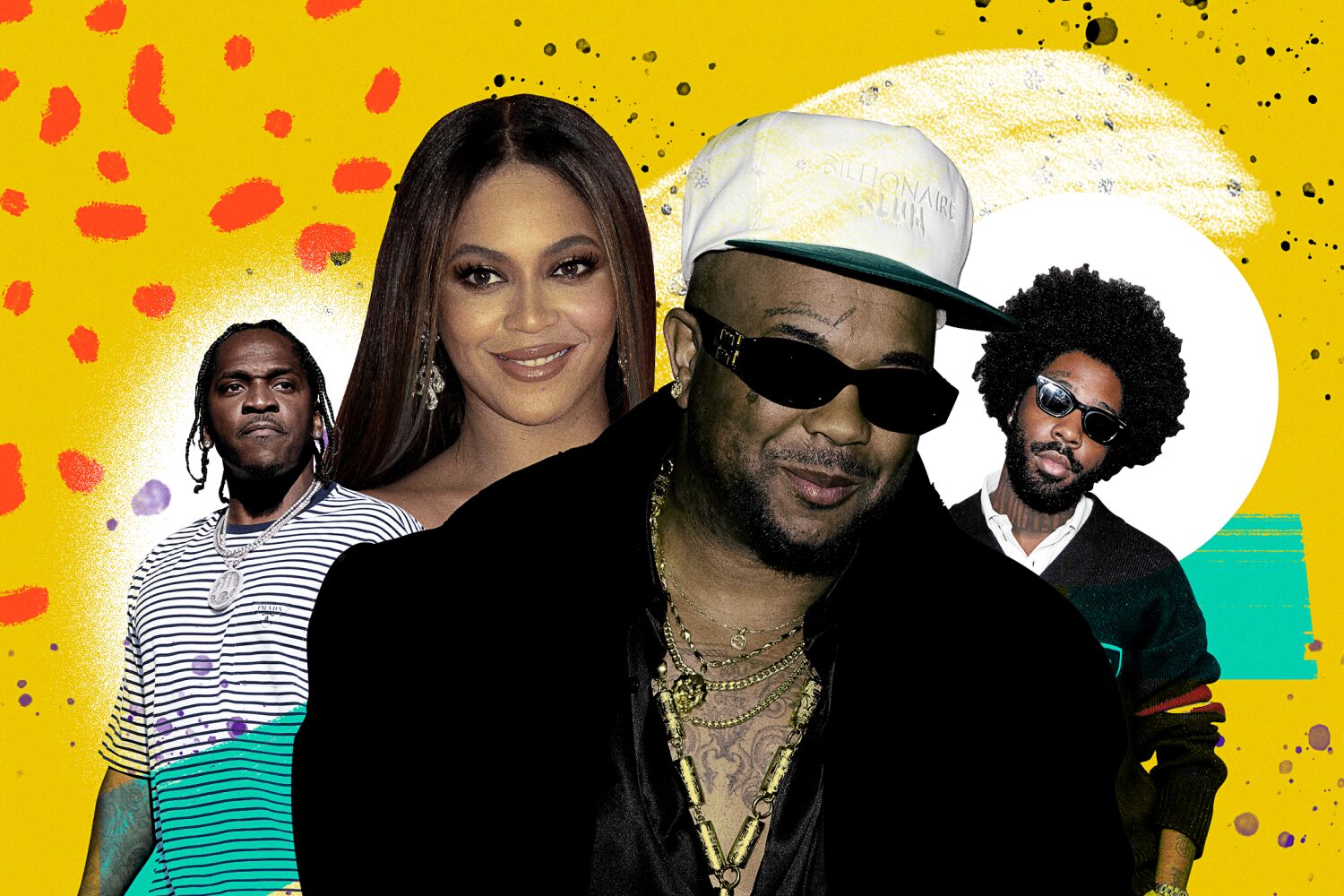 On a September night in Manhattan, The-Dream, one of America’s biggest hitmakers, was at the Plaza Hotel. Also on the plaza: apparently all the diplomats and dignitaries in the world. The UN General Assembly was meeting right next door. Stone-faced men in suits and badges on their belts milled about. Security forces fought each other to stuff their respective national VIPs into elevators.

Rihanna’s “Umbrella,” Justin Bieber’s “Baby,” Beyoncé’s “Single Ladies (Put a Ring on It)” — the 45-year-old songwriter-producer has written or co-written touchstone after touchstone. Most recently, he worked extensively on Beyonce’s latest blockbuster, Renaissance, and the work paid off: On Tuesday, The-Dream was nominated for six Grammy Awards, including Album of the Year for Renaissance, Song and Record of the Year for Beyoncé’s Break My Soul” and Songwriter of the Year, non-classical. For now, though, The-Dream was stuck with all the other regular non-UN folks waiting for an elevator.

The-Dream grew up in Atlanta, where he still lives with his family. (He and his wife, Lalonne Martinez, have four children; he is a father to nine.) He first came to New York as a fifth grader to play the trumpet with his school marching band in the Macy’s Day Parade. (They called him Terius Nash at the time.) He fondly remembers his band leader, Mr. Styles, and their renditions of Gap Band and James Brown staples. He also recalls that Mr. Styles turned down his request to play Lionel Richie: “You don’t play anything that says all night!” Later, with his notoriously awesome solo work, The-Dream was less self-conscious.

He was raised in the Baptist church, which meant “everyone in the family sang. if you at all went to church, you were in the choir.” His grandfather’s house had an old, broken piano that he liked to play with after school. The first time music broke his heart, he says, was when his grandfather sold it. But he never considered himself particularly creative. “It was just me being me,” he says. Another childhood dream was to design cars for Cadillac.

When he was 15, his mother died of cancer and his beloved grandfather, a strict cement mason, became his main carer. Whatever the task—from roasting peanuts for his grandfather’s pinochle friends to building a tool shed from scratch—it had to be done right. The implanted lessons: “We come from black people This Place. We don’t have time to play around. Whatever your life is, it is what you work for.”

When he was 19, his grandfather died of a stroke. An inheritance dispute with his step-grandmother resulted in his grandfather’s house, which had been in the family for generations, being sold to split the profits. Just as he was making his first foray into the industry writing songwriting sessions for local talent, Nash had $15,000 in inheritance funds and almost nothing else. His colleagues and associates “still had grandfathers and mothers and homes,” he recalls, he thought as he now had to claw and claw his way out of his grief.

He worked during the day — at amusement parks, at steakhouses, at daycares — and worked on recording sessions all night. “That’s how I learned not to sleep,” he says. “Which isn’t so good now because I can never turn off my brain.” It was $200 a session here, $400 there, all in cash. “I knew I was funny, I knew melodies, I knew how to make sense,” he says. “I didn’t know it was called top-line writing.” But he quickly heard, “Hey, write a hook! You are the hook master!’ I think, OK, I guess I’m the hook master.”

While his friends partied righteously in their 20s, he resisted temptation. “Everyone was in the club, told me what I was missing, showed me pictures. And the pictures weren’t that good back then, so you get the idea, it’s a lot better than what it was.” He recalls telling his friends he wasn’t going to smoke weed until he made a million dollars and he remembers his best friend saying, “Well, I guess you’ll never smoke.” (He happened to have to wait until 30 p.m.)

As a solo artist, his skillful pastiche, clever twists and turns, and unique use of spaces have created a cult following. His first three albums, released between 2007 and 2010 – Love/Hate, Love vs. Money and Love King – were small radio hits. For die-hard R&B fans, however, they’re stone-cold classics. As a producer and songwriter (often collaborating with longtime creative partner Tricky Stewart), his achievements just keep going. These include Kanye West’s “All of the Lights”, Kanye and Jay-Z’s “No Church in the Wild”, Jay-Z’s “Holy Grail”, Ciara’s “Ride”, Britney Spears and Madonna’s “Me Against the Music” and many more Songs for Beyoncé and Rihanna and Mariah Carey, and at least a single for Kim Kardashian.

“Renaissance” is a different achievement: a piece of music gigantic in its carefully crafted density. It already feels timeless. “Most of the writing didn’t take place in a fancy place” – he gestures dismissively at the colorful petit fours and bottle of brut on the table in front of him. While the recording HQ was a house in the Hamptons, The-Dream stationed in a trailer out front. He wanted to be forced to feel hungry. “I have to write like I’m trying to get out of here,” he says. It was that feeling that led to lines like “Now I just fell in love / And I just quit my job” on “Break My Soul.” “Now everyone’s like, ‘Oh my god, that’s crazy, where did that come from?’ It came from us in the dark afterwards.”

During the creative process, The-Dream says, “I’m not scared at all. I welcome everything – I want all the smoke. Bey isn’t afraid either. That’s my virgin sister.” Together they stick their heads together and overcome songwriting blocks. “I can try a thousand times,” he says. “I have no ego. All she can do is make me write a role better, make me play a role better.”

While The-Dream was one of her key co-writers, “Renaissance” was created from a whirling pool of talent orchestrated by Beyoncé. Everyone from Skrillex to Grace Jones has credits. “We could have made it easy to grab money and spend all the time with just her and me writing the whole thing,” says The-Dream. But Beyoncé wanted a collaborative effort. “We haven’t even talked about it that much, but in our minds the world was in a room. What better place to gather than here on Beyoncé’s album?”

The critically acclaimed ballad “1+1” from Beyoncé’s 2011 album “4” was written “one hundred percent” by The-Dream “in Vegas, chilled by myself.” I’m not trying to be funny, but it’s actually not that difficult. To make something coherent with so many moving parts, as was the case in the “Renaissance” sessions – “it’s not easy! Watching her put these things together is the part nobody knows about Bey and producing. She says, ‘No, drop the key on it’, ‘No, slow it down.’ Those magical things she does that no one sees. It’s not like she’s going on tour and she’s going to show you that on stage. They are two different people.”

Throughout his decades of writing commissions, The-Dream says, “I’ve seen them all. I know all artists and the things they do. There are certain artists who hear a song and don’t even start singing it. The best thing about Bey – she will try. If it doesn’t work, it just means you have the biggest star alive who isn’t afraid to try. You rarely see anything like that. Only the greatest can do that! Which for me is the craziest thing.”

Looking at the end product, The-Dream says: “It might sound blasphemous and I hate to say that because there are so many people who have written for her and alongside her on other albums I’ve been on, but ‘ – He pauses for a long time – ‘this is probably their best record. There is no way around it for me. This is one of them ones. And how gracefully she handles letting it live without videos. You know she has them. They are beautiful. They will come. But it’s enlightening, and it should be for everyone – there’s a consensus in our clique, let it breathe. Let it smoke for a second. let this wine breathe Fear? Obviously not. Listen. listen and cry!”

In the middle of the chat he breaks out in convulsions. It takes a moment before it becomes clear what is happening. He emits metal-crushing noises with his mouth while frantically playing the air guitar. It’s – it’s Marty McFly, from the rock scene in Back to the Future.” “‘It sounds a bit crazy now, but your kids will love it.’ I think about that all the time.”

The-Dream occupies a unique place in pop culture. He’s not well-known enough to be raved about in public, but he’s influential enough to have the ears of A-listers. (He says he got all his famous buddies to join Kevin Costner’s neo-western Yellowstone. “Jay hit me like, ‘Hey, what’s that thing?'”)

“I have songs that would mean hiding,” he boasts. “I to have these records. My kids will salivate after I pass out. ‘Is he dead? Oh we love daddy but he’s gone let’s get the pop records out.’ But you won’t get these songs from me ’cause it’s too soon. I need a cartoon to sing this. I need a movie for that. No one needs to understand the s I’m talking about. Do I want them to understand? That means I have to wait a second.”

Like many of his peers, The-Dream feels some of his best work has been overlooked by the Recording Academy. That doesn’t mean he has concluded that many others have concluded that the Grammys are not, and never will be, an accurate arbiter of quality or taste.

“For me, accuracy is the wrong approach,” he says. One of the five Grammys he’s won was a Song of the Year statuette for “Single Ladies.” “You realize the song can’t be good enough,” he says. “It must be amazing! It has to be culturally moving. “Have you seen Tom Hanks do the Single Ladies dance?!!” That means I’m waking up to a thousand already.”

He says he has to write songs that are big enough so you can’t miss them. Which, as he has mentioned once or twice, is actually quite easy for him.

“They don’t make music on this planet that I couldn’t make in a very high quality,” he says. “It does not exist. I have found the exact reason I am on earth. I’m like a mustang in the wild. Just walk. It’s gonna be a nice day. how should i know Because I have legs and see nothing but fields. Let’s go. Nothing will stop me.”

Madonna’s new Celebration tour is coming to LA in September