With buckets of gore, violence, and general frenzy, The Boys is certainly no ordinary superhero series. The Amazon Prime show explores a world where superheroes live among us: but they don’t have secret identities, nor are they as classy as The Avengers or Superman.

Instead, The Seven, an elite group of superheroes led by the demented narcissistic Homelander, are heavily marketed and owned by seedy company Vought International. With the “Supers” within The Seven, as well as those outside of it, engaging in corruption, intrigue and self-serving agendas, they are far from heroes and definitely not noble.

As the showrunner of Supernatural, which ended in 2020 after 15 seasons, Eric Kripke is no stranger to writing complex characters. But with The Boys, he takes that to another level, as the politically charged TV series is both a comedy and drama series with elements of fantasy, sci-fi, horror and everything in between. During a panel discussion with The Digital Fix and other members of the UK press, he answered a number of burning questions people had about Season 3 of The Boys. What follows is the transcript of that panel, which includes questions posed by representatives from various other outlets.

So can you tell us a little bit about what kind of deeper themes we’re going to see in season three? What is striking?

Eric Kripke: Yes, for me the big meta-topic becomes this meditation on toxic masculinity. And that’s where the tone falls across many of the stories. It’s about Butcher’s relationship with Ryan and it’s about Homelander having to be so strong all the time.

I was always struck by that moment, after Trump got Covid-19, his first step was to take off a mask, like on the White House balcony. What a piece of shit. Why is it more important to you to present vitality than compassion? What’s wrong with you that you have to do this?

And then Soldier Boy’s specific lens was that John Wayne Marlboro Man, cowboy bullshit. That was always a myth and never real, it was something that had started in the States. And it’s kind of poisoned generation after generation of men.

It’s one of the reasons we find ourselves in a world where Trump is elected president and Putin invades Ukraine because they are all confronted with how empty and insecure they are inside. 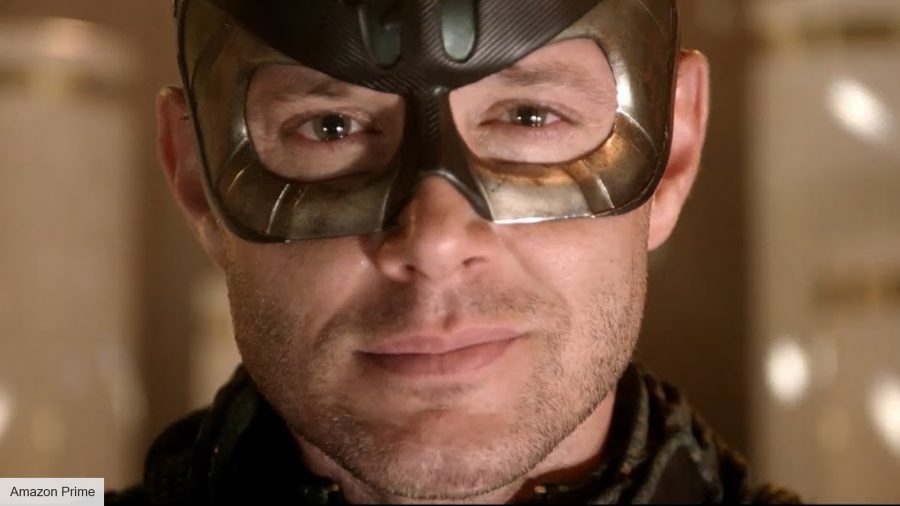 Why do you think it’s important in a show like The Boys to cover real issues like Black Lives Matter, the rise of the far right and fascism?

EC: When I got the job, I had dinner with Garth Ennis, who wrote the comic. And I asked him, ‘What inspired you to do this?’ And he said: “I was interested in what would happen if you combined the worst of politics with the worst of celebrity”. And he wrote it in 2006.

As early as 2016 we were so sure that Hillary Clinton would be elected. And even then, with Trump in the running, I was like, ‘What a crazy idea.’ And then the world suddenly became his world.

And so you get to a point where you’re like, “How do we do this? Not talk about it?’ because we are so uniquely positioned with our superhero metaphor to tell this story in a way that few other shows on television can. And when they do, they’ll probably be dead serious because it’s so simple, but we have this perfect little metaphor for the very second we’re living in.

They introduced a new character, Soldier Boy, apparently played by Jensen Ackles. Was that a simple casting decision?

EC: Unsurprisingly, it was unexpected. Originally we chose an older actor: John Wayne was the reference. But we didn’t find anyone. And I happened to be talking to Jensen that day.

I told him I had a hard time getting the role. And then I thought, ‘Wait a minute, do you want to do that?’ And he says, ‘Yes, send me the script.’ I sent him the script and then he had to fight for it and audition for all the other executives because there’s a lot of people that work on the show that haven’t worked with him in over a decade. So he had to fight for it and get it.

Crank up this soldier boy: The best war films

But in hindsight it was obvious because there are so many different colors that Soldier Boy must be. He has to be charming, he has to be emotional, he has to be really scary.

After working with Jensen for so long, I never blamed him for anything he couldn’t do. And really, it’s its versatility that I really wanted and needed here. That’s almost how it should be.

How did Ackles approach this character who is the polar opposite of Dean Winchester, the character he has played for over twenty years?

EC: Yes, he was excited. Because he’s been playing Dean Winchester for so long, he was really hungry for an opportunity to do something different and show himself What he could do it differently. And we tackled that with everything from his hair to his attitude – we discussed it all very consciously.

I think he’s taking it off. People will be surprised. When I look at this season, I don’t say to myself, “Oh, there’s Jensen Ackles” or “There’s Dean Winchester.” He feels like Soldier Boy to me, he embodies the character in a way that a good actor does. So it’s exciting.

Can you tell us a bit about how you brought Herogasm to the big screen? And does it feel a bit like pushing boundaries?

EC: Right from the start, when I first got this job — especially when people who knew the comic heard I got the job — the first thing they invariably said to me was, ‘I challenge you to do it here.’ I don’t like to withdraw.

I think we waited so long because, honestly, after a couple of successful years, we needed Amazon’s goodwill. I liken it to a parent finally giving me the cookie. There’s a lot like, ‘Okay, we knew sooner or later we had to give you this cookie, and here’s the cookie.’

But, yeah, it’s about bananas, this whole episode. But again, what always brings me the most joy isn’t that madness, it’s being able to put an emotional scene in the middle of that madness. This is the stuff I find subversive because it’s easy to throw dicks at a screen. But if so, I can get you to take care of the characters at the center of it all. That’s the fun for me.

We know the college spin-off will cover Godolkin University, a satire of X-Men in the comics. Can we expect other major Marvel or DC analogues to show up in Season 3?

EC: In The Boys we have an Ant-Man character and Soldier Boy is obviously a reference to Captain America. So yes, we’re always looking for more. When we’re trying to find heroes, we always try to say, “What are the archetypal heroes that we haven’t made yet?” What we haven’t figured out yet is Batman.

So Batman remains a character that we have yet to address. And we should, because he is basically a capitalist nightmare who only oppresses the lower classes of criminals to increase his family’s wealth.

They spoke of power and superpowers as a metaphor for fame and fame. I find it fascinating how that’s used on the show, especially this season. You don’t have to give a clear opinion on this. But with the output of Johnny Depp and Amber Heard, do you think this season’s themes will resonate in that regard?

EC: Overall, yes, I think there is a metaphor of political power. And then the show is also about the metaphor of celebrity. And it’s interesting because a lot of the backstory on this comes from Seth Rogen, who’s a real celebrity and is friends with a lot of celebrities, and he’s very honest and open about what it’s like.

It’s enabling more than anything, it’s just being surrounded by a universe of people who are there to fulfill your every whim and cover up every mistake. And I imagine for a guy like Johnny Depp to have several decades of it, it sure must affect your worldview.

What do you think makes The Boys different from other superhero shows?

EC: We’re definitely trying to do the opposite of what every other superhero series or movie is trying to do in many ways. We want to create a world that is as realistic and honest as possible, in which there are also superheroes. And so even characters have sex and go to the toilet.

We’re not trying so much to be a parody as just a deconstruction of if you were to take people with these types of powers and put them on planet earth, what a complete and totally shitty show that would be. And so it kind of comes naturally.

And then I’d say we’re trying to be character-driven, uniquely for this superhero genre. Movies don’t usually stop to focus because they’re movies and you’re moving so fast.

Still, they don’t stop focusing on the inner emotional life and complexity of the character. And like I said at the beginning, anyone who watches the show knows they’re going to experience insanity and extreme violence, so the best way we can really surprise them is to get them interested in the characters.

Season 3 episodes of The Boys will begin streaming on Amazon Prime Video on June 3rd.

China and the U.S. Are Arranging an In-Person Meeting Between Heads of Defense

The best Game of Thrones characters – from Tyrion to Tormund

Are Victoria, Greg Still Together? ‘Bachelor in Paradise’ 2022, Where Are They Now