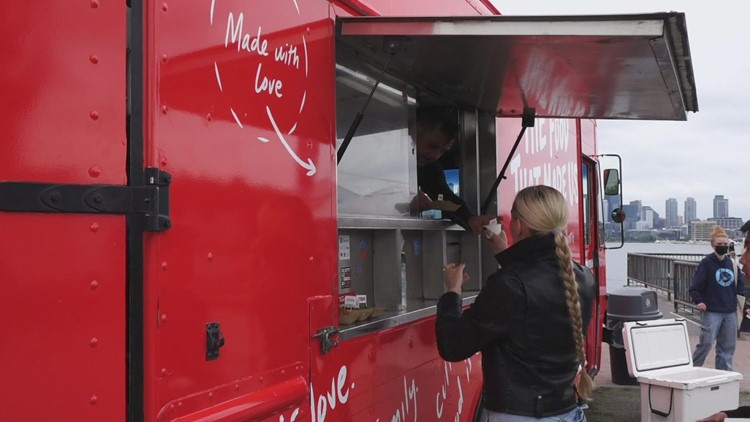 The Food That Made Us tour will stop at Hing Hay Park on Saturday.

SEATTLE — The I Stand With Immigrants initiative celebrates its ninth annual tour this weekend with a stop in Seattle.

As part of The Food That Made Us tour, the initiative has teamed up with famous chefs – including Joanne Chang, Tom Colicchio, Byron Gomez, Christine Ha and Hawa Hassan – to create original recipes for some of their favorite dishes, inspired by their own inspired immigrant heritage.

The five-city US tour also includes local immigrant food trucks like Seattle’s Thai-U-Up, which serves spring rolls from a truck driven by a couple.

Daniel Leon-Lewis, the initiative’s creative director, said his team is thrilled to be back on the road after a few years of hiatus during the pandemic.

“We honor the creativity, cultural expression and community-building power of food through the Food That Made Us Tour,” said Leon-Lewis.

Zaira Garcia said being on the road again and meeting immigrants and their families is a powerful perspective.

“We’re approaching a decade of hosting this, and we’re really out here to celebrate the many contributions that immigrants are making to our country,” Garcia said. “Whether it’s through culture, through food, through music, you can really look in so many directions to see the value of immigrants and immigration to the United States.”

The Food That Made Us Tour will be held Saturday in Seattle’s Chinatown-International District and at Hing Hay Park, 423 Maynard Ave. S, serving free food, I stand with immigrants shirts and tote bags. The event will take place from noon to 6 p.m

https://www.king5.com/article/news/local/seattle/immigrant-food-truck-tour-international-district/281-845ad34b-7e98-4c48-8edd-6b45bbbca288 The Food That Made Us immigrant food truck tour comes to Seattle

The crypto crime wave is real and it's gotten worse.

Quadriplegic outdoorsman makes hunting and fishing more accessible for everyone

Deputies’ pursuit of underage driver ends in fatality in L.A.