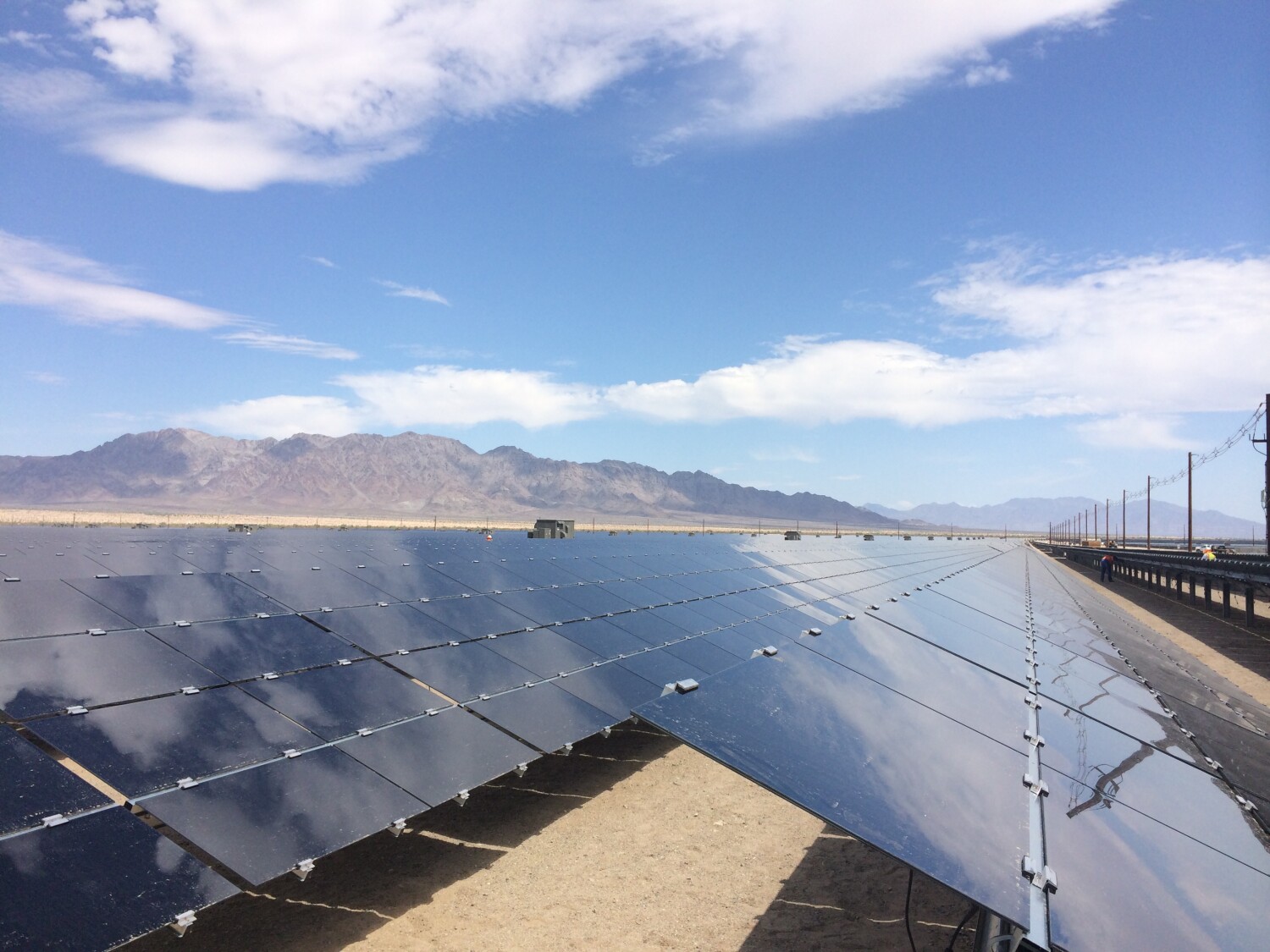 The anti-inflation bill is headed to President Biden’s desk.

The House of Representatives approved the bill, a stripped-down version of the original “Build Back Better” legislation, on Friday afternoon, with all 220 Democrats voting in favor and 207 Republicans voting against.

Now that the roughly $700 billion package is set to become law, what will it mean for you? Here’s a look at how the bill’s provisions could affect Californians.

California will benefit most from several of the bill’s health regulations because it has the largest number of potential beneficiaries.

For starters, the bill would continue to receive the additional premium subsidy for Affordable Care Act insurance policies for three years that the American bailout plan was inaugurated last year. These subsidies — which totaled $1.7 billion a year for California alone — dramatically reduced premiums for more than 1 million Californians, including middle-income consumers who were previously ineligible for the subsidy. Under the law, no one who buys an Obamacare plan would have to pay more than 8.5% of their income in premiums.

Now that aid is being extended and the state is contributing its own subsidy dollars, many Californians may face even fewer barriers to receiving health care. Anthony Wright, executive director of the Health Access California advocacy group, said Covered California could potentially offer low- and middle-income consumers a comprehensive, mid-range no-deductible policy that could potentially save them hundreds to thousands of dollars.

“So we’re going from the worst of times (doubling premiums) to the best of times (capped premiums and reduced co-payments, including in many cases the elimination of deductibles). That adds real affordability to California consumers,” Wright said in an email.

California also has more Medicare beneficiaries — 6.6 million in July — than any other state, so changes in that program will have the greatest impact in that state. These changes will help lower drug costs for seniors, limit increases in Medicare Part D premiums, and provide more help to lower-income Americans.

Specifically, the law will benefit Medicare registrants by:

Capping the price of insulin at $35 per month. Insulin prices have skyrocketed, rising more than four times faster than inflation from 2000 to 2018 before flattening out during the pandemic. Almost half of US states already have some kind of cap, but California, which has the nation’s largest population of people with diabetes (about 3.2 million), doesn’t.

Set an annual limit of $2,000 on out-of-pocket payments for prescription drugs for Medicare Part D participants, beginning in 2025. According to the Kaiser Family Foundation, nearly 115,000 Californians in Medicare Part D spent more than $2,000 out of pocket on medications in 2020.

Provision of vaccines at no cost. Previously, some adult vaccines (such as shingles) required a Medicare co-payment. The change could save money for more than 460,000 Californians, the Kaiser Family Foundation estimated.

limit premium increases in Medicare Part D to 6% per year from 2024 to 2029. The law also reverses a Trump administration rule that was expected to increase Part D premiums by changing the way insurers pay Negotiate discounts with drug manufacturers.

Make more people on lower incomes eligible for Medicare Part D with deep discounts beginning in 2024. The law makes everyone earning up to 150% of the federal poverty line eligible for reduced premiums and drug prices; the current limit is 135%. That could help more than 24,000 Californians, KFF estimates.

In a broader sense, the law requires Medicare to do so negotiate lower drug prices every year from 2026 to 2029 for 10 to 20 of the most expensive drugs that have no effective competition. Although the direct result would be savings for Medicare and its beneficiaries, if private insurers use Medicare prices as a yardstick for their negotiations with drugmakers, the lower prices for these drugs could be reflected in the marketplace.

It also requires drug manufacturers Pay rebates to Medicare if they increase the price of drugs prescribed by Part B (typically chemotherapy drugs and other drugs administered in a doctor’s office) by more than the rate of inflation, beginning in 2023. This change is expected to save the government more than $100 billion, but it’s not clear what impact this would have on Medicare beneficiaries and other American consumers.

The White House says the bill will reduce energy costs and greenhouse gas emissions. The nonprofit think tank Resources for the Future estimates that the Inflation Reduction Act will save families about $170 to $220 annually and that the act will reduce fluctuations in electricity prices. But how?

Broadly speaking, it’s a lot of tax credits, rebates, and other financial incentives for both the people who make things like electric cars, rooftop solar panels, and wind turbines, and the people who buy them. In the long term, reducing the costs to get more people to use renewable energy technologies to power their homes and commutes is expected to reduce both greenhouse gas emissions and your bills. When the electricity comes from renewable resources like solar and wind used in plants in the US, something like a war on another continent is less likely to cause energy or gas prices to skyrocket.

In other words, many of these things won’t directly lower your bills any time soon. But many are likely to deliver long-term cost savings on energy bills and transportation, and have a positive impact on combating climate change.

An analysis of the Senate Democrats’ bill says the bill will help the United States cut greenhouse gas emissions by about 40% by 2030. It’s difficult to estimate exactly how much your household could save by continuing to live on this planet, but moving to a biodome or Mars sounds expensive.

Some of the highlights:

Tax incentives for buying electric or hybrid cars. The bill provides tax credits of up to $7,500 for new electric and hybrid cars and up to $4,000 for used cars. To be eligible, the buyer, vehicle and seller must meet certain requirements, such as: B. the income of the buyer, the price of the car and the origin of the materials used to manufacture the vehicle.

Home energy rebate programs, grants and tax credits. Making your home more energy efficient and less dependent on non-renewable energy sources should cost less after this law goes into effect. Replacing your old water heater, heat pump, or HVAC system, or adding solar panels could entitle you to some money in the form of rebates or tax credits.

More money to manufacture clean energy components and generate nuclear and renewable energy. There will be new, expanded, or prolonged tax credits and additional sources of funding for things like manufacturing wind turbines and solar panels, and generating electricity from nuclear and renewable sources. (The Bipartisan Policy Center has a more detailed analysis of these programs.)

infrastructure investments. The bill provides funding for investments in low-carbon building materials for federal projects and infrastructure for the Department of Energy’s national laboratories. There are also funds for forest management and forest fire risk reduction.

There are no California tax provisions in the Inflation Reduction Act, but some of the increases would hit the state’s tech giants hard.

The most significant is a new 15% minimum tax on companies that have reported at least $1 billion in earnings over the past three years. According to the Institute for Taxation and Economic Policy, the provision targets a relatively small number of large corporations that paid far less than the typical U.S. corporation, such as the 55 that didn’t pay corporate income tax in 2020.

However, the actual impact of the tax will depend in part on how companies respond to the new rules. The Tax Foundation, a right-wing think tank that has criticized the tax, said the real estate and logistics industries — both major players in California — could see some of the biggest tax hikes.

Another new tax soon to be felt by California corporations is a 1% excise tax on share buybackswhich rose sharply after President Trump signed the Tax Cuts and Jobs Act in 2017. California-based tech companies like Apple, Alphabet (the parent company of Google and YouTube), Meta (Facebook), and Oracle have spent hundreds of billions of dollars buying back shares over the past few years in a bid to boost stock prices.

One provision that Republicans have repeatedly cited is one $80 billion increase in IRS budget, which could help close the gap between what taxpayers owe and what they actually pay. In response to the GOP criticism, Treasury Secretary Janet Yellen released a letter to IRS Commissioner Charles P. Rettig, directing that none of the new resources or settings should be used to increase the chances that small businesses or households with an income of less than USD 400,000.

https://www.latimes.com/california/story/2022-08-12/the-inflation-reduction-act-is-about-to-become-law-what-it-will-do-for-californians The Inflation Reduction Act is about to become law. What it will do for Californians

Insulin cap of $35 would only impact Medicare recipients

What Rights Do Hasidic Schools Have?