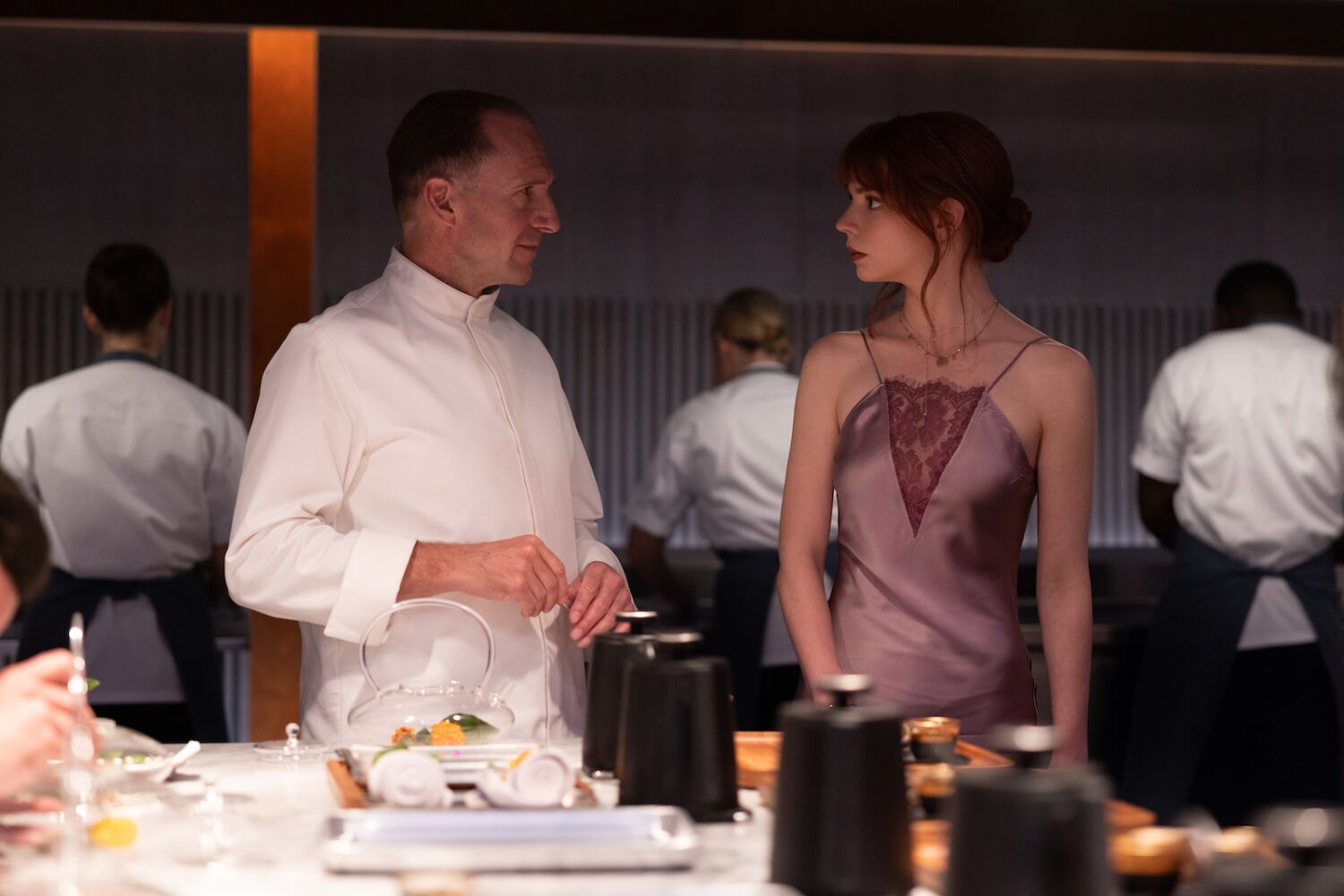 A philosophical deconstruction of artists and their enablers, an elite, ragtag crew gathers for a very special dinner in the deliciously dark thriller-satire The Menu. Written by The Onion veterans Seth Reiss and Will Tracy and directed by Mark Mylod, who made his name in acclaimed TV franchises like Game of Thrones and Succession, The Menu is a tightly coiled, sharply rendered skewer of dichotomy between the takers and the givers, or in this case the eaters and the cooks.

The recipe for The Menu is a fillet of bloody class warfare à la Ready or Not, a pinch of Midsommar-style cult-folk horror, a puree of Chef’s Table dusted with a sprinkling of Pig and sprinkled with an essence of “Clue”. We’re taken on this ride through a classic Final Girl’s point of view, the spunky, sarcastic and smartass Margot (Anya Taylor-Joy), a late addition to the guest list who is an unexpected and unpredictable element in the sauce.

The restaurant is called Hawthorne and is located on a remote coastal island in the Pacific Northwest; the chef is Julian Slowik (Ralph Fiennes). Guests include a food critic (Janet McTeer) and her editor (Paul Adelstein), a group of financiers (Rob Yang, Arturo Castro and Mark St. Cyr), a die-hard fan (Nicholas Hoult), a movie star (John Leguizamo) and his assistant (Aimee Carrero) and two regulars (Reed Birney and Judith Light). The group submits to the culinary experience they will have in the hands of Chef Slowik, his iconic sous chef, and his stern host Elsa (Hong Chau).

It all feels painfully pretentious at first as diners are served dishes like The Island (a scallop on a rock) and the Unaccompanied Accompaniments that take deconstruction to a whole new level. Then the menu for chef Slowik becomes a trip down memory lane that takes a turn towards the uncomfortably personal, then accusatory, shocking, aggressive and violent.

The central metaphor is obvious. “The Menu” is not about food or eating, but about the consumption of art and the forces the artist is subjected to while attempting to create. Chef Slowik has sold his soul for success, submitting to the whims of the big money investors, the critics, the celebrities, his mindless consumers and, worst of all, his fanboys who think they know more than the experts and are willing to chime in too (the fanboys have it the worst here). That’s not to say Chef Slowik is a victim. No, he’s the antagonist here, but Fiennes plays him as a tormented soul who’s trying – fiercely – to face her own sellout, and taking no pleasure in doing so.

Reiss and Tracy have tapped into the increasingly pretentious and over-the-top world of high-end dining experiences to write a screenplay that feels like something of an exorcism; a cathartic primal scream about the state of the arts industry, be it film, television, literature, visual arts or food. The artist, despite his or her inclinations or inspirations, is always indebted to the critics, the investors, and the fans, and The Menu is both a fierce rejection of that paradigm and a black humored acceptance of it all.

Mylod has taken that script, a wordy writer’s existential crisis, and come up with a slick, somewhat cold proposition. The acting is flawless, Peter Deming’s cinematography is razor-sharp, Colin Stetson’s snappy score is suitably unsettling. If the outré ending skips the shark, well it’s earned – the satisfying “Menu” has already left us plenty to munch on.