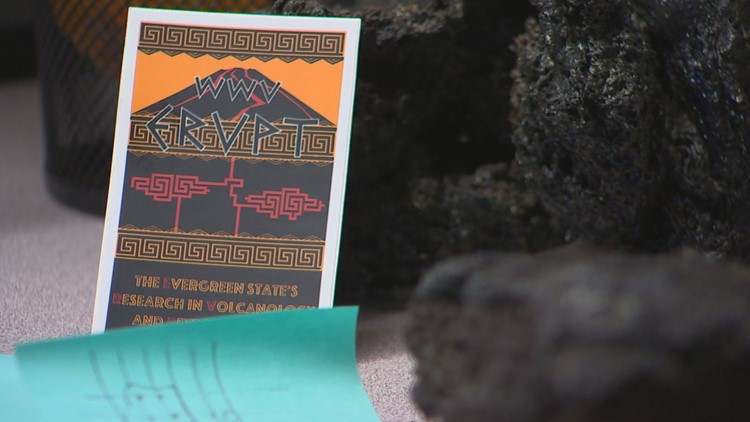 Western Washington University hosts a program dedicated to discovering what makes up some of the most dangerous volcanoes in the United States.

BELLINGHAM, Wash. – This is the most northwestern university of the continental United States, and it is right under the nose of a great mystery.

Western Washington University hosts a geology program dedicated to solving the puzzle of what makes up some of the most dangerous volcanoes in the United States.

“You look at that volcano, right?” DeBari said. “It looks like a mountain with snow on it. But, I think when we look at it, we’re visualizing what’s happening, like 20 kilometers below the surface.”

DeBari was in pre-med as a sophomore at Cornell University in 1980 when Mount St. Helens erupts.

“It feels like it’s from another planet,” DeBari said. “I could never have imagined that I would study cascading volcanoes.”

A few months later, a friend recommended her to take a course in geology and her interest was forever rekindled. She changed her major and devoted her career to studying volcanoes.

With active volcanoes like Mount St. Helens, the Pacific Northwest is an ideal location for geologists and volcanologists like DeBari.

“It was one of the most exciting things for me to be hired here 25 years ago, at Western Washington University, because we have these active volcanoes right in our backyard,” says DeBari. I.

“I really enjoyed not just going to these places but learning how they form and why they look the way they do,” says Walowski.

The pair, along with a professor from Central Washington University, are mapping out the inner workings of the volcano.

And about an hour’s drive from WWU’s campus is the team’s current muse, Mount Baker.

“Why is Koma Kulshan different and how is its personality different?” Walowski said.

They used the native name of Mount Baker, Koma Kulshan out of respect for the Native American tribes that called the land home.

“Volcanoes are creatures of habit,” says DeBari. “So if we know what happened in the past, then we can use that information to prepare for the future.”

Their goal is to find out the story of Koma Kulshan, when, how and why it last erupted.

Revealing that mystery brings them out onto the field.

DeBari and Walowski took KING 5 to a rock face in the hills of Koma Kulshan.

The team discovered that the rock face is the volcano’s most recent major eruption, and it dates back 10,000 years.

“So this is a 10km lava flow that ends at Baker Lake,” DeBari said as he gestured toward the rock face.

With hammers, the group breaks apart rock fragments from the volcano.

They then test the pieces to decide if it’s a good sample to take back to the research lab.

“These are air bubbles that get trapped inside lava as it flows,” DeBari said as she examined a sample.

On the campus of Western Washington University, Graduate Student Amanda Florea slides a piece of rock from Koma Kulshan under a microscope.

“We’re looking at this crystal here, it’s like a millimeter, but then we can go over here and look at all the tiny crystals that you can’t even see with your eyes,” Florea said. naked eye. And we can look at them on a much larger scale through this microscope.”

Florea looks at the sample through a microscope, showing the color and reflection of the crystals.

For an even closer look, geologists and students used scanning electron microscopes to magnify the crystal to 1000 times what the naked eye can see.

It reveals rings on crystals, similar to rings on trees, showing the layers that form it.

This gives clues about the chemicals, temperature and pressure that formed it.

“So this is a story of growth from the core to the periphery,” says DeBari.

The scientists used the data to build a conceptual model of the volcano’s shape below the surface.

They see the volcano as a system of water pipes.

The part where it erupts will be the hose and below: a system of pipes

“Our goal is to build conceptual models of how any individual volcano should behave,” says Walowski. So what does the plumbing underneath look like and how will it affect a possible future eruption?”

Conceptual models are used by the agency for planning and preparation.

“This type of data, the Cascades Volcano Observatory, they are developing risk response plans for the volcanoes they think will be most likely to erupt next,” DeBari said. “The data we collect is the information they use to make those kinds of decisions in their hazard planning.”

“Volcanoes are creatures of habit. And so if we know what happened in the past, then we can use that information to prepare for the future.”

But sometimes their study of volcanoes shows they change.

The most recent reaming ended research on the Augustine Volcano near Homer, Alaska.

Using their scientific methods, they determined how the eruption pattern of the Augustine volcano had changed over time.

This change impacts how surrounding communities plan and prepare for the volcano.

“Augustine last erupted in 2006, it also erupted in 1986, 1976 so it’s a pretty active volcano,” Walowski said. “Augustine Island is really close to Homer, Alaska and Anchorage. So a larger eruption could be really problematic, especially for air travel.”

“Every rock has a story,” said Zenja Seitzinger, a graduate student in Geology at Western Washington. “My project is to look at those crystals and pull out stories about their growth to tell us about what’s happening in the magma chamber in the plumbing.”

Seitzinger hopes to take what she’s learned from the project and turn it into helping communities sitting in the shadow of a volcano, similar to Bellingham, home of Western Washington University, so they can plan Plan and prepare when an eruption occurs in their own backyard.

“Having volcanoes in your backyard, it’s great to know that the research we’re doing directly has the same important impact on the community that I’ve now become a part of,” says Seitzinger. it.

“I think that’s great,” said Florea. “It’s like I got the chance to tell the story of this volcano.”

With an ever-present presence lurking in the Pacific Northwest, the danger that lies beneath will no longer be a mystery.

https://www.king5.com/article/tech/science/scientists-solve-mysteries-volcanoes-pacific-northwest/281-a34b508b-194a-417c-8042-88cdb0c16f49 The mysteries of volcanoes in the Pacific Northwest

Lil Meech Arrested Again … This Time For Sneaking A Gun On An Airplane!!

Queen Mary will reopen in Long Beach after 2020 closure

U.S. Effort to Arm Taiwan Slowed by War in Ukraine

In a Sour Market, Agricultural Commodities Are Still Tasty

Who Wants to Build in the U.S.?