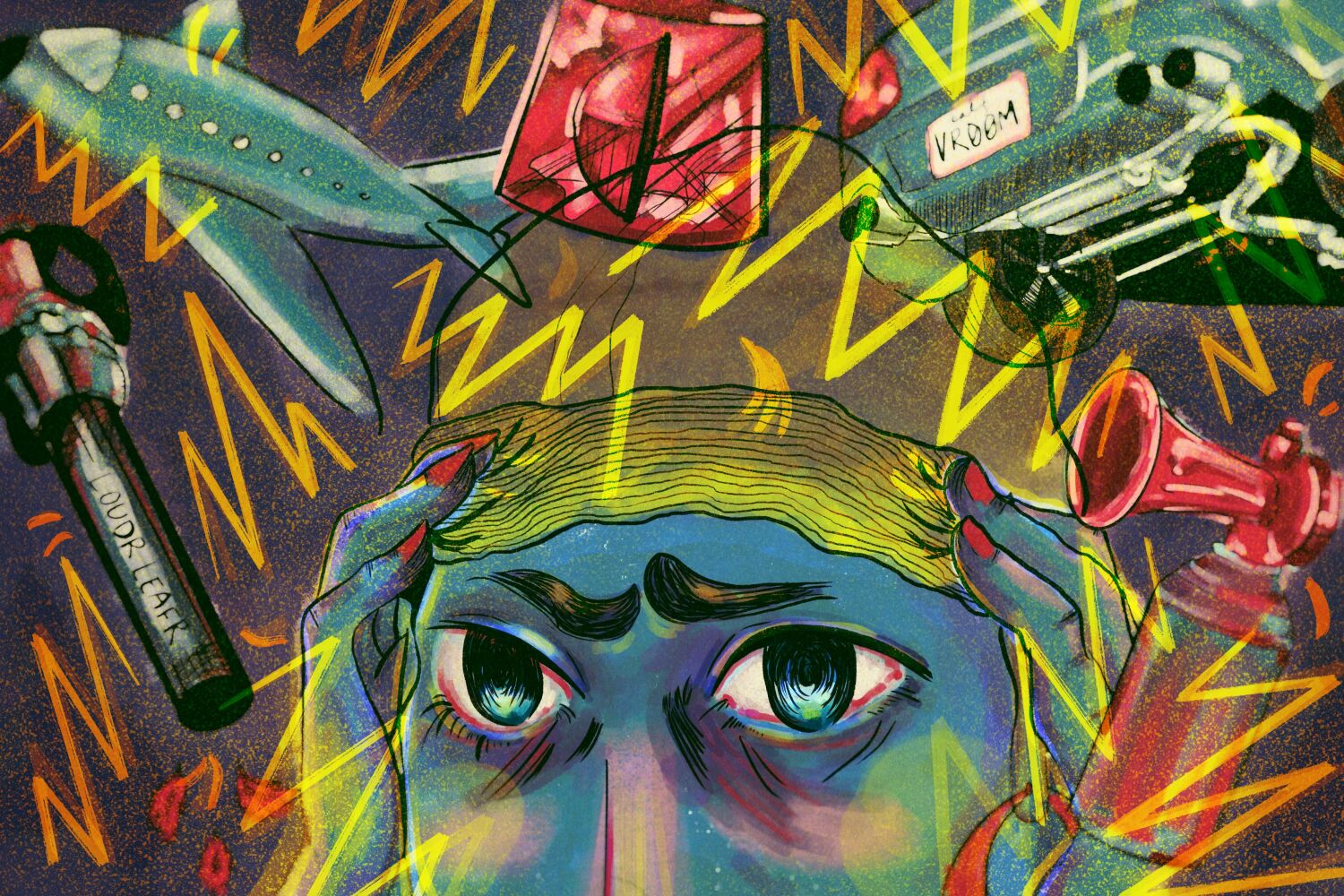 Mike Thomson’s friends refuse to stay with him any longer.

Thomson lives about 50 yards from a busy freeway that bisects the California capital, one that’s increasingly being used as a site for high-speed racing, diesel-spewing big rigs, high-revving motorcycles — and cars illegally modified to make even more noise .

About the only time it settles down is between 3 and 4 a.m. Saturday night, Thomson said.

Otherwise, the noise is almost constant, and most nights he’s woken up five or six times.

“Cars come by and they don’t have mufflers,” said Thomson, 54, who remodels houses for a living. “It’s awful. I don’t recommend it to anyone.”

Thomson is a victim of noise pollution, which health experts say is a growing problem not just limited to our ears but causing stress-related conditions like anxiety, high blood pressure and insomnia.

California lawmakers passed two laws in 2022 aimed at calming the environment. One directs the California Highway Patrol to test noise-detecting cameras that may issue automatic speeding tickets for cars that make noise above a certain level. The other forces drivers of illegally modified cars to repair them before they can be re-registered.

“There’s an aspect of our society that likes to be loud and proud,” said Sen. Anthony Portantino (D-Glendale), author of the Noise Camera Act. “But that shouldn’t affect anyone else’s health in public places.”

Most states have not addressed the attack on our eardrums. Traffic is a major source of noise pollution – which disproportionately affects disadvantaged communities – and it’s becoming increasingly difficult to escape the sounds of leaf blowers, construction work and other disruptive factors.

California laws will take time and have limited effect, but noise experts called them a good start. Still, they’re doing nothing to address overhead noise pollution from circling police helicopters, humming drones and other sources, which falls within the purview of the federal government, said Les Blomberg, executive director of the Noise Pollution Clearinghouse.

In October 2021, the American Public Health Assn. declared noise a public health hazard. Decades of research have linked noise pollution not only to sleep disorders, but also to chronic conditions such as heart disease, cognitive impairment, depression and anxiety.

When there’s a loud noise, the auditory system signals something is wrong, triggering a fight-or-flight response in the body and flooding it with stress hormones that cause inflammation and can ultimately lead to disease, said Peter James, assistant professor of Environmental Health at Harvard University’s TH Chan School of Public Health.

While California Highway Patrol officials will spend the next few years researching noise cameras, they recognize that the noise from street races and so-called sideshows — where people block intersections or parking lots to burn out tires or make “donuts” — over the Limit has risen lasts for several years and is bothering people right now.

Cars in California are said to operate at 95 decibels — slightly louder than a leaf blower or lawnmower — or less. But drivers often modify their cars and motorcycles to make them louder, by adding “whistle tips” to the exhaust system to make noise, or by removing mufflers.

In 2021, the latest full year for which data is available, the CHP issued 2,641 parking tickets for excessive vehicle noise, nearly doubling the 2018 figure of 1,400 allegations.

The American Public Health Assn. says the federal government should regulate noise in the air, on roads, and in workplaces as an environmental hazard, but that task has largely been abandoned since the Federal Noise Abatement and Control Agency was defunded under President Reagan in 1981.

Now the task of reassuring communities rests primarily with states and cities. In California, noise reduction is often a by-product of other environmental policy changes. For example, the state will ban the sale of noisy gas-powered leaf blowers from 2024, a policy primarily aimed at reducing smog-causing emissions.

One of California’s noise abatement laws, AB 2496, passed in 2022, requires owners of vehicles ticketed for noise pollution to resolve the issue before they can re-register them through the Department of Motor Vehicles. Currently, drivers can pay a fine and leave their illegally modified cars as they are. The law will come into force in 2027.

The other law, SB 1097, directs highway patrol to recommend a brand of noise-detection cameras to lawmakers by 2025. These cameras, already in use in Paris, New York City and Knoxville, Tennessee, would automatically issue speeding tickets if they spotted a car rumbled too loudly down the street.

Originally, the law would have created pilot programs to begin testing the cameras in six cities, but lawmakers said they wanted to slow down and only approved the study.

Portantino said he was frustrated by the delay, mostly because the streets of Los Angeles had become almost unbearably loud.

“It’s getting worse,” Portantino said. “People are tinkering with their cars and street racing continues to be a problem.”

The state is smart to target the loudest noises first, the cars and motorcycles that bother people the most, Blomberg said.

“You can make any car that comes off the assembly line half as loud as it is now and it would have very little impact if you didn’t deal with all the people taking their mufflers off,” he said. “That outweighs everything.”

Traffic noise does not affect everyone equally. In a 2017 study, James and colleagues found that nighttime noise levels were higher in low-income communities and those with a large proportion of non-white residents.

“We’ve made these conscious or unconscious choices as a society to move minority and lower-income communities that have the least amount of political power into areas near freeways and airports,” James said.

Elaine Jackson, 62, feels that inequality in her low-income neighborhood sandwiched between freeways in north Sacramento.

Showmen and traffic noise keep them awake at weekends. Her nerves are on edge, she’s losing sleep, her dogs are panicking, and she generally feels unsafe and forgotten, fearing that new developments in her neighborhood will only bring more traffic, noise and air pollution.

Police and lawmakers don’t seem to care, she said, although she and her neighbors constantly voice their concerns to officers.

“People have a hard time falling asleep at night,” Jackson said. “And that’s a question of quality of life.”

This story was produced by KHN (Kaiser Health News), a national newsroom that reports extensively on health issues and is one of the three main operating programs of the KFF (Kaiser Family Foundation). KHN is the publisher of California Healthline, an editorially independent service of the California Health Care Foundation.

Best dating sites and apps for serious relationships in 2023