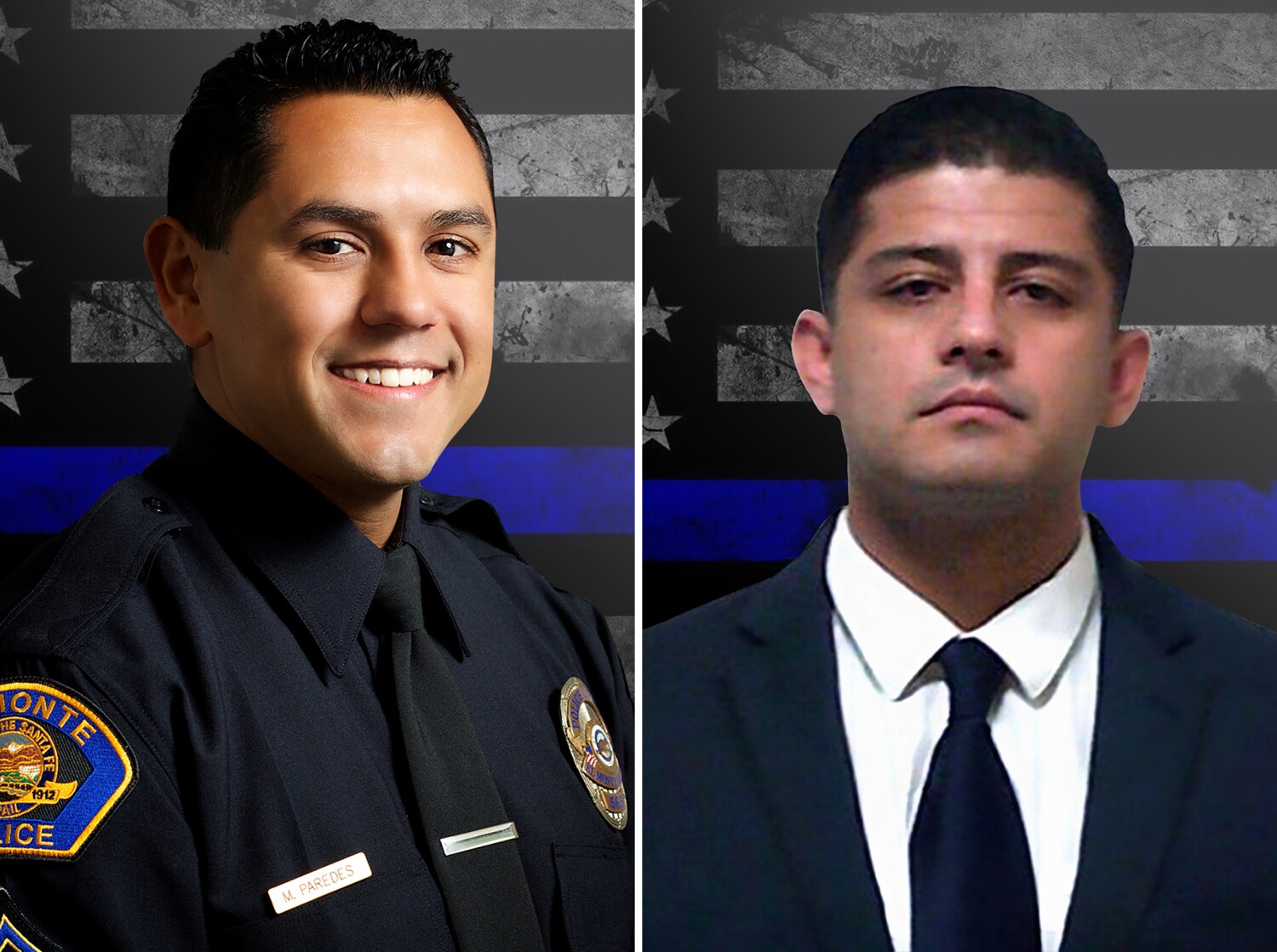 The day after a deadly shooting at a motel rocked El Monte, the police officers killed were identified Wednesday as two men united by a shared drive to serve the city where they grew up.

Capt. Michael Paredes, 42, and Officer Joseph Santana, 31, were killed Tuesday while responding to a reported stabbing at an El Monte motel. Both leave behind grieving families.

“You grew up here; For us, they are El Monte’s own construction,” said Mayor Jessica Ancona. “These are our boys.”

Paredes was a nearly 22-year El Monte Police Department veteran who started out as a cadet before being sworn in as a full-time officer in July 2000. He leaves behind his wife, a son and a daughter.

On Facebook, his sister had changed her profile picture to his badge – #565 – and several people had commented with prayer hand emojis. Many wrote that he was a hero.

“At this point, my family and I just want to mourn our loss and not speak publicly,” a family member of Paredes told the Times, declining to comment further.

Ancona described him as a seasoned officer “who graduated from our El Monte schools” and who was “excited to be on the force.”

Santana worked for his hometown of El Monte for six years as a government clerk before beginning his law enforcement career as a deputy deputy with the San Bernardino County Sheriff’s Department.

“We are deeply touched by this tragic loss,” the Sheriff’s Department said on its Facebook page. “Officer Santana began his law enforcement career with our department in March 2018 and is an Academy Class 211 graduate.”

He served at the West Valley Detention Center until last October.

“He was a great partner and loved by everyone who knew him,” the sheriff’s department wrote.

He leaves behind his wife, a daughter and two twins.

On Wednesday, several people commented on a photo Santana posted to Facebook a year ago of him holding a toddler.

“God rest his soul, thank you for your service sir,” read one.

“Prayers to his wife, children, friends and family and brothers/sisters in blue,” said another.

Paredes and Santana “made the ultimate sacrifice while pursuing noble professions and serving the community they loved,” the City of El Monte said in a press release.

El Monte Councilwoman Maria Morales said on social media that she was “heartbroken”.

“They went to work today protecting the people of our town and answering the call for help,” she wrote in a Facebook post early Wednesday. “Unfortunately, their selfless actions led them to a place of evil and they were taken from us in a senseless act of cowardice.”

“As a city official and, more importantly, as a mother, I can only imagine the pain and suffering their families are now enduring,” she wrote.

The Police Department and El Monte Police Officers Assn. Established an official donation page to support the families of Paredes and Santana.

https://www.latimes.com/california/story/2022-06-15/two-el-monte-police-officers-killed-in-shootout-identified These are the two El Monte police officers killed in a shootout