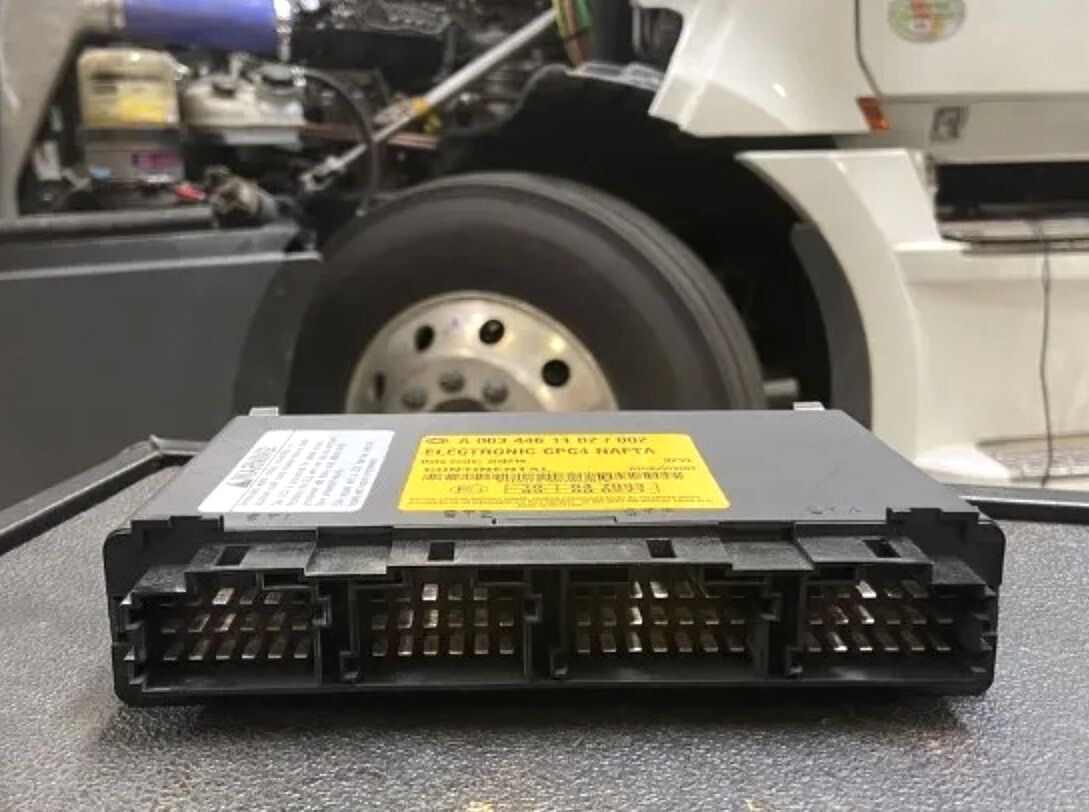 The crime was not noticed by most law enforcement agencies until November, when the San Bernardino County Sheriff’s Department began hearing reports of dozens of semi-trucks being hit by the latest crime trend.

Theft can take as little as minutes, according to law enforcement officials, but the cost to truck drivers and logistics companies can run into thousands of dollars.

“It’s pretty common in our area,” said Gloria Huerta, a spokeswoman for the sheriff’s department. “Once we realized it was a trend, we started following it.”

Common powertrain controller modules, or CPCs, are increasingly being stolen from parked trucks, causing not only hundreds of dollars in damage to the lost unit, but potentially thousands of dollars in lost drivers and businesses for trucks that are then rendered inoperable.

Known as the “brain” for tractor units, the CPC controls engine and powertrain functions for the vehicle, meaning the truck cannot be operated until the unit is replaced. The module can cost anywhere from $1,500 to $2,000. However, high demand for the part can mean it can cost around $3,000 on the black market or from an unauthorized seller.

In San Bernardino County, law enforcement officials said they noticed thieves hitting trucks in Fontana, Yucaipa, Victorville, Highland and San Bernardino, Huerta said. There are many storage centers in the region where trucks transport cargo. Many of the thefts occurred in repair shops, truck yards and unpaved properties.

So far, no arrests have been made by the agency, he said.

The sudden surge in thefts targeting the device was reminiscent of how thieves targeted catalytic converters in the past. But law enforcement officials caution that in this case, thieves don’t have to crawl under the vehicle or use heavy equipment to remove the part. Instead, the thief only has to break into the cab of the truck.

“It only takes a minute or two to take it out,” Huerta said.

The burglaries happened not just in California, but across the country. In May, Daimler Truck North America, a commercial vehicle maker, issued an alert warning that incidents had been reported at terminals and dealerships across the country. At an auction yard in Pennsylvania, the company said CPC units were stolen from 24 trucks.

The company recommends that dealers and repair shops check CPC unit identification numbers against the company’s database to ensure the units have not been stolen or sold on the black market.

Sergeant Robert Pair of the Bakersfield Police Department said investigators saw no thefts by CPC units throughout 2021. Then, during a two-month period beginning in July, investigators received 27 reports of CPC module thefts, which immediately caught their attention.

“Most of these thefts take place on properties where there is no security,” Pair said. “Many motorists try to save money by parking in open areas without security or in unpaved lots.”

The rise in thefts also prompted the Bakersfield Police Department to issue tips to prevent thefts, including parking in a lighted area and within the field of surveillance cameras. Motorists are urged to park in security guarded lots and to plan ahead for parking on long drives.

Make sure all doors are locked and windows are up when the vehicle is parked – good tips to deter theft in any vehicle – is also recommended.

The Bakersfield Police Department is also urging drivers and companies to enable password protection for the CPC units.

Detectives are also paying attention to what’s been driving demand for the part lately. If thieves are after the device, Pair points out that there is a market out there with vendors willing to buy the stolen goods.

“It’s one of those things where you end up having someone to sell it to,” Pair said. “There’s a shady repair shop somewhere in the process.”

https://www.latimes.com/california/story/2022-12-09/thefts-semi-trucks Thieves are targeting semitrucks to steal one pricey part

Irvine romance scammer who claimed to be Navy SEAL took up to $1.5 million