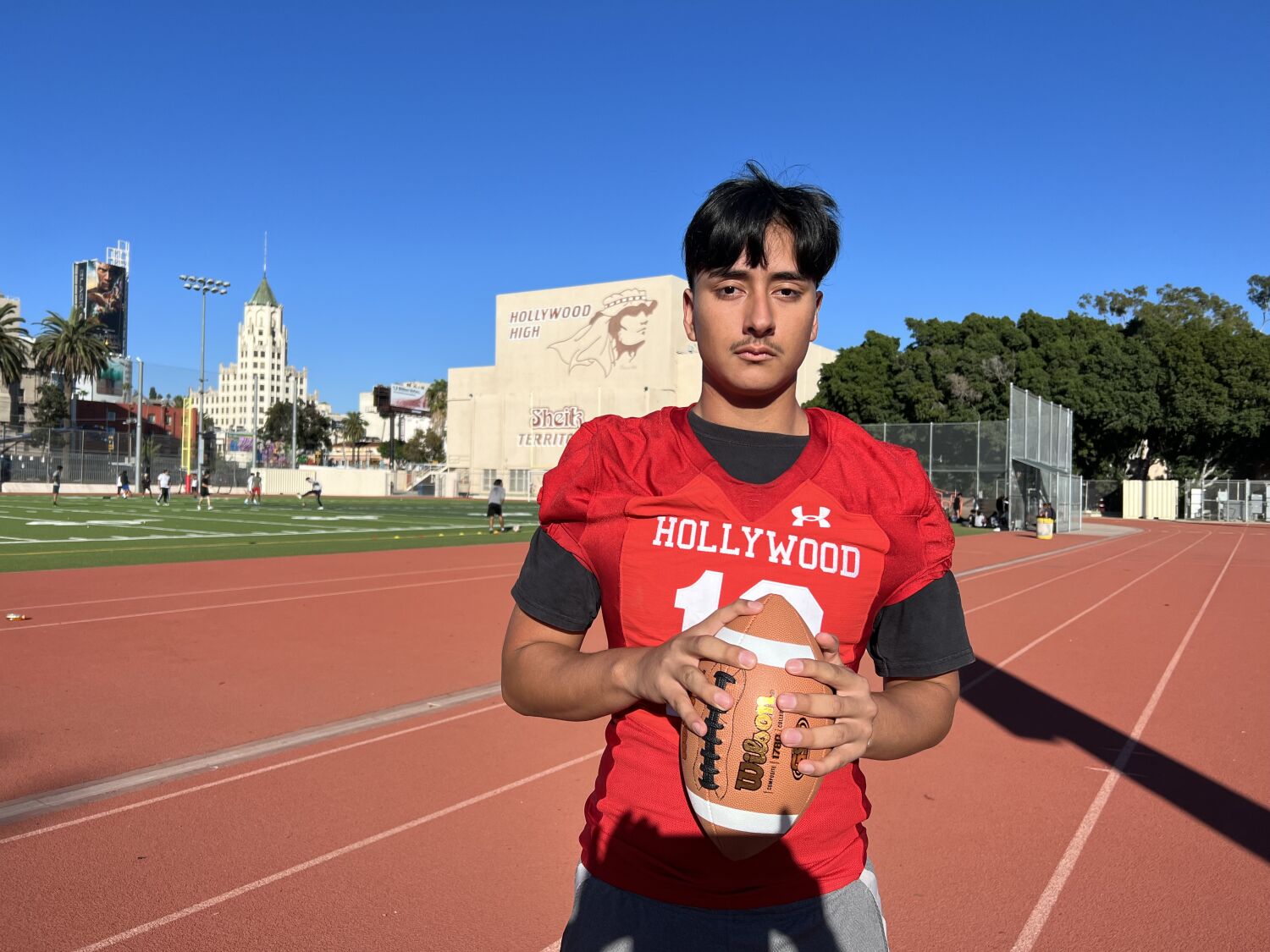 Aldo Infante looks up from the Hollywood High football field and sees history: The Roosevelt Hotel, the El Capitan Theatre, the Hollywood sign, the school auditorium.

“I know everyone wants to go here,” he said. “People come for opportunities. Many superstars, actors, comedians came here and made their dreams come true.”

Having lived in Hollywood for most of his life, Infante stars in a sports fable even more far-fetched than Eli Manning’s portrayal of the mythical Chad Powers.

Somehow, in his senior year of high school, with no prior experience in a team sport, Infante led Hollywood to a 5-4 record. Last season, the Sheiks went 0-8.

How someone who is 6ft 2, 205 pounds walked around campus unnoticed and wasn’t recruited to play a sport until he showed up for soccer tryouts at a park last summer is just beyond belief. But it happened.

He attended Fairfax as a freshman and said he asked to play football after the season started but was told it was too late to join. COVID-19 hit his second year so no sport. As a junior, he moved to Hollywood. He wanted to try football but said there had been no attempt to get checked out. The doctor was too busy. Infante showed up to watch home games as Hollywood went winless.

Enter first-year head coach Alistair Jones, who hadn’t coached since his days as an assistant at Lynwood Firebaugh in 2015. He held tryouts last summer. A player asked Infante to participate in a Zoom call for people interested in playing. He showed up at a park for tryouts. There were three quarterbacks.

Infante had no problem picking up pieces. He had a mistake in his throwing motion that was corrected. Then it was time to see how he would do at tackle football.

“Our first tackle that I remember was difficult for me,” he said. “I didn’t know how to tackle it. I said, ‘I have a big body. I have to use it.” Then everyone started hitting me, and people smaller than me hit me. I thought, ‘Okay, this is a lot harder.’ When I got hit by a person in my first game, I didn’t feel it, but I was like, ‘Whoa, that was really fast.'”

Infante’s football career almost ended after two games. Against Van Nuys, during a 7-0 loss, he wanted to come in late to play the defensive end to help the team. He began arguing loudly with Jones on the sidelines, with fans able to hear him.

“Put me in, I’m better than them all,” Infante said.

Jones replied: “I’m the coach, you’re the player. If you want my job, you should apply.”

Infante was sent to the dressing room not knowing if his football career was over.

It was a moment that could have changed his life. He didn’t know how to express himself when he was frustrated. He had no father and had never played a team sport. Baseball coach Chris Dickerson spoke to him. So does the athletic director. Jones spoke to him three days later.

“It was an educational moment,” Jones said. “That’s why I train football. Some of these children have no fathers. I’m not trying to be the father. I try to be the role model. Sometimes you have to be the bad guy.”

Infante said being removed from the game and then reinstated on the team is a life lesson he will never forget.

“Since that day, I listen more and take his advice,” Infante said. “Everything worked – all sequences.”

Unfortunately, the Hollywood season is over. The Sheiks were not selected for the City Section playoffs.

Whether Infante will continue playing football remains uncertain, but what he’s learned this season he’ll take with him to his next job, his next relationship, his next awkward moment.

“I think being fatherless was tough for me because I never really had that person as a mentor,” he said. “The coach was like my father figure, teaching me things.”

As quarterback for the school with the most iconic stadium setting in Los Angeles, Infante was a true Chad Powers at the school, known for bringing stars out of thin air. After not playing any sports in high school for three years, he also wants to play soccer and baseball.

What a Hollywood story.

Sports diplomacy: How the U.S. uses athletics to forge bonds

Hurricanes host the Kraken in a non-conference matchup