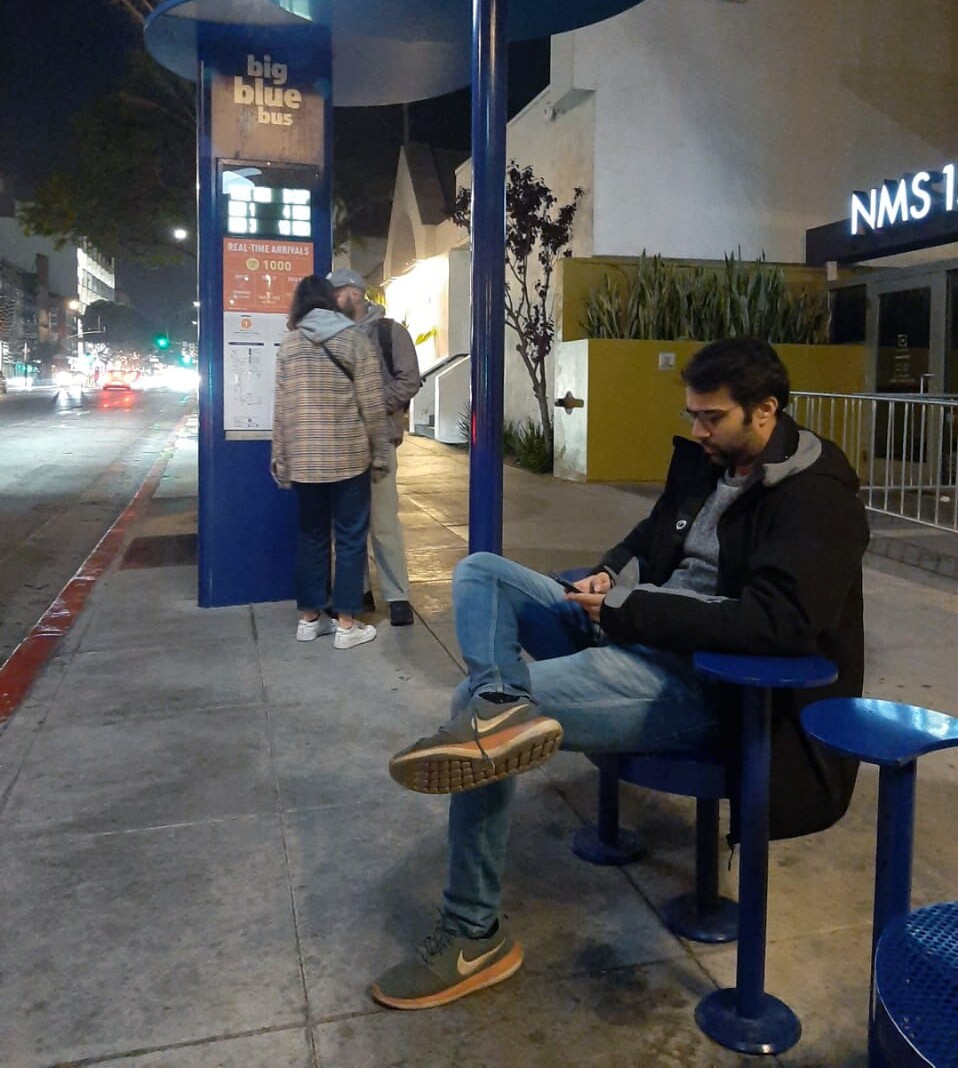 We’ve just wrapped up a late-night shopping spree at the Walmart in Lawndale and, in our nagging state of hunger, spotted a gorgeous red and yellow sign hanging over the parking lot.

It had been a long day and my roommate Somesh and I were famished and exhausted. We trudged across the vast, empty lot with our groceries in dizzying anticipation of greasy food. The doors of the Del Taco were locked, but the lights were on and we spotted a workman in the drive-through window. We walked over to peruse the lighted menu. I multiplied the prices by 80 to get the cost in rupees — the currency back home in Mumbai — and settled on a chicken taco and a beef taco.

We marched up the paved driveway and knocked on the window.

“You don’t have a car and this is a drive-thru.”

I looked back, there was no car in line or anywhere near. The parking lot was desolate. We haven’t stopped anyone.

“How important is that?” I asked.

We tried to reason with him, but he had better things to do. He went back to his stool and continued reading the newspaper. He seemed to have a lot of practice at not selling tacos.

I turned to Somesh in total perplexity – we are both 31 years old. He half-jokingly suggested that they wheel me through the driveway in a Walmart cart. Then we considered hiring an Uber just to drive us through. But how would that work if our pickup and destination are the same location? Also, it sounded expensive when I thought about it in rupees.

So we went to our apartment and ate scrambled egg sandwiches.

Before I came to LA in May for my journalism fellowship with the LA Times, a friend had told me that surviving in the city without a car would be difficult. I thought it was exaggerated. It may have been my first time in America but I have traveled extensively in Europe where it doesn’t matter if you are close to the city center or not; The metro lines and buses have excellent connectivity.

Needless to say, they don’t do that in Los Angeles. Public transport feels completely unencumbered by punctuality, availability, geography and safety.

But it wasn’t until that night at Del Taco that I realized that the region’s neglect of the car-poor bordered on hostility.

I was later told that for safety reasons, some fast food places only allow drive-through orders from people in motorized vehicles. That didn’t fit. Can’t a driver in a car hide a gun better than a person approaching the restaurant — and all of its security cameras — on foot? Can’t a driver with this weapon just jump out of his car when the cashier turns away to get the food?

Of course they could. I think the whole incident implies that the city considers people without cars to be second-class citizens.

As a visitor, this created many absurd moments. I didn’t have the navigational skills of a longtime resident without a car to avoid these traffic jams. But coming from India to the swanky first world city of Los Angeles, it was shocking and sad to see how many people had to work with this broken system every day of their lives.

During my time in the LA area, I lived in three cities — Lawndale, Inglewood, and Santa Monica — and public transportation didn’t work efficiently for me in any of them. I ran longer than I should have. I’ve been on buses for hours that would take minutes if they didn’t stop so often. I’ve been on sidewalks that ended abruptly, forcing me to backtrack to cross busy boulevards. I’ve been in taxis and spent 20 times my usual money because the buses were too slow. I heard there are subways and light rails in LA, but they weren’t anywhere near me. I tried my hand at cycling but the bike lanes were dodgy, the traffic was fast and cycling is damn tiring. I didn’t want to bike 10 miles for every job interview.

I was in Inglewood when I booked my COVID-19 booster shots at Walgreens. The pharmacy was a little over half an hour’s walk from my apartment. It was also a five minute cab ride but $14 for five minutes didn’t seem worth it. I couldn’t stop multiplying by 80. The taxi ride is equivalent to 1120 rupees. With that amount of money, I could drive from one end of Mumbai to the other during rush hour, tip the driver handsomely, and still save money on dinner. A taxi was out of the question.

Google Maps showed another option. There was a bus that would drop me a five minute walk from Walgreens. That seemed reasonable. What I didn’t realize is that the bus stop was a 25 minute walk from home. When I got there, the bus only came after 15 minutes. And I ended up spending more time on the trip than if I had just walked the whole way.

After getting the shot, I didn’t make the same mistake of looking for the bus. Instead I made a new one.

There was a supermarket right next to me and I had a list of things we needed. That would save me a trip to my local grocery store. The road-experienced local resident might know better. But I ended up buying some of the heaviest items on the list: onions, potatoes, a can of milk, a packet of chicken, and more. After putting it in three bags, I found my left arm was already sore from the injection I had received about 25 minutes earlier. I grabbed all the bags in my right hand and walked the 30 minutes back to my apartment. It was hot and unshaded. No one seems to bother planting trees for pedestrians. But to be fair they don’t do that in Mumbai either and the heat doesn’t bother me. What bothered me was that my right arm felt like it was being pulled out of its socket.

The next morning that arm hurt more than the reinforced one.

You learn about a location on a bus.

One night my roommate and I got on the bus to go to Redondo Beach. A few stops later, an old woman walked in with her dog. She realized we weren’t locals so she started talking to us. During the small talk, we revealed that we were journalists for the Times.

Her face turned red. “The Times should tell the truth,” she cried.

“When did it lie?” I asked her with a poker face.

Over the next 10 minutes she told us that Dr. Anthony Fauci is a scammer, the COVID vaccines are putting people at risk and The Times hasn’t covered any of it. Redondo Beach couldn’t come sooner.

Although we laughed about it, what happened a few weeks later unsettled us. We sat on the first of the three buses we had to take to get to Santa Monica. As our stop drew closer, we made our way to the back door. A man sat by the door and stared relentlessly at us. Just as we were about to get off, he asked in a hostile tone, “Are you two Muslims?”

We were amazed. Since we came to America we have read about several mass shootings and hate crimes. The data also shows that non-white people are disproportionately affected by gun violence. I was feeling extremely insecure at the moment because I have a bizarre phobia of things that can potentially kill me.

But we kept our composure. “There is a problem?” my roommate snapped back. Before the man could answer, we got off the bus and the doors closed behind us. I really wanted a car now.

On the plus side, I’ve never found it easier to strike up a conversation while meeting new people. As soon as I anticipate a moment of awkward silence, I start whining about LA’s public transit system. That buys me at least five more minutes. It’s the history of America – except for New York – they tell me.

America has spent trillions on transit over the last century. In 2019, $79 billion in public spending went into it. I remember a line from ‘Yes Minister’, a political satire on British television: ‘Corruption is not government policy. That’s just government practice.” So it’s probably unfair to say that American policy is to have poor public transportation. It’s American practice only.

As I look back on my time in LA, it feels like I’ve divided my days wondering what’s more valuable: my time or my scholarship. Three months later I’m heading home after failing to save both.

The only time I had no doubts about booking a cab was before I went off to tell a story.

But one morning, despite a Lyft, I got to my registration office 20 minutes late. I was working with Doug Smith on a South LA story. Doug sent me the address the night before. The next morning the driver said we had reached our destination and I called Doug. “Are you in a black car?” he asked. “Yes,” I said and got out of the car.

There was only one problem. The black car in front of Doug belonged to someone else. And I was three long blocks away. I walked the rest of the way and already found Doug in two interviews.

When I meet my family and friends at home, I will share these anecdotes with them in the same tone I wrote this column – slightly irritated, mostly amused. But I feel for the working class in LA. According to a Harvard study, commute time is the most powerful factor in escaping poverty. Some people in LA have cars but no houses. Absurd doesn’t even begin to describe it. How good the public transport is says a lot about how much the place cares about its poor. LA, or America, just not.

https://www.latimes.com/california/story/2022-08-22/coming-to-la-without-a-car Try the Del Taco drive-thru on foot: L.A. without a car

Skechers D’Lites Review: The Sneakers You Need For 2022

An L.A. mob once killed 18 Chinese people. Now, a push for a memorial