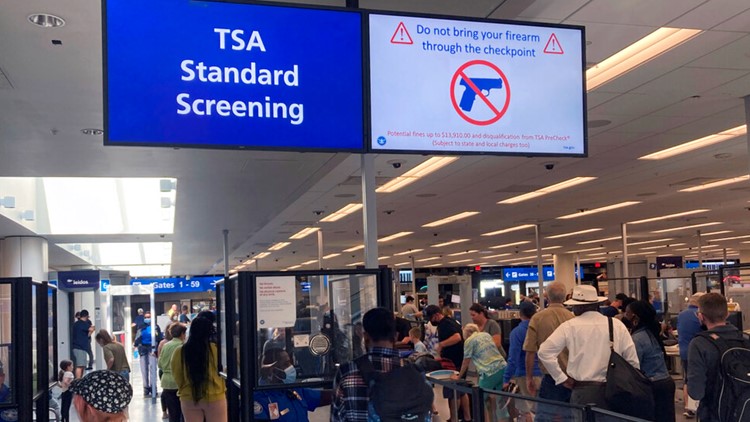 NEW YORK — The Transportation Security Administration is increasing fines for people caught carrying guns in hand luggage after blocking a record number of guns at security checkpoints this year .

TSA officers have found 6,301 firearms in hand luggage so far this year, beating the previous record of 5,972 discovered in 2021. This number has steadily increased over the past decade; in 2012, 1,549 firearms were discovered at security checkpoints.

The TSA said 88% of firearms found this year were loaded.

Weapons laws vary by location, but guns are never allowed in carry-on baggage at any airport security checkpoint, even if a passenger has a weapon permit. Passengers transporting firearms must keep them in a locked box in their checked baggage. The TSA said it also had to notify the airline.

At a congressional hearing earlier this year, some lawmakers and airport managers called for higher fines, gun safety classes for violators and other measures. They say maximum fines are rarely imposed and are clearly not deterrent.

But other lawmakers said most passengers caught simply forgot they were carrying guns, and higher fines won’t stop that problem.

When the TSA finds a gun, they usually check to see if it was stolen or related to a previous crime. The agency may also confiscate firearms.

In addition to the fine, an amount determined by the TSA based on the circumstances of each case, the TSA will revoke PreCheck eligibility for at least 5 years for anyone caught with a firearm at a security checkpoint. security. Passengers may also be arrested for weapons violations depending on state or local laws at the airport’s location.

Hey, Santa, how about a fresh start at L.A. City Hall?

4 kids arrested after carjacking and pursuit through Bellevue

Democrat, nonpartisan face off in Washington’s secretary of state race