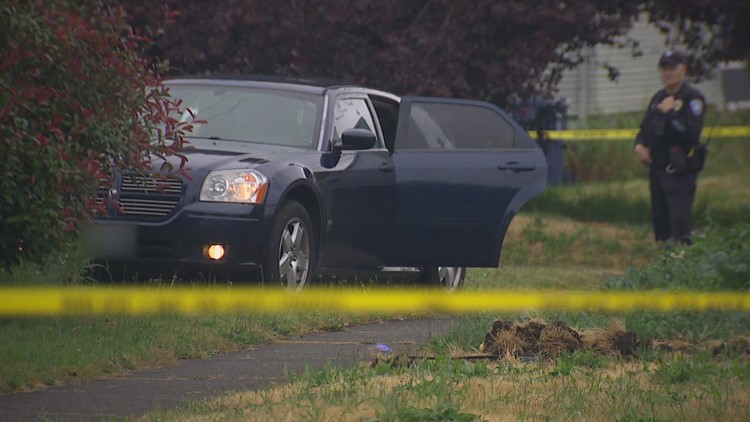 Shots were fired into a car occupied by a group of youths on Wednesday.

TACOMA, Wash. – Two 17-year-old male suspects were arrested Thursday for their alleged involvement in the shooting and killing of a 14-year-old girl in Tacoma’s Hilltop neighborhood.

The suspects were each charged with first-degree murder.

One suspect was arrested around 4pm and the second turned himself in at Remann Hall around 6.45pm

According to the Tacoma Police Department, a group of youths were in a car in the South 19th Street and MLK Jr Way area Wednesday when they were shot. Police said a 14-year-old girl, identified as Iyana Ussery, who was in the vehicle was shot.

Police said the victims drove to the 1900 block of South Ainsworth and called for medical attention. Responding officers gave Iyana life-saving treatment, but she was pronounced dead at the scene.

The investigation into the shooting continues.

Meanwhile, a peace walk was held at the Hilltop on Thursday night, with more than 100 people mourning the teenager and expressing their frustration. In addition to community members, Tacoma Police Chief Avery Moore, Mayor Victoria Woodards, Sen. T’wina Nobles and Rep. Derek Kilmer were in attendance.

“Are we failing our young people as adults and leaders in our community?” asked Brendan Nelson of the Peace Lutheran Church.

Nelson was mentoring a group of young people when the car full of youngsters pulled up.

“To see that, we talked about trauma and how we can be thankful and thankful for things when there’s so much chaos in the world and then we come back to a lost life here in our neighborhood,” he said Nelson.

Now Nelson must begin to understand a tragedy that happened so close to home.

“It’s really difficult for them to actually see it, to know that there’s a young person lying on the ground just feet away from them,” Nelson said.

Tacoma Cease Fire’s Terrance Turner, who organized the peace march, calls on everyone in the community to stand up against the violence. He hoped young people would attend the event.

“It’s a shared community so it’s a shared responsibility and they have an integral role that they play and they can start to come up today and say we’re tired of little kids getting killed and nothing happened,” he said. “It doesn’t matter how many marches we do, nothing brings that kid back, period, so what can we do other than at this event, where it’s real.”

Representatives of Iyana’s family spoke on her behalf. They described her as a “peacemaker” and “always trying to bring the family together.”

One of Iyana’s friends, who said he was there when the shooting took place, said, “Before Iyana died, the last thing she did was smile at me.”

Police Chief Avery Moore issued a statement on the shootings, saying in part that “the murder of a child rips the foundation of our community and no child should fear their community, nor should parents have to bury a child. “

’90 Day Fiancé’: Yvette Arellano Charged With Domestic Violence Against Her Husband Mohamed Abdelhamed-‘Allegations Are Completely False And Just A Ploy To Keep Him In The US’