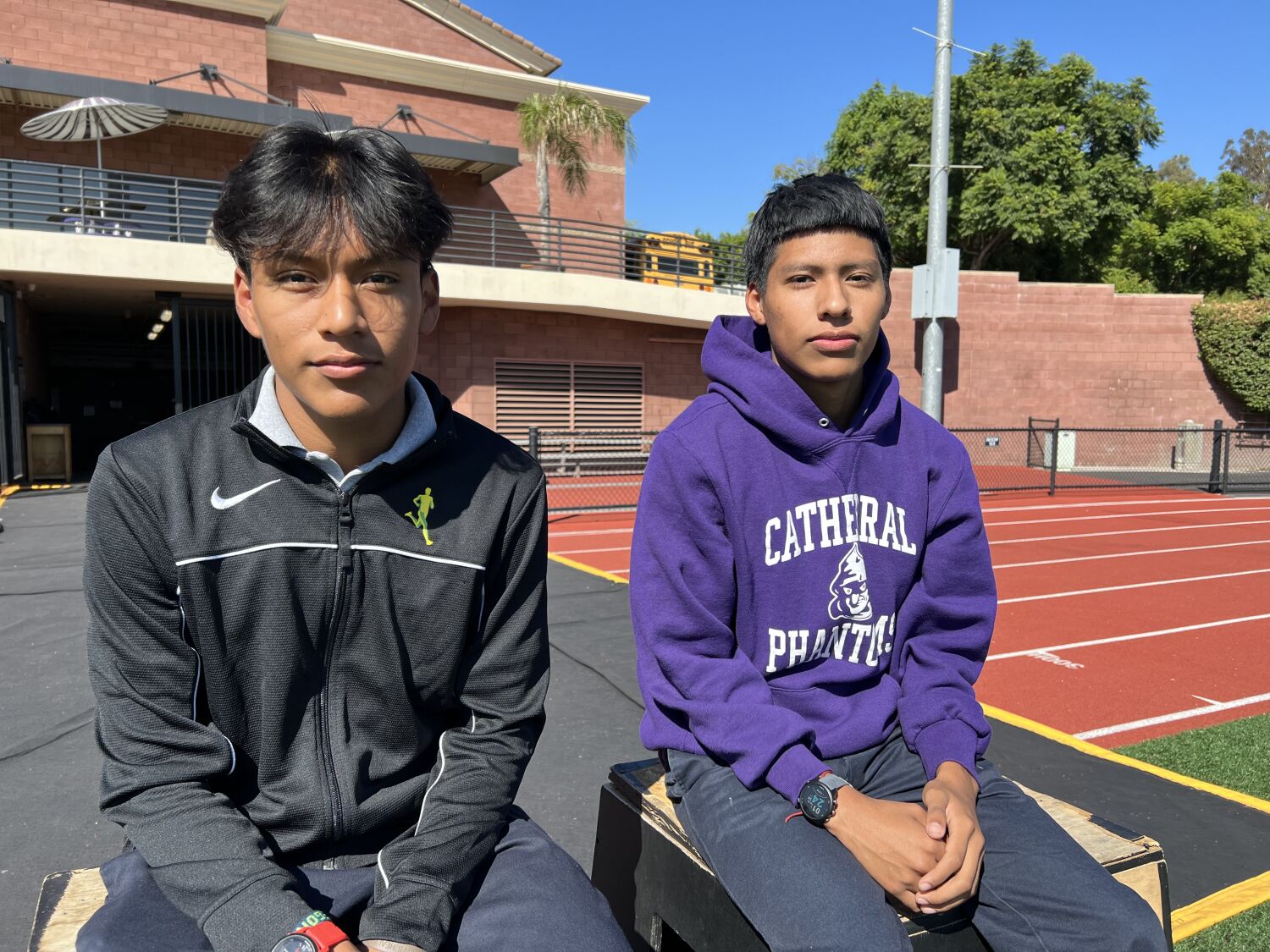 Their names are M&M, Little Manny and Big Manny and the two Mannys.

It’s sometimes confusing watching juniors Emmanuel Hernandez and Emmanuel Perez run for the LA Cathedral High cross-country team. Sometimes they’re inseparable, and when reporters ask to speak to “Emmanuel,” the answer is, “Which one?”

They placed second and third respectively at the Mt. SAC Invitational on Oct. 22 and led Cathedral to No. 1 in Southern Section Division 4. Neither knew the other until Perez showed up at Cathedral last year. Now they push each other and run in tandem, with no limits to where it may lead.

Sixty miles a week they run together around the hills of Elysian Park, past the wonders of Dodger Stadium. When they race, they think of the sacrifices made by their parents, who were all from Mexico.

“I always think of her when I race and I want to make her proud,” Hernandez said of his mother.

“I’m thinking of my father,” Perez said. “How much he works for me. I want to show him what I’m working on. He gave me the opportunity to go to school and I’m trying to show him. I want to make him proud.”

Yes, classmates are in disbelief when told Hernandez and Perez run 60 miles a week.

“Are you crazy?” is the typical answer.

The Mannys love it because all that training and preparation means they can endure the pain that comes with trying to finish strong in a three-mile race.

Pain comes with running, but they say it’s more mental than physical.

“When I’m in pain during a race, it’s all mental,” Hernandez said. “I tell myself I can finish, I can’t give up.”

Perez said: “You’re exhausted and you have to try to kick. It’s more mental.”

When asked what hurts the most when running, they said it’s the calves that tense up first. Then the hamstrings. Then the whole body. The pain threshold is a test of will.

“You’re trying to tell yourself to keep walking,” Perez said.

Martin Farfan, Cathedral’s cross country coach, believes both Emmanuels have a chance to be among the best in the state.

“As a 27-year-old head cross-country coach at Cathedral, I’ve never had a 1-2 like hers,” he said. “Both will break all distance records set by the school at Cathedral.”

The state championships will be held on November 19 at Woodward Park in Fresno. Cathedral will be a contender in Division IV. But are they ready to take on young twins Leo and Lex from Newbury Park?

It could be the Mannys versus the twins. Talk about the confusion of watching four athletes who are difficult to identify with your own eyes.

“You’re too good,” Hernandez said. “You’re on a whole different level. Maybe for the racing season.”

Andy Cohen Reveals What Was In Lisa Rinna’s Manila Envelope

Premier League’s best and worst kits of the past 30 years, from instant classics to clashing catastrophes

Dusty Baker to return as champion Astros’ manager in 2023