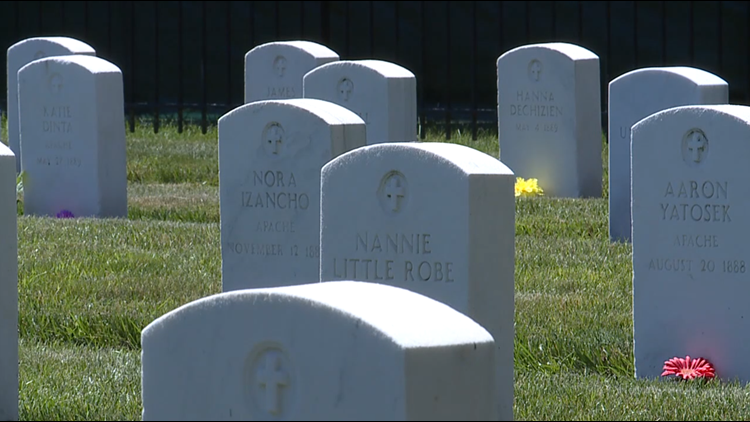 On Saturday, the army excavated grave B-13 believed to belong to Wade Ayres of the Catawba Indian Nation. Instead, the remains matched those of a teenage girl.

Remains exhumed from a cemetery at a US Army base in Pennsylvania do not belong to the Native American teen believed to have been buried there more than a century ago, the military said.

The Army is digging up the remains of eight Native American children who died at the government-run Carlisle Indian Industrial School and plans to give custody to the children’s closest living relatives.

On Saturday, the Army exhumed grave B-13 believed to belong to Wade Ayres of the Catawba Indian Nation of South Carolina, who died in 1904.

The remains did not match those of a man aged 13 or 14, but corresponded to a woman aged 15 to 20, the army said in a statement.

The girl’s remains were reinterred in the same grave on Monday and marked as unknown.

“The Army is committed to gathering more information to determine where the remains of Wade Ayres are buried so that he can be returned to his family and the Catawba Nation,” the Army said.

A message was left with Catawba officials on Tuesday seeking additional information.

The exhumation process began earlier this month and is the fifth in Carlisle since 2017. More than 20 sets of Native American remains were given to family members in previous rounds.

More than 10,000 children from more than 140 tribes attended Carlisle Indian Industrial School between 1879 and 1918, including famed Olympian Jim Thorpe, as part of a US policy to force Native American children to conform to white society.

The school took steps to separate students from their culture, cutting off their braids, dressing them in military-style uniforms and punishing them for speaking their native language.

About 186 children were originally buried in the cemetery on the site.

In 2017, a grave believed to belong to a 10-year-old Native American child actually contained two sets of remains, from a male teenager and an individual of undetermined age and gender.