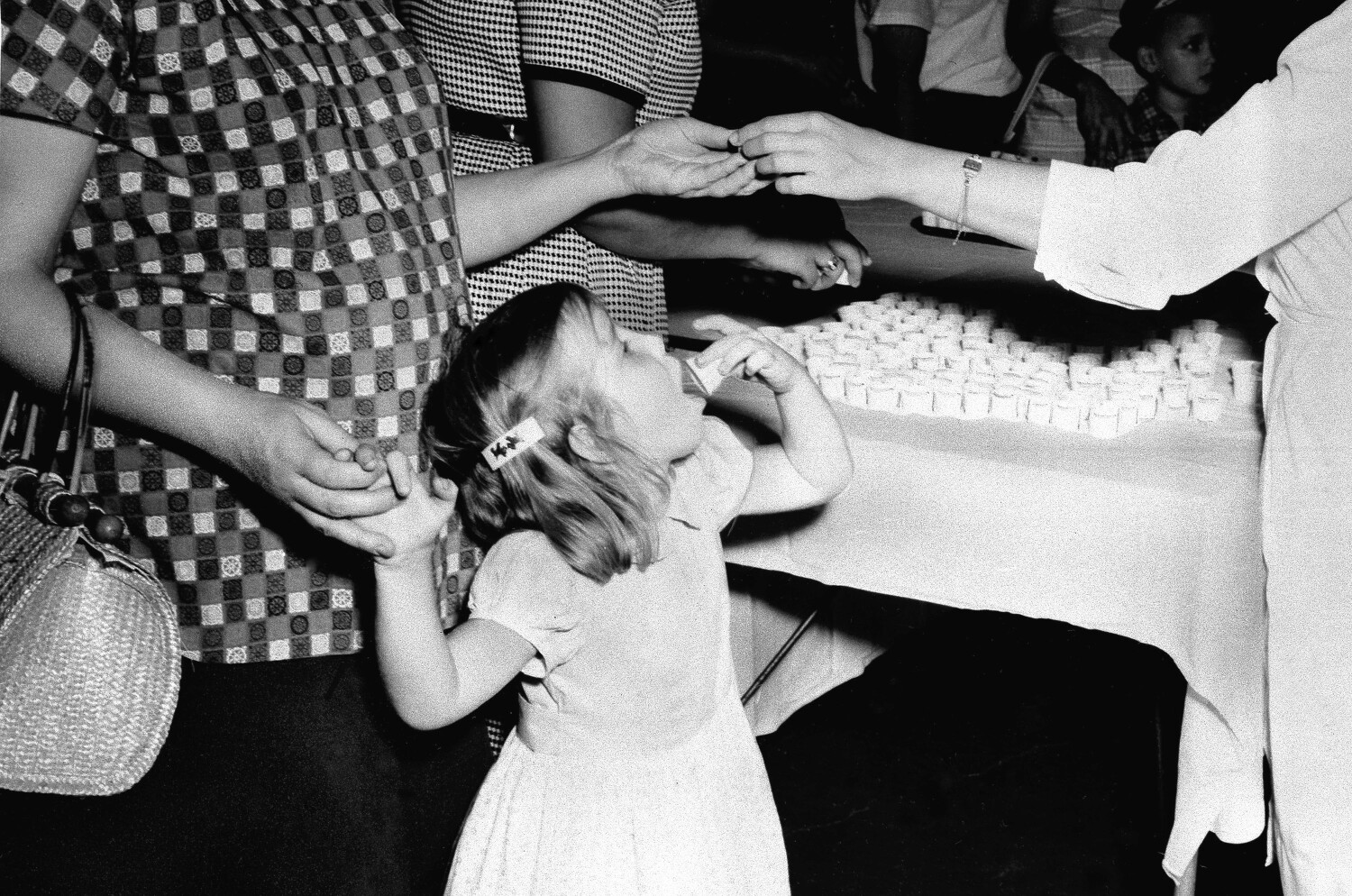 Delays in vaccinating children during the COVID-19 pandemic and anti-vaccination sentiment in general could stoke the most serious polio threat in the US in years, sparking alarms from New York to California.

In recent weeks, health officials in New York identified the first person in the United States to be diagnosed with polio in nearly a decade. The person became paralyzed. Since then, the polio virus has been found in sewage not only in two counties in the area where the patient lives, but also in New York City as of Friday.

The virus could recover worldwide. The Jerusalem area suffered an outbreak this year, and the virus showed up in London sewage in June.

Now health experts and officials in California are voicing their concerns.

Los Angeles County Public Health Director Barbara Ferrer said there are discussions about tracking polio in wastewater, particularly in areas with low vaccination rates. This makes sense, experts said, given the high volume of travelers traveling between Los Angeles and New York and because people can be contagious to polio without having symptoms.

“The detection of poliovirus in sewage samples from New York City is alarming,” said Dr. Mary T. Bassett, the New York State Health Commissioner, in a statement. “For every identified case of paralytic polio, hundreds more may remain undetected.”

Health officials in New York “are treating the individual case of polio as just the tip of the iceberg with a much larger potential spread. As we learn more, what we know will become clear: the threat of polio is present in New York today,” Bassett said.

There is no cure for the paralysis caused by polio, said Dr. Peter Chin-Hong, an infectious disease expert at UC San Francisco. But polio can be prevented with a vaccine that is more than 90% effective. Babies should be given three doses; a fourth is given to children between the ages of 4 and 6.

About 75% of people who contract polio have no symptoms; the others may have flu-like symptoms. It can take three to six days after exposure to the poliovirus for nonparalytic symptoms to appear. Paralysis can occur seven to 21 days after infection.

Paralysis or weakness in the arms or legs may occur in 1 in 1,000 people infected with polio, Chin-Hong said. The disease can cause paralysis because the virus can infect the spinal cord.

Between 2 and 10 in every 100 people infected with polio-induced paralysis die because the virus can damage the muscles that help them breathe.

“Even children who appear to make full recoveries can develop new muscle pain, weakness, or paralysis 15 to 40 years later than adults,” says the US Centers for Disease Control and Prevention. This is called post-polio syndrome.

Chin-Hong said the emergence of polio in New York is worrying enough for doctors to become familiar with the disease.

“We are concerned because this is the first case in the US in almost 10 years,” Chin-Hong said at a city hall recently.

The case of paralytic polio occurred in Rockland County, a suburb north of New York City. Rockland County is characterized by a significant population of Orthodox Jews, among whom there are low vaccination rates.

Outbreaks of infectious diseases have plagued Rockland County before. In late 2018, the county was the epicenter of a significant measles outbreak in Orthodox Jewish communities after it was first detected in an unvaccinated teenager. The seven-month outbreak was the longest in the United States since 2000, according to a CDC report.

In addition, large outbreaks of COVID-19 linked to low vaccination rates have been observed in Orthodox Jewish communities in Rockland County and in Brooklyn.

The polio patient is a 20-year-old unvaccinated man who traveled to Hungary and Poland earlier this year and was hospitalized in June, the Washington Post reported, citing a public health official who spoke on condition of anonymity . The New York Times reported that the patient was a member of the Orthodox Jewish community.

Genetic analysis of a poliovirus sample from the patient indicates it was taken from a person who had received the oral polio vaccine, which has not been used in the US since 2000, health officials said.

The oral vaccine contains a live, weakened poliovirus. “If allowed to circulate long enough in under- or unimmunized populations … the virus can revert to a form that can cause disease and paralysis in other people,” the CDC says.

The oral polio vaccine is used in parts of the world because it is easy to administer in drop form.

Since 2000, the US has only used the inactivated poliovirus vaccine, which cannot cause disease.

After the public announcement of the polio case, officials in New York began examining sewage for signs of virus in stool samples. This month, officials confirmed the presence of poliovirus in sewage samples collected in Rockland County and neighboring Orange County in June and July; They said this was evidence of local transmission of polio.

The sewage samples found in both counties were found to be genetically linked to the index polio case.

“If you are an unvaccinated or incompletely vaccinated adult, please make a decision to have the vaccine now,” said Dr. New York City Department of Health and Mental Hygiene Commissioner Ashwin Vasan in a statement. “Polio is completely preventable and its resurgence should prompt us all to act.”

The outbreak in the Jerusalem area began after an unvaccinated 3-year-old child developed paralysis in February and later publicly revealed he had polio, according to the World Health Organization. The last polio case in Israel was in 1988.

Eight other children have since tested positive for polio, all asymptomatic. According to the Israel Ministry of Health, eight of the nine children in the outbreak were not fully vaccinated for their age group.

According to the Jerusalem Post, Israeli health officials responded to the outbreak – which occurred in Orthodox Jewish areas – with a campaign to encourage parents to educate their children about vaccinations. At the beginning of July, the outbreak was considered under control as no poliovirus was found in sewage in the previous month.

New York, Rockland, and Orange counties have some of the lowest rates of childhood polio vaccination, with only about 60% of 2-year-olds having received three shots. The nationwide polio immunization rate for 2-year-olds is about 79%.

In New York City, approximately 86% of children between the ages of 6 months and 5 years have received three doses. In some Brooklyn boroughs, such as Williamsburg and Bedford-Stuyvesant, vaccination rates are around 60%.

About 80% of the population needs to be vaccinated against polio to prevent the virus from spreading, Chin-Hong said.

The spread of polio could end up being “a phenomenon that we see as community immunization rates drop,” Chin-Hong said.

“I’m really concerned because as we saw in 2015, there were poor vaccination rates in many communities,” he added, referring to the 2014-15 measles outbreak that started in Disneyland and spread across eight states, Canada and Mexico mostly from unvaccinated people. “We know the COVID-19 pandemic has fueled the largest sustained immunization relapse in three decades.”

A study published in October in the journal JAMA Pediatrics found that weekly pediatric immunization rates in eight US health systems were significantly lower during an early phase of the COVID-19 pandemic.

“Interventions are needed to encourage catch-up vaccination,” the report said.

In response to the 2014-15 measles outbreak, California passed legislation barring exemptions from vaccinations, including for polio, among schoolchildren based on a parent’s belief. Medical exemptions are permitted.

Estimating polio immunization coverage in California is difficult, especially among adults. However, available data for school-age children show that government coverage is robust.

Data for younger years are not available. The state Department of Public Health notes that “Routine vaccination rates in California, including the polio vaccine, declined during the early stages of the COVID-19 pandemic.”

“As the new school year approaches, more than 1 in 8 children in California will need to catch up on routine vaccinations missed or delayed during the pandemic,” department officials wrote in a statement to The Times. “Long-standing requirements for school vaccinations and other measures have helped to catch up on the necessary vaccinations.”

As is always the case with a state as large and diverse as California, overall coverage only tells part of the story. In the 2019-20 school year, fewer than 93% of incoming kindergarten children in 10 counties — El Dorado, Glenn, Humboldt, Kern, Mendocino, Mono, Nevada, Santa Cruz, Sutter and Trinity — were vaccinated against polio, state data shows.

In Los Angeles, polio immunization coverage among preschoolers is about 97% “and has not changed appreciably over time,” according to the County Department of Public Health. However, data from the COVID-19 years is not readily accessible.

Ferrer said efforts are underway in LA County to work with pediatricians “to make sure we get kids back on their routine vaccinations.”

“We’re talking about polio today, but … due to the decline in full vaccinations for children during the pandemic, it could be one of several infectious diseases that we really haven’t worried that much about in the past.” ‘ said the health director. “The big pressure now is that again we make sure that families have good information, they have good access.”

‘World of Warcraft: Dragonflight’ won’t use gendered language in its character generator

Great white sharks may have driven megalodon to extinction

‘GoldenEra’ is a loving, if muddled, tribute to ‘GoldenEye 007’