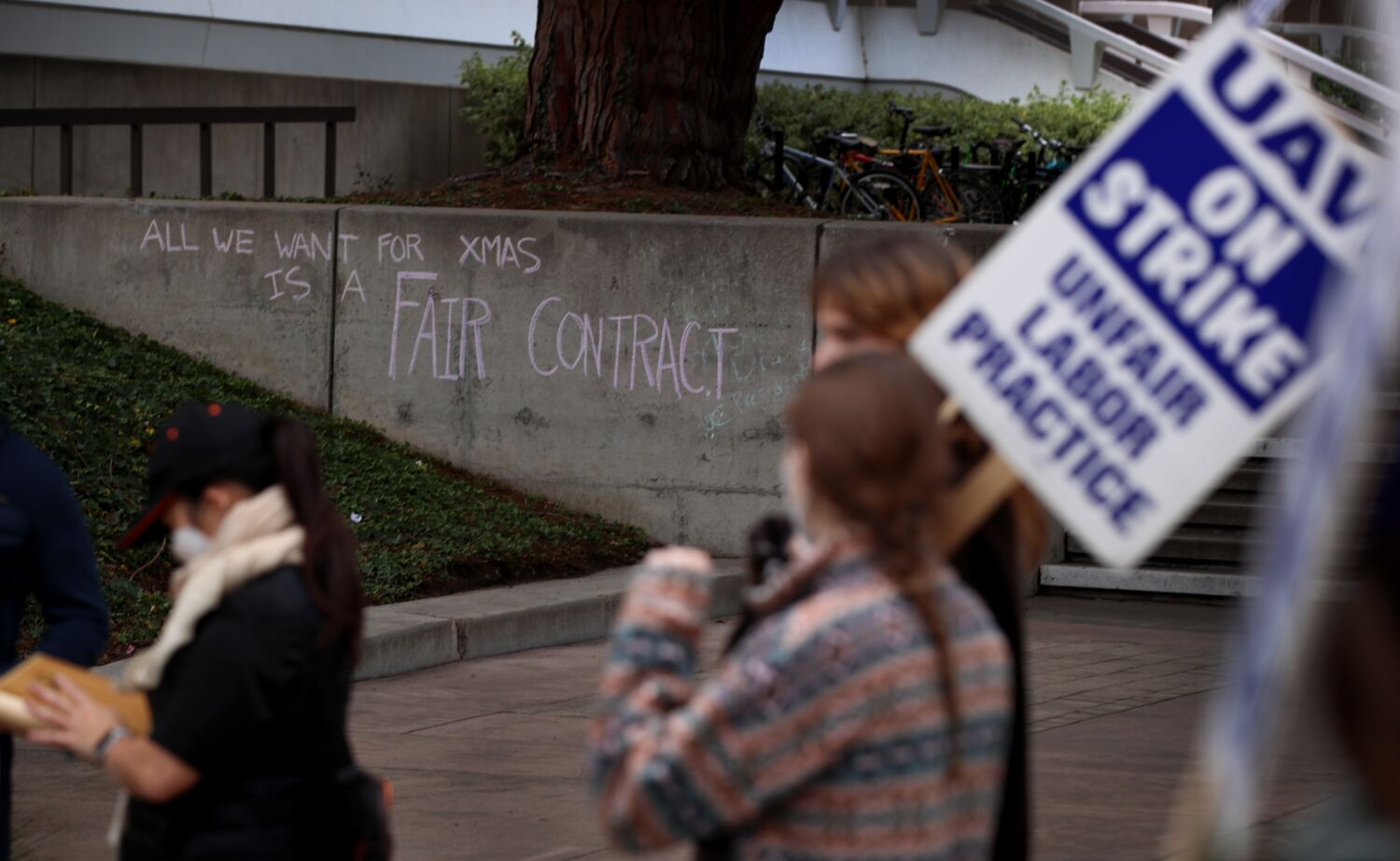 The University of California and the union, which represents tens of thousands of its striking academic workers, agreed Friday to ask an independent mediator to intervene in stalled contract negotiations in hopes of reaching a deal to end the month-long strike that is causing at the 10 campus system.

UC administrators have for weeks urged 36,000 academic staffers represented by the United Auto Workers to enter into voluntary arbitration, in which a neutral party would help the two sides resolve ongoing disputes. Members of the negotiating team voted to go ahead with it, a day after UC administrators told the union they would not make any new proposals during the negotiations, according to union leaders.

The massive strike — the nation’s largest strike by academic college staff — reached a critical juncture during final exams this week as widespread disruption unfolded throughout the system. Exams have been scaled back, study sessions cancelled, papers left unread. Faculty — some honoring the pickets and others unable to handle the burden alone — are holding back at least 34,000 grades across the system.

UC executives said they were pleased that the UAW approved the process. Workers are represented by two UAW bargaining units.

“We remain committed to a fair and equitable contract with the union that recognizes the hard work of our valued student workers,” said Letitia Silas, executive director for system-wide industrial relations. “With the help of a neutral mediator, we hope to reach this agreement quickly.”

Rafael Jaime, president of UAW Local 2865, which represents about 19,000 academic student workers, said that while the unions didn’t want to work with an outside mediator when the strike began, it makes sense now. He said an agreement on compensation and international tuition fees is still a long way off.

“We’ve reached a very difficult time,” Jaime said, noting that it’s time to “use all the tools at our disposal.”

“We will still fight for the issues that matter to our members; that’s going to stay the same,” Jaime said. “But we hope this will help to reach a fair settlement.”

Both sides meet to work out details of the mediation process and must agree on a mediator and timeline. If UC and UAW do not reach an agreement at the end of the process, the parties would return to the negotiating table or seek an impasse where the Public Employee Relations Board would appoint its own mediator.

“Our goal has always been to make UC a fairer place to work,” said Tarini Hardikar, a student researcher at UC Berkeley who is on the negotiation team. “We look forward to working with a professional mediator to resolve the outstanding issues. Until then we remain on strike.”

Harry Bendekgey, who represents UC Irvine student researchers in negotiations, said he voted Friday to move forward with a mediator.

“I think a mediator will be helpful to force serious offers,” says Bendekgey, who is doing his doctorate in the Department of Computer Science.

He knew it had been a tough four weeks for many, but referred to the progress already made in contract negotiations, including paid parental leave and transit allowances. And while a mediator could help with pay discussions, he believes the pressure from the ongoing strike and the strength of their movement will have the biggest impact on compensation.

“The wages we earn in this contract will not be decided by an intermediary … but by the willingness of our workers to go on strike,” Bendekgey said. He and many other strikers on the picket line said Friday they remain committed to the effort, but there are growing concerns about the possibility of the strike extending into the next term.

In a statement, UC said most workers would receive an average three-year raise of 26%, in addition to experience-based increases.

The proposal still falls short of the $43,000 minimum salary for all student workers that the union is seeking, compared to the $54,000 originally proposed.

Jaime said that members do not think UC’s current proposal is sufficient.

“It’s still falling woefully short of what members actually need to address the cost-of-living crisis we’re all experiencing,” Jaime said. “We’d like to see more movement from them to us.”

Deryn LeDuke, a graduate student in biomedical sciences at UC San Diego, said she visited a city hall early Friday about the mediation option and is glad the union agreed to involve a third party.

She said she believes an umpire will help steer UC in a fairer direction, and sooner. She feared that being forced to mediate after a dead end, meaning she spends more time outside of the experiments she runs as a full-time researcher, could cause further delays.

The mice she’s using in behavioral neuroscience experiments have already outgrown their best study window, meaning the results she hoped for in January will likely not be complete until May. She will likely have to start over with a new cohort of mice.

Despite the time off from her job, she remains committed to the strike.

Voting on the preliminary pact is expected to end on Friday evening. If approved, the agreement would increase the annual minimum salary for their full-time positions from about $55,000 to $70,000 or more with various adjustments through the end of the five-year contract — including a $12,000 increase through next October, making them the highest-paid such academic staffers in the country.