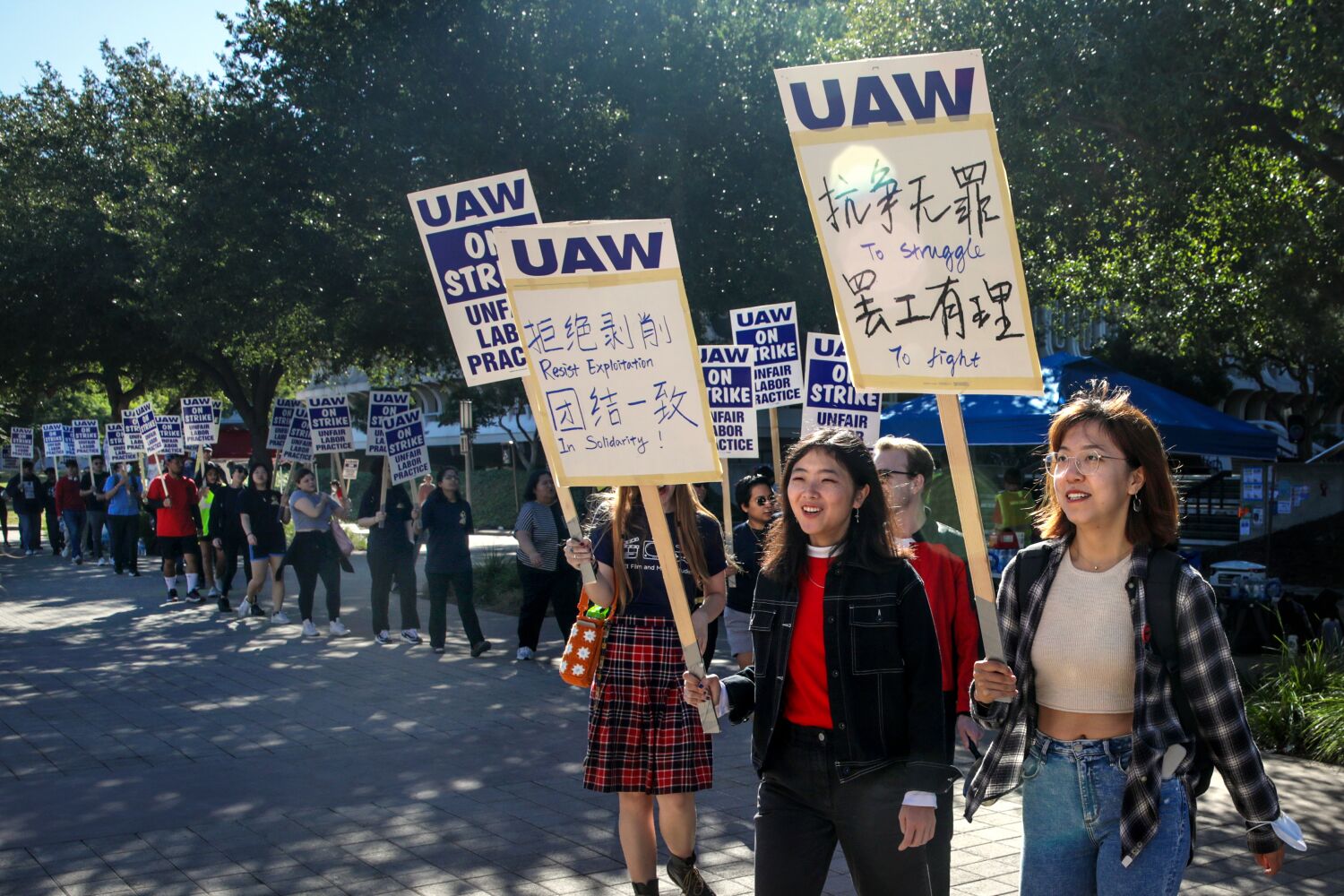 For graduate student and single parent Konysha Wade, the financial struggle is commonplace.

More than half of her monthly income from her two jobs on campus at UC Irvine goes towards renting the college apartment where she lives with her 11-year-old son.

She brings home about $2,700 after taxes a month working as an African American Studies lecturer and research student—all while taking at least two courses for her PhD in Culture and Theory and raising her son. She said her rent is more than $1,500 a month, which leaves just over $1,000 a month for all other expenses.

“It’s so, so hard,” said Wade, 29. “We’re barely making it. We try to survive with limited savings. It’s about constant budgeting.”

Wade is one of 48,000 UC academic staff — including postdoctoral students, graduate teaching assistants and researchers — who quit this week in what is being described as the largest at an academic institution in history.

The walkout aims to challenge long-held labor practices at UC and other universities across the country, which have come under increasing scrutiny for how college graduates and academic staff are paid at a time of rising inflation and growing union activism.

These staff perform much of the teaching, grading, and research at the state’s most prestigious public university system.

In a way, the strike underscores the growing economic strains faced by low-wage workers, particularly in places like California where the cost of living is high.

“People are already facing high rents and are struggling to make ends meet with the way they are paid,” said Paula Voos, a professor at Rutgers School of Management and Labor Relations. “This is a time when there is a lot of organizing and a lot of strikes, especially by younger, lower paid workers who have been turning it on its head for a while.”

A significant increase in academic staff compensation would definitely change the budgets of large universities like UC, where high tuition fees are already a major problem.

But strikers argue that California has an opportunity to deal with economic inequality — and set a better example for other universities.

“The university prides itself on its world-class research, but that doesn’t show in the paychecks they give us,” said Edward Mendez, a graduate student at UC Irvine. “We don’t make enough to live in the cities where these schools are.”

Union leaders are demanding big pay rises for graduates, noting that housing costs on and near many UC campuses have continued to rise, leaving the majority of their members “rent-burdened,” or spending more than 30% of their income on rent.

They want all graduate student workers — who are teaching assistants and tutors — to earn a base salary of $54,000, more than double the current average salary for those workers of about $24,000, the union said. For postdocs, the union has called for a minimum salary of $70,000, which would average a $10,000 increase, said Rafael Jaime, a UCLA graduate student and president of United Auto Workers Local 2865, which represents 19,000 teaching assistants and tutors and other academic staff on strike

UAW surveys found that 92% of college graduates and 61% of postdocs are rent-burdened.

“We need help,” Wade said as she joined her colleagues and other academic staff at the picket line for the second straight day. “We do work that aims to contribute to society at large – to liberate and to enlighten.”

UC officials have offered a pay rise of 7% the first year for certain student workers and 3% for each year thereafter – an offer union leaders say falls short.

Ryan King, a systems spokesman for the University of California, said UC believes its current offerings are adequate. He found that most of these graduates work part-time while earning a college degree.

“Compensation is just one of the many ways students are supported during their time at university,” King said.

But for Safa Hamzeh, an international sophomore in UCLA’s history department, that base salary is far from enough.

She said she makes about $24,000 annually as a teaching assistant and lives in an apartment in the Palms provided by UC Housing, paying $2,000 a month shared with a roommate. Because of her visa, she said she couldn’t take any extra work.

To pay for groceries, she applied to CalFresh, known nationally as the Supplemental Nutrition Assistance Program, for $100 to buy groceries at Kroger stores with her roommate. But even that wasn’t enough to cover rising food prices due to inflation, she said.

“I’ve watched as food prices have continued to rise,” she said. “And that’s one thing you have to do every week.”

Hamzeh was on the picket line at UCLA on Tuesday, specifically urging the university to scrap the $15,000 tuition that college graduates like her often face — though she has a scholarship covering her at the moment.

“This is the most powerful tool we have against the government,” said Hamzeh, 26. “When we strike, we don’t grade, we don’t visit sections, we don’t attend lectures, we don’t hold office hours. When that happens, all educational progress stops. … When we go on strike you see that we do most of the work because all the work stops.”

UCI’s Mendez said he could not join the picket line on Tuesday – despite his interest – because of his newborn baby’s sleep schedule. The first-generation college student, who is working on his doctorate in visual studies at UC Irvine, said he and his wife have dabbled in using campus childcare, but they could afford the $2,000 monthly fee can’t afford — something unionized workers would like to see reimbursed for graduates and academic workers like Mendez.

“I want to make sure that people don’t have to sacrifice their lives to go to grad school — and to pursue the career path that they want,” said Mendez, 30. He pointed to UC’s massive budget, which he believes does not correlate with the low payments to workers like him. He said while he’s working on his dissertation, he’s teaching an introductory English course and earning about $25,000 for nine months of classroom tuition, prep work, answering emails, office hours and grading.

He said both he and his wife complement their day-to-day jobs — for him, helping edit the film section of a New York-based magazine, and for her, entering the gig economy and fulfilling Instacart orders.

Jaime said it’s not uncommon to hear from students and other academic staff struggling to make ends meet and trying to find extra jobs even though they’re already overworked. He said it was particularly painful to see the UC chancellors receiving six-figure pay rises earlier this year, which the Board of Regents said should provide “fair and competitive” remuneration – something Jaime has not seen elsewhere.

“When it comes to graduate students and postdocs, for some reason that doesn’t translate to them,” Jaime said. “We’ve seen a pattern over the years as public universities have become more privatized and the value that academics and researchers bring has become increasingly undervalued.”

https://www.latimes.com/california/story/2022-11-16/behind-uc-strike-a-push-to-change-a-way-of-life-for-academic-aides UC workers say they are struggling to survive in California. Will strike bring change?

Elon Musk's ultimatum for Twitter staff: Leave or be hardcore