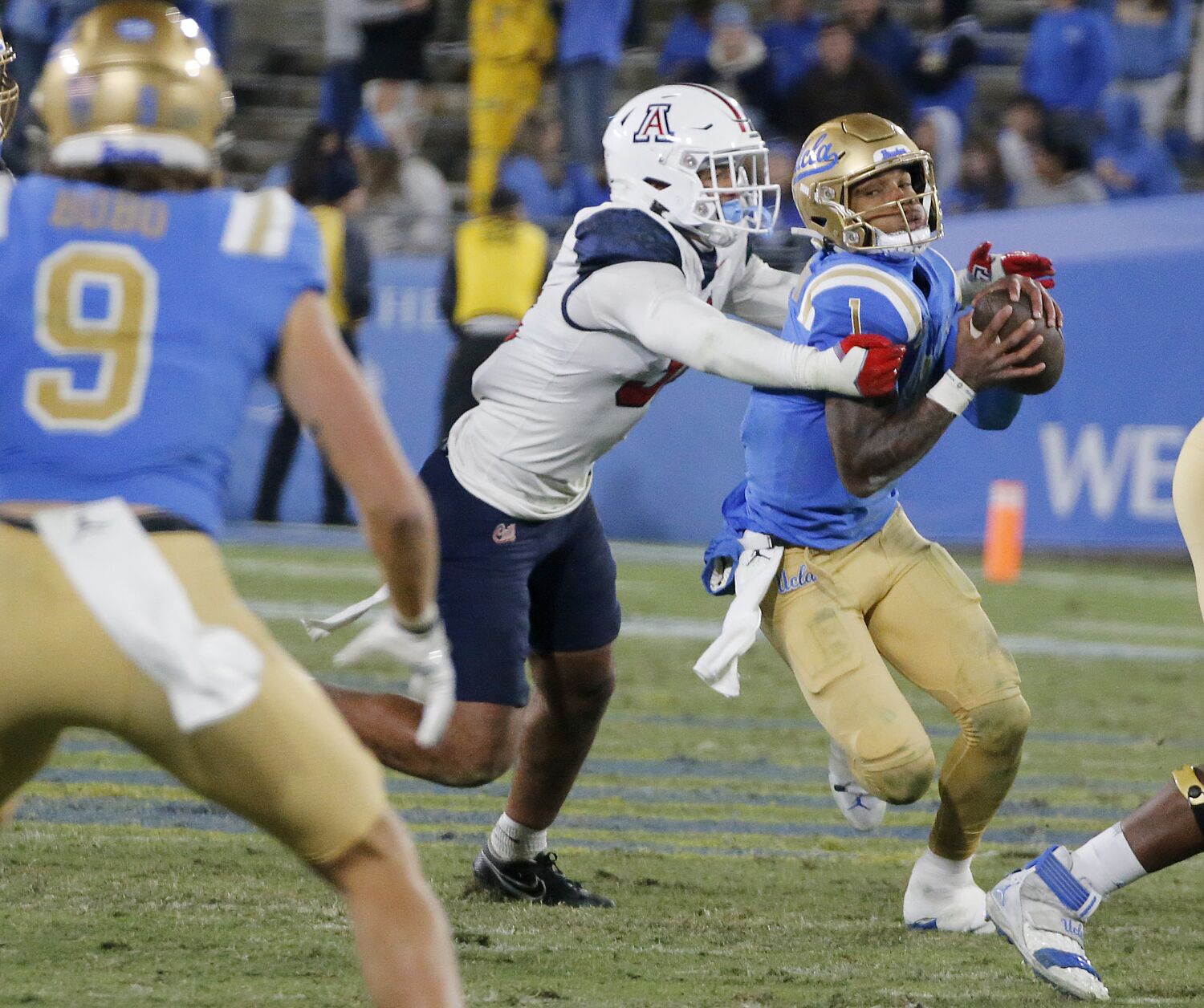 It would have been exciting to see Los Angeles as the beating heart of a college football Saturday, with UCLA and USC playing as top-10 teams for the first time since Troy Aikman and Rodney Peete quartered their respective varsities.

The thrill is over after UCLA’s shocking 34-28 loss to Arizona in the Rose Bowl on Saturday night.

Put simply: what a choke.

Ironically, the Bruins could no longer have acted like a Pac-12 football team that suddenly had legitimate college football ambitions, as UCLA administrators prayed for the University of California Regents, who are meeting Wednesday, to have them without real punishment to let the big ten go game start.

What’s more Pac-12 than losing a home game to a 3-6 team (now 4-6! Bear Down, Wildcats!) just as a clear path to national relevance was opening up?

Somehow, by mid-November, it was all clear to UCLA whether the Bruins were actually playoff good or not. Hold serve against Arizona, win the biggest crosstown rivalry game in recent memory against a beatable USC roster, hold serve against the jilted Berkeley troops, and then play the game of a lifetime against Oregon in the Pac-12 title game or Utah.

The Nov. 5 upsets — Clemson and Alabama, the most dominant programs of the past decade, both fell out of reasonable playoff contention — paved the way for a one-loss Pac-12 champion to make the field.

UCLA wasn’t the only one to exhibit extreme Pac-12 behavior on Saturday night. At least Oregon, who snapped a No. 6 in the CFP rankings in their devastating 37-34 loss to No. 25 Washington at a dour Autzen Stadium, is actually a card-carrying Pac-12 member living up to their annual role, the hopes at the conference to strengthen headquarters, only to lose a head scratch in November.

An entire column could be written about the obvious mistakes Duck’s first-year head coach, Dan Lanning, made to cost his team the win.

With Oregon and UCLA knocked out of the playoffs by two losses, only one Pac-12 team determines its own destiny to become the first league team to earn a CFP invitation since 2016: Lincoln Riley’s USC Trojans.

Can they even do that? After Saturday, beating UCLA, Notre Dame (who walked away with a 35-32 win over Navy) and Oregon in the Pac-12 title game over the next three weeks seems more realistic. It could be Utah awaiting the conference title at USC in Las Vegas, and anyone who watched the Utes’ 43-42 win over the Trojans in Salt Lake City knows USC should win a rematch.

It’s sad just to talk about USC’s hopes for a magical run to the sport’s national championship event. UCLA ruined LA’s return to the big stage — aside from literally playing this year’s CFP championship game on Jan. 9 at SoFi Stadium.

But maybe UCLA’s loss to Arizona is just what we needed. Maybe we all – myself included – had to stop living in dreamland.

UCLA isn’t there yet, and the Bruins could give USC the same reality shock next weekend. We know the Trojans are flawed, but there’s far more empathy for their imperfections in Riley in his first season than there is in Chip Kelly in his fifth.

A terrific setup for next weekend’s crosstown rivalry would have masked the flaws in Kelly’s program. The Bruins haven’t had a reliable defense since UCLA brought him to campus, and they still haven’t.

Kelly admitted as much to revelers watching late Saturday in the fourth quarter when he decided to give it a shot in fourth and sixth from his own 36-yard line when he shot more than 5 minutes from the end at 31 -28 behind. Kelly knew his defense wouldn’t stop Arizona quarterback Jayden de Laura, so he might as well trust his five-year senior quarterback Dorian Thompson-Robinson to win the game for his team.

That strategy paid off – the Bruins defense made a miracle stop to hold the Wildcats to a field goal after the offense didn’t convert and set Thompson-Robinson up for a potential game win with a minute left. But Kelly’s decision revealed a deeper truth that UCLA fans will grapple with next season and beyond.

The Bruins don’t have a viable defensive plan — in recruitment or on schedule — and Eight Clappers everywhere should be terrified at the prospect of what happens next year when Thompson-Robinson and All-America-caliber backwater Zach Charbonnet have left Westwood for the NFL .

The offense also deserves some of the blame. The Bruins should have been able to put up 35 points against a pathetic Arizona defense. The amazing Thompson-Robinson kept trying to put on his cape, but this time he couldn’t lift this program out of mediocrity. On the last play of the game, he missed an open Jake Bobo in the back of the end zone – a result that didn’t befit the DTR player.

He should make that pitch and get us to Saturday with our delusions about two top 10 collegiate football teams living in our midst.

The Bruins woke us up, and now their entire season will boil down to making USC and its fans feel the same misery.

Op-Ed: Is there something about Americans that makes us football addicts?