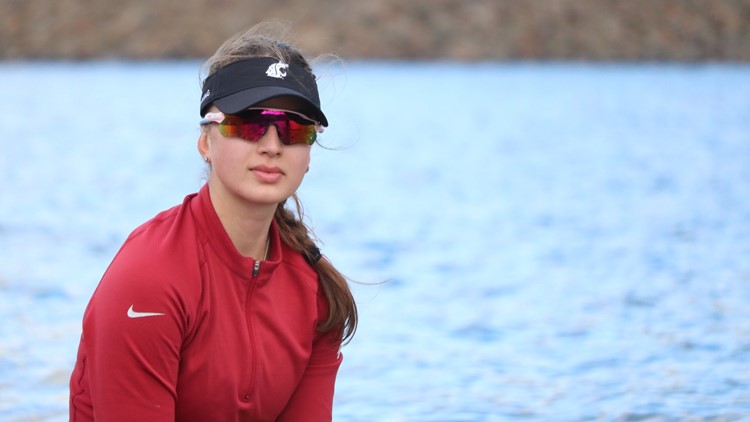 Former Washington State rower Kate Maistrenko has found a second home, not by choice but by necessity.

22-year-old Kate Maistrenko is one of the best rowers in the world.

In fact, the former Washington State standout is now training for the Olympics and World Championships.

Every morning when the sun comes up, Maistrenko drives to Lake Washington to carve a trail.

However, as fast as she goes, her boat is still against a current – all because of current events on the other side of the world.

“People die. My people are dying,” she said.

She was born and raised in Kyiv, the capital of Ukraine.

“The family district where I grew up, that’s basically where all the bombs were. I thought, ‘Oh. I went to school here.

Maistrenko’s family is still in Ukraine and has lost almost everything.

“You wake up thinking that you might never see her again. It was a bit difficult for me to accept her decision. I didn’t understand why they weren’t able to maybe go to Poland. I started realizing a few days later they were never going to leave. This is her home. They have to protect their homes,” she said.

Her brothers are directly involved in the battle.

“He’s helping out as a volunteer. It’s like he probably needs some help,” Maistrenko said, fighting back tears.

Her mother helps him run her rowing school.

Both of Maistrenko’s parents are former Olympians. She wants to follow in their footsteps and at the same time go her own way.

“In Ukraine everyone knows my parents and everyone treats me like I’m someone’s daughter. I don’t want to be anyone’s daughter,” she said.

This is how Maistrenko landed in Washington state five years ago.

That’s why she wants to stay in Washington State.

“If I don’t find a job in three months, see you later, I’ll be deported,” Maistrenko said, referring to her struggle to fulfill her visa now. “I can’t work if it doesn’t match my specialty and course.”

She is looking for an immigration-friendly job in her adopted country while rowing to represent her home country.

“The fact that she’s currently training to hopefully go to the World Championships, to hopefully race in one of these national team boats for Ukraine, we want to go with her on this journey,” said Rachel Kehler, trainer at the Pocock Rowing Center.

Kehler works hand in hand with Maistrenko’s national coach in Ukraine to develop the best training plan for her.

“Do I think I’m the most competent coach out there who should coach a rower from the Ukraine national team? Probably not. But I can take her there,” said Kehler.

Kehler, who is from Everett, also rowed collegially at the University of Tennessee.

“We will put her in contact with many people who want to help her succeed. To me, this is the community she needs to be a part of,” she said.

“Could be worse. I could row under the fire,” Maistrenko said.

So while Maistrenko has found a temporary training home, her thoughts are still on her real home.

“It’s all about being in the national team. She wants to represent Ukraine,” said Kehler.

Maistrenko continues to raise funds for displaced Ukrainian national team athletes and others affected by the war. She said she has raised over $800,000 so far.

“Living in Seattle is incredibly expensive and even if you have the best job I can’t afford to live in a secure building because I have to help around the house,” she said.

It is a duty to row against the current.

“There’s something more than just myself,” she said. “What can I do to make this world a better place?”

Vin Scully’s voice, a serenade of rebirth, to live on in L.A.