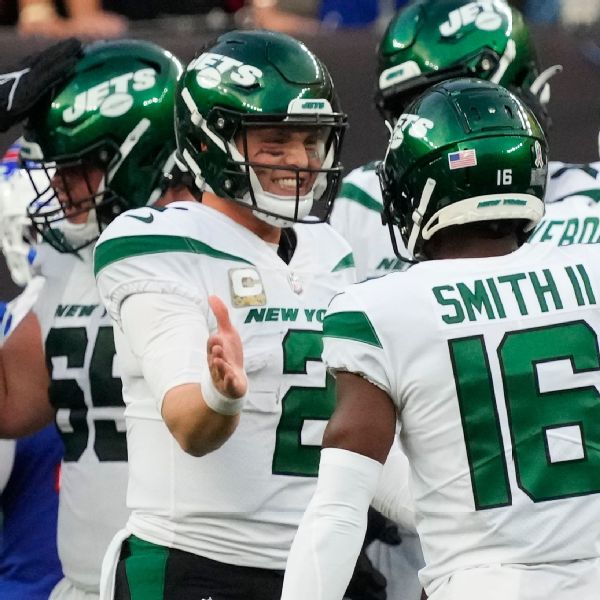 EAST RUTHERFORD, NJ — The New York Jets overcame a slow start, a double-digit deficit and a bizarre sky-cam lag to record their biggest win in seven years: a 20-17 sentiment against the Buffalo Bills on Sunday at MetLife Stadium .

The Jets continued their unlikely season with a dominating display on defense (five sacks and two interceptions) and a bounce back play from quarterback Zach Wilson, making a loud statement to their many doubters.

“Everyone outside of that locker room didn’t think we had a chance, but for us it’s been the same story all season,” said tight end Tyler Conklin. “Everyone kind of thinks it’s going to be the Same Old Jets, right? Last week it was, ‘Oh, the Same Old Jets.’ …You know what? We’re not the same old jets.”

The Jets went out as a 10.5-point underdog, making them the biggest home underdog with a winning record since 2007. As if on cue, they fell back 14-3 on two touchdown runs from Bill’s quarterback Josh Allen. Their hopes were dashed after a fumble in the red zone by Wilson in the third quarter, ruining a possible shot on goal that was cut short by an unusual delay.

The game was suspended for 11 minutes due to a broken cable on the CBS Skycam, which dropped it near field level. When asked what he was thinking during the delay, Jets coach Robert Saleh said, “That only happens to the Jets.”

When play resumed, the Jets made a false start. Then, two games later, Wilson coughed it up on a sack from Von Miller.

As it turned out, the sky cam fell on the jets, but the sky didn’t. Moments later, rookie cornerback Sauce Gardner intercepted the Bills 19 and set up Wilson’s 7-yard touchdown pass to run back James Robinson to give the Jets a 17-14 lead.

After the Bills leveled it out, the Jets turned to their ground game, rushing 10 of 12 games on an 86-yard drive that culminated with a 28-yard field goal by Greg Zuerlein at 1:43 in the fourth quarter. They finished with 174 rushing yards, including a 6-yard touchdown by Michael Carter. The defense, with a sack from Bryce Huff on last possession, slammed the door to victory.

“I know a lot of people will be surprised, right?” Said Saleh. “I don’t think anyone was caught off guard in the dressing room.”

The Jets have won three games after falling double digits compared to 4-30 in the previous four seasons. Under Saleh, they are 5-14 in those situations after going 0-20 under Adam Gase in two seasons.

“We’re not flinching,” Saleh said. “We’re too young to flinch.”

The pregame focus was so much on defense for the Bills, who ranked first in points allowed and second in yards allowed. The Jets took it personally and wanted to prove their defense was up to par.

They did. They rarely blitzed and used their four-man rush to put Allen (18-for-34, 205 yards) into one of his worst plays. Wide receiver Stefon Diggs, who had five catches for 93 yards in the first half, was faded in the last two quarters: no catches, three targets.

“If we’re not No. 1, the goal is to be No. 1,” defensive end John Franklin-Myers said of the Jets’ defense. “We will keep playing and keep dominating the teams and hopefully it will work out.”

Perhaps the most encouraging development was Wilson (18-for-25, 154 yards), who set a career-high completion rate (72%). He came under intense scrutiny after last week’s three-interception disaster in a 22-17 loss to the New England Patriots, but managed the game well and only had one turnover.

“I don’t care what anyone says,” Wilson said. “Of course I dealt with it [criticism] My whole life. But it’s a huge team win.”

Grizzlies, other NBA teams speak out on Tyre Nichols’ death

EXPLAINER: What Griner may endure in Russian penal system