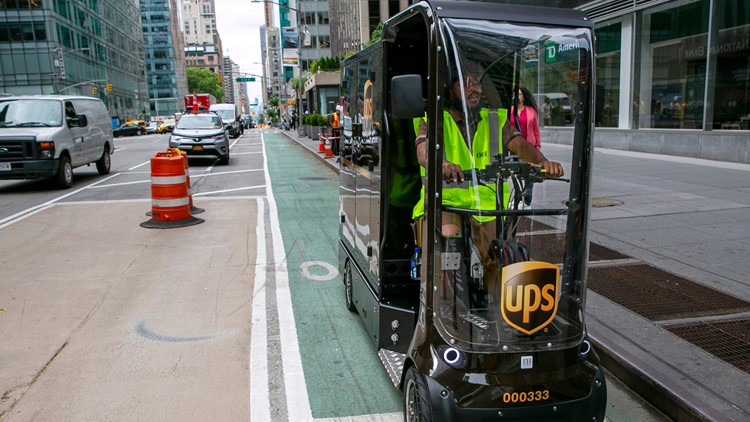 If the trial goes well, UPS will consider shipping the little carts to other cities.

NEW YORK – The sleek four-wheeled carts sound familiar enough, but even UPS doesn’t quite know how to describe the delivery giant’s latest way of delivering packages to your door.

UPS on Tuesday unveiled a battery-powered, four-wheeled bicycle to move freight more efficiently on some of the world’s most congested roads and reduce its carbon footprint. The company aims to be carbon neutral by 2050.

The slimmed-down vehicles bear the gold-colored company logo and the associated stripes on a dark brown background. But the “eQuad” – as the company calls it – caused amusement among passers-by.

Ian Lagowitz had never seen one and went over to check it out.

“It looks weird,” he said, “but it’s probably good for the city, right?”

Mohammad Islam called the vehicle “cool stuff” and wished the show all the best.

“Big trucks are always blocking traffic,” he said, “so if they do something like that, it’s ten times better for everyone.”

The pedal-powered vehicle has been dwarfed by one of the company’s more traditional vans, which rumble through traffic and sometimes draw the wrath of motorists trying to get past parked trucks on narrow streets.

Delivery companies have tried all sorts of ways to deliver packages, from traditional vans to drones. The company now has a fleet of more than 1,000 electric vehicles and thousands more that are not powered by traditional gas engines.

According to UPS, a test run will focus on New York City and several cities in Europe.

“New York is a complicated city when we look at density,” said Nicole Pilet, industrial engineering director at UPS. “So if we find success here in the city, we can see how we do it in other cities across the US.”

The company was founded in Seattle more than a century ago and the first deliveries were made by foot or bicycle. As the company grew, so did its motorized fleet.

“It’s right in my wheelhouse,” said Dyghton Anderson, a 22-year-old UPS delivery man and avid cyclist who is helping pilot the program. “I commute to and from work — from the Bronx to here on the 43rd — so it’s pretty convenient for me.”

Suspect in Burlington attack before LAPD shooting on meth

Massacre as Usual in Chicago

Patty Guggenheim makes her premiere in the MCU