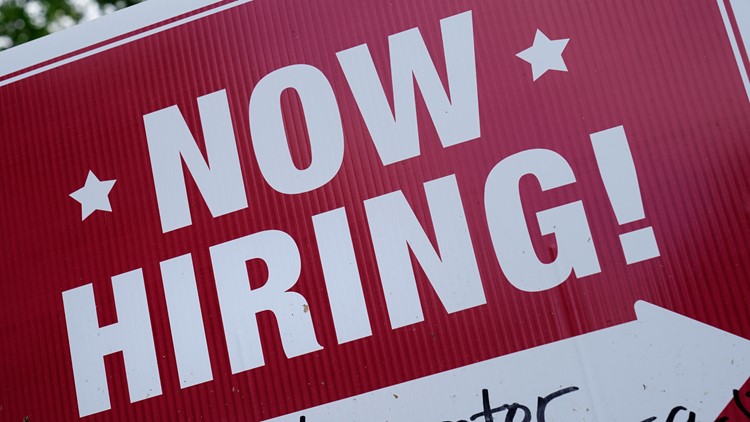 In an attempt to combat the worst inflation in 40 years, the Fed quickly raised its key short-term interest rate to a range of 3% to 3.25%.

WASHINGTON – The number of available jobs in the US fell sharply in August from July as businesses became less desperate for workers, a trend that could blunt chronically high inflation.

That’s good news for the Federal Reserve in its efforts to lower prices high without pushing the economy into recession. The government jobs report released on Tuesday also showed layoffs remained at historic lows, even after a modest increase in August. And overall hiring was essentially flat that month.

Overall, the data shows that even when companies remove job postings, they are not cutting jobs or slowing down in adding jobs.

The government said on Tuesday there were 10.1 million jobs advertised on the last day of August, down 10% from 11.2 million in July. In March, the number of jobs reached a record level of nearly 11.9 million.

The report pushed major US markets higher as it was a potential sign the Fed could slow its rapid rate hikes, although most economists say more is needed. more than one report to change the trajectory of the Fed. The US releases important monthly employment data on Friday.

The job opening report follows news that Australia’s central bank made a smaller rate hike than the previous one, a rare sign of moderation as central banks around the world quickly raise interest rates to counter rising prices.

In an attempt to combat the worst inflation in 40 years, the Fed briefly raised its key short-term interest rate to between 3% and 3.25%, up sharply from near zero in March.

Federal Reserve officials are hoping to reduce demand for workers by raising interest rates, which drive up the cost of mortgages, auto loans and borrowing for businesses. While workers generally welcome larger increases, the Fed considers the current rate of wage growth – about 6.5% a year, by some measures – to be unsustainably high and a key driver of inflation. .

Chairman Jerome Powell and other Fed officials hope that their rate hikes – the fastest in about four decades – will slow employers’ efforts to hire more people. Fewer jobs reduce pressure on companies to raise wages to attract and keep workers. Smaller wage increases, if sustained, could ease inflationary pressures.

“This helps ease inflationary pressures and reassures the Fed that there may be a way out of this without increasing the unemployment rate,” said Derek Tang, economist at LHMeyer, an economic research firm. significantly”.

Powell has warned that a central bank rate hike will likely lead to higher unemployment and a potential recession. Still, he and other Fed officials hold out hopes of what they call a “soft landing” – in which the economy slows down enough to contain inflation but not too much to trigger a recession.

Christopher Waller, a member of the central bank’s Board of Governors, has argued that a Fed rate hike could reduce job openings and thus inflationary pressures without causing job losses across the board. widespread. But former Treasury Secretary Larry Summers and former IMF chief economist Olivier Blanchard wrote that such an outcome is unlikely, based on past trends. They found that when job openings fall, layoffs and unemployment typically increase.

However, for now, businesses are still hiring. Tuesday’s figures come the same week that a key jobs and unemployment rate report is due on Friday. Economists forecast that employers added 250,000 jobs in September and the unemployment rate remained at 3.7% for a second straight month.

The level of job search and the number of people leaving jobs have decreased in recent months, which shows that the job market is cooling. Most people leave their jobs to find another job, usually a higher paying job. About 4.2 million people quit their jobs in August, still at an all-time high, but down from a record high of 4.5 million in November last year.

Last week, San Francisco Fed President Mary Daly said the drop in opening and exit rates were “early signs that the labor market is loosening.” But she added that the Fed still needs to see concrete evidence that inflation is falling before it goes back to raising rates.

What Happened With Ned From The Try Guys? What Did He Do? Cheating Scandal

Trump gears up for 2024 presidential bid