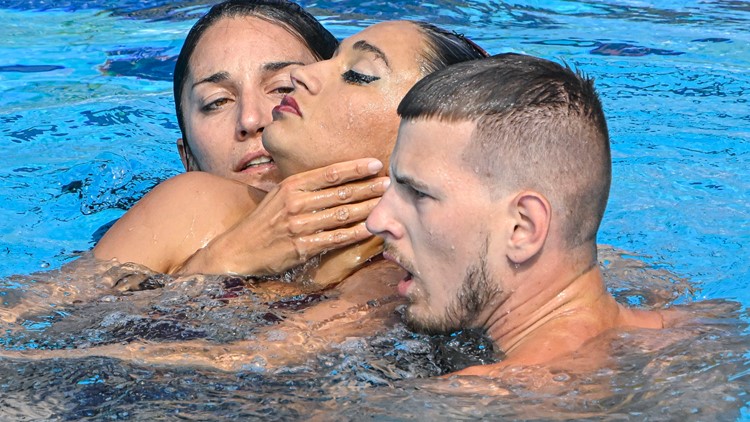 The US coach knew something was wrong when she saw swimmer Anita Alvarez sink motionless to the bottom of the pool.

BUDAPEST, Hungary – Only her quick reaction averted tragedy as Andrea Fuentes made a dramatic save.

The United States coach knew something was wrong when she saw competitive swimmer Anita Alvarez sink motionless to the bottom of the pool during a solo free practice session at the World Aquatics Championships on Wednesday.

Fully clothed Fuentes dove. She swam to the unresponsive Alvarez, wrapped her arms around her and lifted her to the surface of the water, where another person helped her get her out of the pool.

Alvarez, a two-time Olympian, had passed out.

“It was her best performance ever, she just pushed her limits and she found them,” Fuentes joked.

She received immediate medical attention. On Thursday she felt much better.

It wasn’t the first time something like this had happened. Ahead of the Tokyo Olympics, Alvarez lost consciousness during the qualifying rounds and Fuentes dived to save her then as well.

An incredible photo by the AFP photographer @oliscarff shows the artistic swimmer Anita Alvarez, who is rescued by her trainer Andrea Fuentes after fainting #FINABudapest2022.

“Anita has been examined by medical staff and will continue to be monitored. She is feeling much better and is using today to rest,” USA Artistic Swimming told The Associated Press in a statement.

“Anita is fine,” Karen Alvarez, Anita’s mother, told WGRZ. “We are grateful that she has a great coach who saved her again. It’s an intense sport and Anita is one who always pushes her limits. Unfortunately, she ends up collapsing in the water, requiring a rescue.”

“Yesterday’s medical emergency of two-time Olympian Anita Alvarez and subsequent rescue by coach Andrea Fuentes was heartbreaking for our community. She put in an exceptional solo performance and competed brilliantly in four preliminary and three final competitions over six days.”

“Whether or not she will swim in Friday’s free team final… will be decided by Anita and medical professionals,” USA Artistic Swimming said.

“Doctors have checked all vital signs and everything is normal: heart rate, oxygen, sugar levels, blood pressure, etc … everything is fine,” Fuentes wrote. “Sometimes we forget that this also happens in other high-performance sports. Marathon, cycling, cross country… we’ve all seen images where some athletes don’t make it to the finish line and others help them get there. Our sport is no different than others, only in the pool do we push our limits and sometimes we find them.”

The Best Shoe Deals Will Upgrade Your Wardrobe for Cheap: Nike, Adidas, Vans, and More

What is Tom Brady’s record against the Cowboys? NFL GOAT to mark return on first SNF of 2022 season

Jamaal Williams will run over opponents while crying, plus more quotes of the week