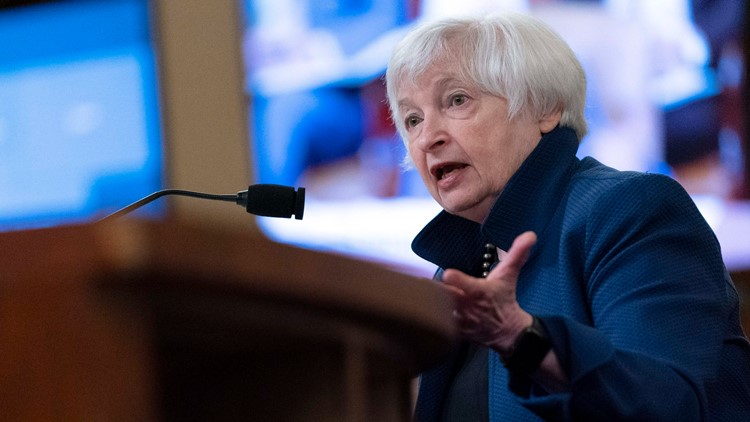 Treasury Secretary Janet Yellen says US economy is slowing but cited healthy attitude as evidence it is not yet in recession.

WASHINGTON – Treasury Secretary Janet Yellen said Sunday the US economy is slowing but pointed to a healthy attitude as evidence it is not yet in a recession.

Yellen spoke on NBC’s Meet the Press ahead of a series of economic reports released this week that will shed light on an economy currently beset by runaway inflation and threatened by higher interest rates. The data includes new home sales, consumer confidence, income, spending, inflation and total production.

The most prominent report is likely to come out on Thursday, when the Commerce Department will release its first estimate of economic output for the April-June quarter. Some economists are forecasting a second consecutive quarter of contraction. The economy contracted 1.6% in the January-March quarter. Two straight negative readings are considered the informal definition of a recession, although in this case economists think it’s misleading.

Instead, the National Bureau of Economic Research — a nonprofit group of economists — defines a recession as “a significant decline in economic activity that spreads across the economy and lasts longer than a few months.”

Yellen argued that much of the economy remains healthy: Consumer spending is rising, Americans’ finances, on average, are sound, and the economy has added more than 400,000 jobs monthly this year, a robust number. The unemployment rate is 3.6%, low for almost half a century.

“We have a very strong job market,” Yellen said. “This is not an economy in recession.”

Nonetheless, Yellen acknowledged that the economy is “in a transition phase where growth is slowing” from a historically fast pace in 2021.

She said a slowdown was “necessary and appropriate” because “we need to grow at a steady and sustainable pace.”

Slower growth could help bring down inflation, which at 9.1% is the highest in two generations.

Still, many economists believe a recession is on the horizon as inflation saps Americans’ ability to spend and the Federal Reserve drives up borrowing costs rapidly. Last week, Bank of America economists were the latest to forecast a “mild recession” later this year.

And Larry Summers, Treasury Secretary under President Bill Clinton, told CNN’s GPS on Sunday that “there is a very high probability of a recession” as the Fed hikes interest rates to fight inflation. These higher borrowing costs are expected to reduce consumer spending on homes and autos and slow corporate borrowing, which could lead to a downturn.

On Wednesday, the US Federal Reserve is likely to announce its second consecutive 0.75 percentage point hike in its short-term interest rate, a sharp hike not seen since 1994. That will put the Fed’s interest rate in a range of 2.25% to 2.5%, the highest level since 2018. Fed policymakers are expected to keep climbing until the rate reaches around 3.5% , which would be the highest level since 2008.

The Fed’s rate hikes have torpedoed the housing market as mortgage rates have doubled to 5.5% over the past year. Existing home sales have declined for five straight months. On Tuesday, the government is expected to report that new home sales fell in June.

Many other countries are also grappling with higher inflation, and slower overseas growth could weaken the US economy. Europe faces the threat of a recession, with rising inflation and a central bank that just last week hiked interest rates for the first time in 11 years.

“In the base case, there is no recession either this year or next,” Lagarde said. “Is the horizon cloudy? Of course he is.”

https://www.king5.com/article/news/nation-world/us-treasury-secretary-downplays-us-recession-risk-as-economic-reports-looms/507-7e13ce11-266f-40a4-b872-6173ed09dcdf US Treasury Secretary argues economy is not yet in a recession