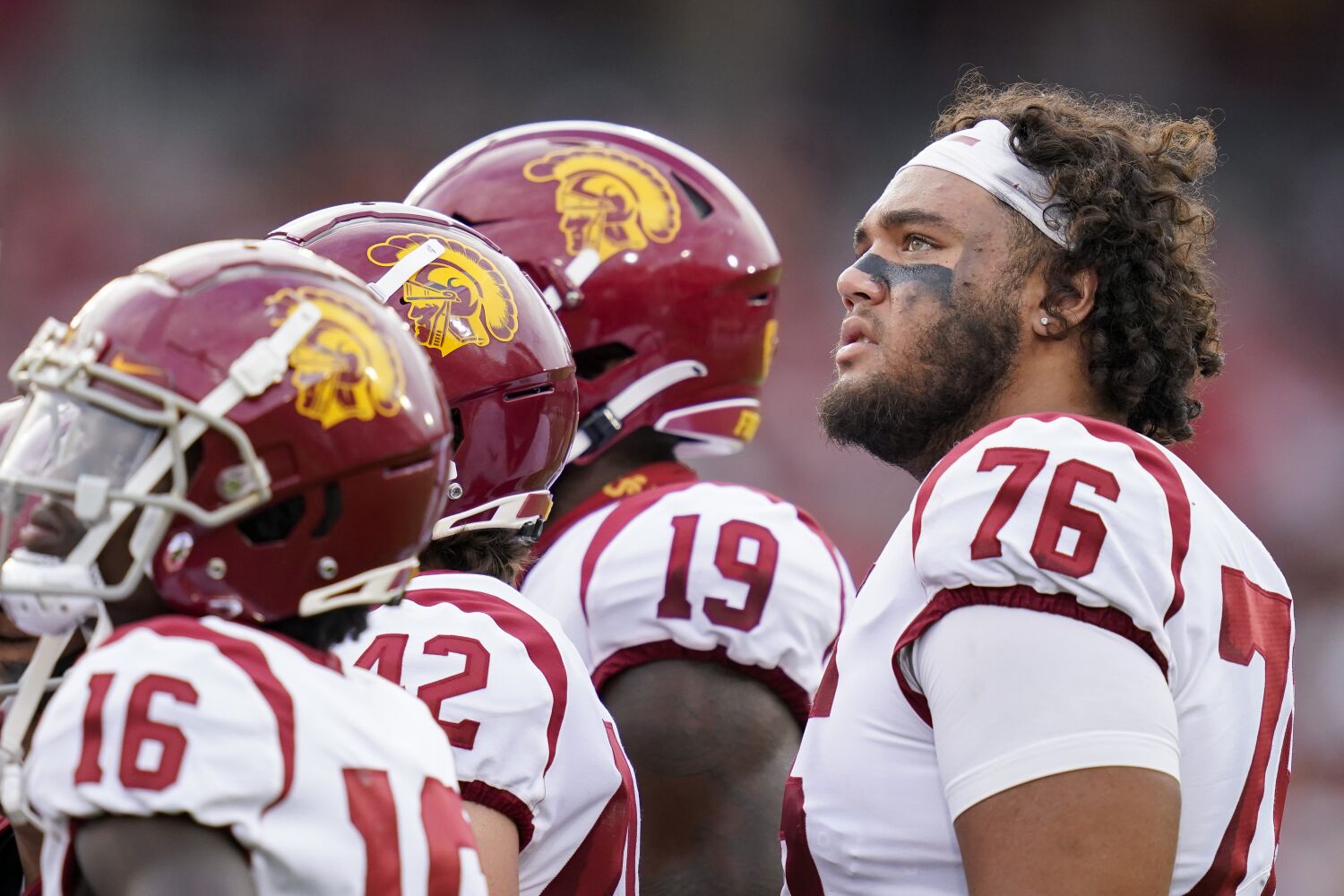 Last summer, when USC was first broken up into separate weightlifting sessions, Justin Dedich made a request. The redshirt senior and future captain wanted to move into the same group as redshirt rookie Mason Murphy.

Dedich had seen something special in young offensive tackle, and he wasn’t alone in USC’s experienced offensive line group. A few months later, when Murphy made his first start as USC’s right tackle Saturday against Arizona, Dedich and redshirt junior lineman Jonah Monheim both dubbed Murphy the Trojans’ “most talented” player up front.

“This boy has a lot ahead of him,” Dedich said, “and he’s working to get it.”

“No doubt,” added Monheim, “he’s such a talented boy.”

It took some time for this talent to develop. Not to mention the “tough love” of the linemen’s USC veterans, each of whom seems to have decided to take Murphy under their wing.

From those summer sessions onwards, they made a point of holding the young tackles accountable.

“Dedich and [center] board [Neilon] and Jonah and all these guys were on top of him and they pushed him and they’re a good example for him,” said USC coach Lincoln Riley. “And I agree with Mason, he’s being followed. We treated him harshly. He’s got real talent, he really has a chance to be a good player, but he needs to grow up and mature and really push forward.”

That development really accelerated this summer when Murphy was healed from a broken foot – and his colleagues on the lineman were closely monitoring his progress.

Few seem to recognize this talent on the recruiting path, where Murphy was a three-star prospect and the nation’s 48th offensive tackle, according to 247 Sports. Two years on, he’s at the heart of USC’s future plans along the offensive line, where the Trojans are likely to generate significant revenue in the offseason. Neilon, left tackle Bobby Haskins and left guard Andrew Vorhees will graduate, while Dedich has a final year of eligibility but could also declare himself for the draft.

USC got a glimpse of his future at the position last Saturday when Vorhees was out through injury. While Dedich flipped to the left and Monheim switched inside, Murphy stepped up on the right tackle.

Each of the USC linemen oozed confidence ahead of the redshirt rookie’s first start.

“We knew he was ready,” said Monheim. “[My advice was] Just go out there and don’t hesitate. You’re good enough, you’ve prepared well enough. Just let it fly, let it rip. We have his back no matter what. I told him that. I think he did.”

After four starters sat out the win against Arizona, Riley said his “gut feeling” was that some of USC’s injured players could return against California on Saturday.

Among this group of casualties are several key contributors who are critical to the Trojans’ stretch run. Wideouts Jordan Addison and Mario Williams, linebacker Eric Gentry and Vorhees all participated in some way in Tuesday’s practice, Riley said.

“We have a lot of guys that will be close for the game,” Riley said. “My gut feeling is that in the end we’ll probably get a few of them back, maybe not all of them. But very good progress. I don’t think I would definitely say anyone is safe in, I’m certainly in no position to say anyone is safe out now.