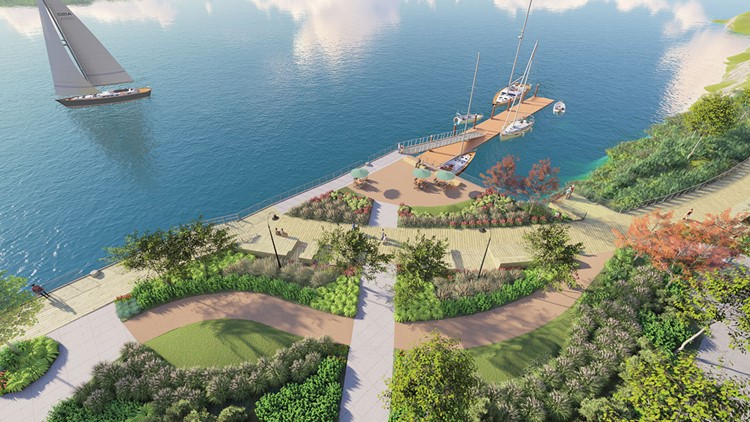 Vancouver Landing marks the beginning of the Port’s $500 million project to redevelop the Vancouver Waterfront.

“Your hard work and dedication to this project is incredible and I am so proud of our team,” said Julianna Marler, CEO of Port of Vancouver USA.

For the construction of Vancouver Landing, the Port transformed an old concrete amphitheater at the west end of the Vancouver Waterfront site into a more diverse and welcoming public space. Along with some open and grassy areas, it’s now a walk through history. There is information about the site on signs and even etched into the concrete sidewalk.

“Because it honors the story, which is very deep; not just our history here, but…the history of the tribes that have lived here for thousands of years,” said Port Commission President Jack Burkman.

Vancouver Landing is just the beginning of the $500 million Terminal 1 waterfront redevelopment project. The site will include a market and other facilities for tourists and locals alike. What is to come has been likened to Pike’s Place on the Seattle waterfront.

“And that kind of park environment is going to be a great place to grab a bite to eat and get back to enjoying nature right on the river,” said Port Commissioner Eric LaBrant.

He added: “It means even more access to water, which people really want, and economic development, which means more jobs. And people want jobs, too.”