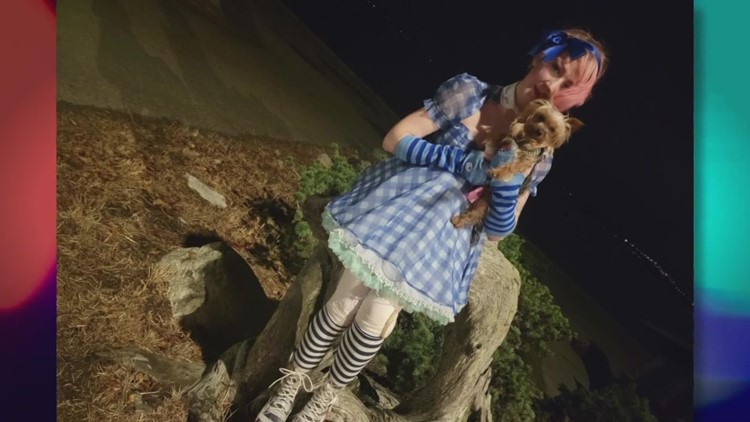 Ayla Matthews was walking her dog and playing Pokemon Go when someone shot her in her car near Alki Beach. Police are still looking for the suspect.

SEATTLE – Ayla Mathews is recovering after she was shot near Alki Beach in Seattle on Halloween night.

Mathews and a friend were dressing up and walking her dog while playing Pokemon Go when police said they were both injured in a drive-by shooting.

Mathews has been shot multiple times and has had to undergo two surgeries, but her husband says she hopes to be fine. The other victim was treated and discharged from the hospital.

“Obviously very painful and confused why it happened, and she asked the nurse ‘why did they have to shoot me?’ so many times,” said her husband, Jeremiah Olson.

The couple lives in the area. Olson said he remembers hearing gunfire.

“I started calling her and couldn’t get hold of her and you don’t want to think the worst, but I started to panic because I knew she was out there somewhere,” Olson said.

A neighbor called Olson and told him there had been a shooting, and that Mathew and her friend were the victims.

“I ran down there as fast as I could and saw her lying on the ground. In the meantime, I tried to stay calm and not let her see that I was panicking,” Olson said.

Olson said there was another group of people walking near his wife at the time of the shooting who may have seen who was responsible.

“Those people are the best witnesses so I really hope they keep going,” Olson said.

GoFundMe was set up to help Mathews cover medical expenses.

SPD Public Information Officer Valerie Carson said Monday night it appeared the suspect and victim did not know each other.

SPD said responders interviewed witnesses and collected more than two dozen shell casings from the scene. According to a post by SPD Blotter, the shooting suspects fled the scene in a brightly colored SUV.

Officers searched the area Monday night but were unable to find the suspects or the vehicle believed to be involved in the shooting. No other suspect information has been released at this time.

Column: Verlander has Astros a win away from World Series title

Review: More bleak comedy than black, 'The Estate' is not worth your time (or Toni Collette's)