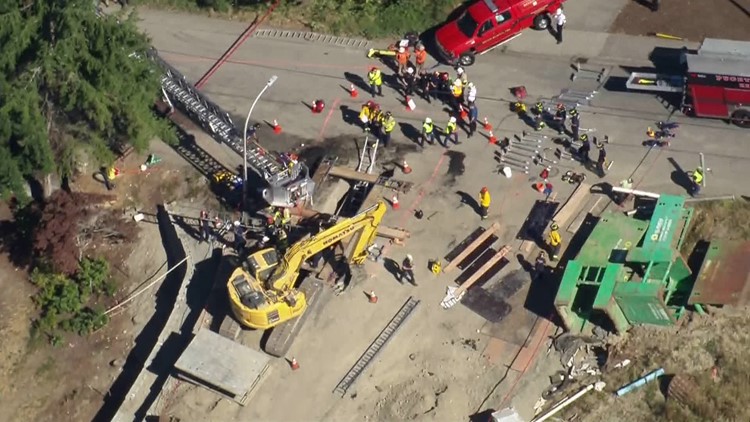 The collapse occurred at NE 38th Street and NE Lincoln Avenue, according to the Renton Regional Fire Authority.

RENTON, Wash. — One person was killed after a ditch collapsed at a construction site in Renton Wednesday afternoon.

The collapse occurred at NE 38th Street and NE Lincoln Avenue, according to the Renton Regional Fire Authority.

The collapse happened just before 1 p.m., according to Pat Pawlak, a spokesman for the Puget Sound Regional Fire Authority.

The victim’s body was removed around 8:40 p.m

The victim was reportedly covered by about 10 feet of dirt.

When firefighters first arrived at the scene, the victim was partially uncovered and had no pulse, Pawlak said.

Fire officials said there was a trench box, a steel box to protect workers, but there were some areas not protected by the trench box.

The ditch is about 20 feet deep.

The Washington State Department of Labor and Industry will investigate what protective measures were in place and what caused the trench to collapse.

The contractor on the website is AAA Contractors. The company declined to comment on the victim’s death.

Drew Woodruff, a trench safety expert at DP Nicoli, a company that specializes in safety equipment, said the number of trench deaths has increased so far this year compared to last year.

“It only takes a second for something bad to happen,” Woodruff said.

Woodruff said that even a small amount of earth collapse is dangerous.

The victim’s identity was not released.

Memphis shooting: Ezekiel D. Kelly, man accused of killing 4 as he drove around city, has been arrested, police said