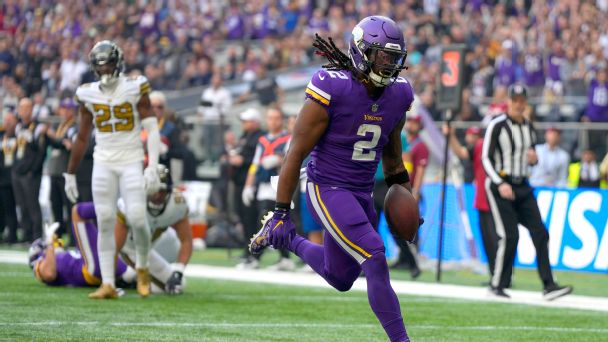 The Minnesota Vikings scored back-to-back touchdowns in their opening run on Sunday at Tottenham Hotspur Stadium in London. The second counted.

After KJ Osborn’s 5-yard touchdown reception was recalled by an offensive pass interference penalty, running back Alexander Mattison hit with a 15-yard screen pass from quarterback Kirk Cousins. Mattison, who plays Sunday’s third down as starter Dalvin Cook suffers from a shoulder injury, broke two tackles and benefited from a great block by left tackle Christian Darrisaw to scurry into the end zone.

With an apparent nod towards the Londoners seated around him in the stands, Mattison celebrated the touchdown by pretending to be drinking tea. The result gave the Vikings a 7-0 lead with 8:24 remaining in the first quarter.

Police: Man shot and killed on front porch of his home in Northeast Philadelphia