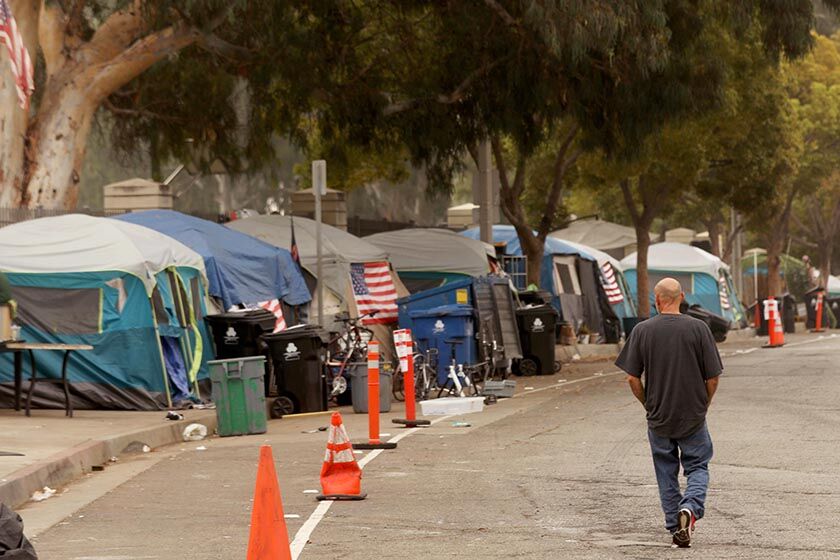 California voters strongly support Gov. Gavin Newsom’s plan to create a new court system for people struggling with a combination of severe mental illness, homelessness and drug use, but split with the governor over requiring children to attend kindergarten, as a new poll shows.

Newsom presented its sweeping proposal to the Community Assistance, Recovery and Empowerment (CARE) Court earlier this year amid growing concerns about the number of people living on California’s streets during a crisis. The CARE Court codification bill, Senate Bill 1338, passed the legislature easily with bipartisan support, and Newsom signed the measure into law last month.

Civil and disability rights groups spent most of the legislature in fierce opposition to the CARE Court over concerns that the new law could criminalize homelessness and force people with mental illness into treatment.

Despite these fears, voters expressed overwhelming support for the new law, according to a new UC Berkeley Institute of Governmental Studies poll co-sponsored by the Los Angeles Times. The poll asked voters if they would support the plan, which would provide “court-ordered treatment for Californians struggling with serious mental illness, including the homeless,” and noted that “the CARE Court would have the authority to make a… Ordering mental health treatment for people with severe mental illness, even if they have not sought it.”

76% of registered voters said they favor CARE Court, including 41% who said they strongly supported the idea. 15% opposed the plan, while 9% expressed no opinion.

Support was consistent across all political parties, with 80% of registered Democrats, 69% of Republicans and 74% who identify as non-partisan saying they support the new law. Widespread acceptance of CARE Court remained stable across race, income, age, and gender.

“There is strong bipartisan support for CARE Court,”
said Berkeley IGS survey director Mark DiCamillo. “People want everything to be done to get these mentally ill people off the streets. I mean it’s overwhelming.”

Proponents have called the new law a paradigm shift aimed at treating people who have been cycling in and out of prisons and hospitals, heading towards more restrictive, court-ordered conservatorship.

An estimated 7,000 to 12,000 people nationwide are expected to qualify for CARE Court, a population restricted to those most at risk of death or serious harm as a result of their conditions.

Not everyone would have to be homeless to qualify for a CARE plan, but the new court system was designed to focus on those with a substance use disorder who have been diagnosed with a serious mental illness, such as schizophrenia.

To initiate a CARE plan, family members, first responders, healthcare professionals, and behavioral health professionals could petition a judge to order an individual adult assessment. If it is determined that the person would benefit from medication and behavioral therapy treatment, the court could order a CARE plan that includes services and housing appropriate to their needs for up to two years.

California voters parted ways with Newsom on another popular program, passed by the Legislature this year, that would have made kindergarten compulsory for all children in California. Newsom vetoed the bill, citing an estimated annual cost of $268 million, though he had been a strong advocate for early education programs during his time as governor.

The poll found that 57% of likely voters supported making kindergarten compulsory, while 33% opposed it. However, support was split along party lines, with 70% of Democrats supporting the proposed legislation and 58% of Republicans opposed. No party preference voters supported compulsory kindergarten with a majority of 56% to 33%.

“The Democrats and the Liberals were very strong behind this idea,” DiCamillo said. “It’s kind of counterintuitive that Newsom vetoed it. I don’t really get it because he advocated for early childhood education.”

Senate Bill 70, written by Senator Susan Rubio (D-Baldwin Park), would have required children to complete a year of kindergarten before entering first grade, beginning in the 2024-25 school year.

Dozens of school districts and education groups backed the bill, citing academic setbacks experienced during the COVID-19 pandemic when parents turned down kindergarten to avoid problems with distance learning.

Like most states, California does not mandate kindergarten like other classes do. California children who are 5 years old are eligible for preschool, but are not required by law to attend school until they are 6 years old.

The Berkeley IGS poll was conducted online September 22-27 among 8,725 California-registered voters. The sample was weighted to match census and voter registration benchmarks. Accurate estimates of margin of error are difficult because of the weighting, but the results are estimated to have a margin of error of about 2 percentage points in either direction for the entire sample.

10 Best Star Wars Legends Characters That Should Be Canon

‘Still in disbelief’: Wife of victim in fatal hit-and-run calls on driver to take responsibility